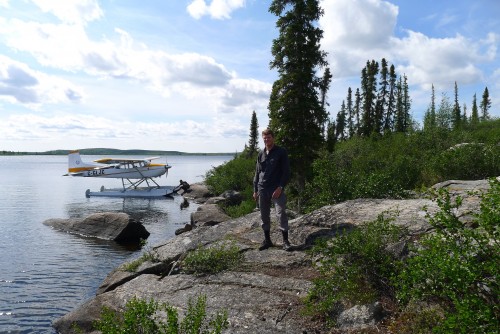 Jesse Reimink in the Northwest Territories, roughly 300km North of Yellowknife near the field locality of one of the world's oldest rock formations 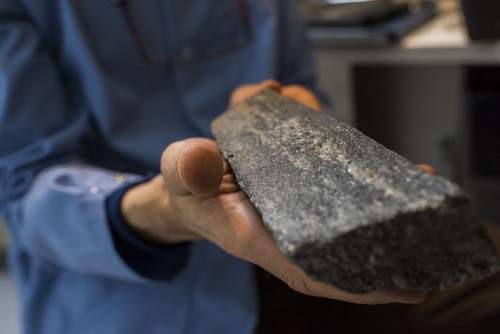 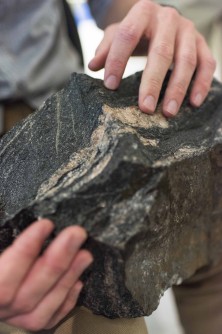 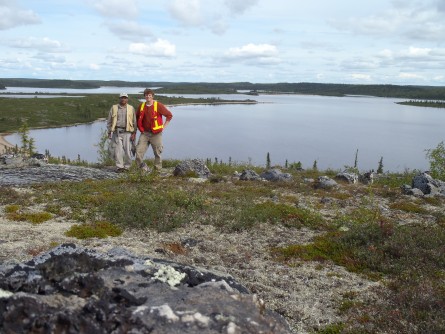 Jesse Reimink with his supervisor Tom Chacko on the left

EDMONTON (September 19, 2016, 9am MST/11am EST)—Addressing fundamental unknowns about the earliest history of Earth’s crust, scientists have precisely dated the world’s oldest rock unit at 4.02 billion years old. Driven by the University of Alberta, the findings suggest that early Earth was largely covered with an oceanic crust-like surface.

“It gives us important information about how the early continents formed,” says lead author Jesse Reimink. “Because it’s so far back in time, we have to grasp at every piece of evidence we can. We have very few data points with which to evaluate what was happening on Earth at this time.” In fact, only three locations worldwide exist with rocks or minerals older than 4 billion years old: one from Northern Quebec, mineral grains from Western Australia, and the rock formation from Canada’s Northwest Territories examined in this new study.

While it is well known that the oldest rocks formed prior to 4 billion years ago, the unique twist on Reimink’s rock is the presence of well-preserved grains of the mineral zircon, leaving no doubt about the date it formed. The sample in question was found during fieldwork by Reimink’s PhD supervisor, Tom Chacko, in an area roughly 300 kilometres north of Yellowknife. Reimink recently completed his PhD at the University of Alberta before starting a post-doctoral fellowship at the Carnegie Institute for Science in Washington, D.C.

He explains that the chemistry of the rock itself looks like rocks that are forming today in modern Iceland, which is transitional between oceanic and continental crust. In fact, Iceland has been hypothesized as an analog for how continental crusts started to form.

“We examined the rock itself to analyze those chemical signatures to explore the way that the magma intrudes into the surrounding rock.” One signature in particular recorded the assimilation step of magma from Earth’s crust. “While the magma cooled, it simultaneously heated up and melted the rock around it, and we have evidence for that.”

Reimink says that the lack of signatures of continental crust in this rock, different from what the early continents were expected to look like, leads to more questions than answers. Reimink says one of the biggest challenges as a geologist is that as we travel back in time on Earth, the quantity and quality of available evidence decreases. “Earth is constantly recycling itself, the crust is being deformed or melted, and pre-history is being erased,” remarks Reimink.

“The presence of continents above water and exposed to the atmosphere has huge implications in atmospheric chemistry and the presence or absence of life. The amount of continents on Earth has a large chemical influence both on processes in the deep Earth (mantle and core) and at the Earth’s surface (atmosphere and biosphere). There are constant feedback loops between chemistry and geology. Though there are still a lot of unknowns, this is just one example that everything on Earth is intertwined.”“No evidence for Hadean continental crust within Earth’s oldest evolved rock unit” appears in the October issue of Nature Geoscience.