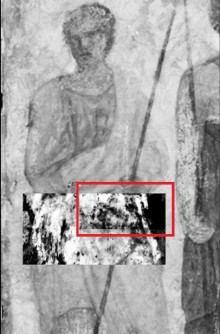 Terahertz rays unveil for the first time a hidden image (red box) of a man’s face under the surface of a famous fresco, or mural, in Paris’ Louvre Museum.

Newswise — NEW ORLEANS, April 10, 2013 — In the latest achievement in efforts to see what may lie underneath the surface of great works of art, scientists today described the first use of an imaging technology like that used in airport whole-body security scanners to detect the face of an ancient Roman man hidden below the surface of a wall painting in the Louvre Museum in Paris.

They described unveiling the image, which scientists and art historians say may be thousands of years old, during the 245th National Meeting & Exposition of the American Chemical Society, the world’s largest scientific society. The meeting, with almost 12,000 presentations, continues here through Thursday.

J. Bianca Jackson, Ph.D., who reported on the project, explained that it involved a fresco, which is a mural or painting done on a wall after application of fresh plaster. In a fresco, the artist’s paint seeps into the wet plaster and sets as the plaster dries. The painting becomes part of the wall. The earliest known frescoes date to about 1500 B.C. and were found on the island of Crete in Greece.

“No previous imaging technique, including almost half a dozen commonly used to detect hidden images below paintings, forged signatures of artists and other information not visible on the surface has revealed a lost image in this fresco,” Jackson said. “This opens to door to wider use of the technology in the world of art, and we also used the method to study a Russian religious icon and the walls of a mud hut in one of humanity’s first settlements in what was ancient Turkey.”

The technology is a new addition to the palette that art conservators and scientists use to see below the surface and detect changes, including fake signatures and other alterations in a painting. Termed terahertz spectroscopy, it uses beams of electromagnetic radiation that lie between microwaves, like those used in kitchen ovens, and the infrared rays used in TV remote controls. This radiation is relatively weak, does not damage paintings and does not involve exposure to harmful radiation.

“Terahertz technology has been in use for some time, especially in quality control in the pharmaceutical industry to assure the integrity of pills and capsules, in biomedical imaging and even in homeland security with those whole-body scanners that see beneath clothing at airport security check points,” said Jackson, who is now with the University of Rochester. “But its use in examining artifacts and artworks is relatively new.” Artists, including some of the great masters, sometimes re-used canvases, wiping out the initial image or covered old paintings with new works. They often did this in order to avoid the expense of buying a new canvas or to enhance colors and shapes in a prior composition. Frescoes likewise got a refresh, especially when the originals faded, owners tired of the image on the wall or property changed hands.

The scientists turned to terahertz technology when suspicions surfaced that a hidden image might lie beneath the brushstrokes of a precious 19th century fresco, Trois homes armés de lances, in the Louvre’s Campana collection. Giampietro Campana was an Italian art collector in the 1800s whose treasures are now on display in museums around the world. When Campana acquired a work of art, he sometimes restored damaged parts or reworked the original. Art historians believe that Campana painted Trois homes armés de lances after the fresco was removed from its original wall in Italy and entered his collection.

Jackson said that Campana’s painting in itself is valuable, and the terahertz revelations may have added value by showing that an authentic Roman fresco lies under it.

To search for a hidden image, Jackson and colleagues, including Gerard Mourou, Ph.D., of Ècole Polytechnique, and Michel Menu, Ph.D., of the Centre de Recherche et de Restauration des Musées de France, and Vincent Detalle, of the Laboratoire Recherche des Monuments Historiques, probed it with terahertz technology. The process is slow, requiring a few hours to analyze a section the size of a sheet of paper.

“We were amazed, and we were delighted,” said Jackson. “We could not believe our eyes as the image materialized on the screen. Underneath the top painting of the folds of a man’s tunic, we saw an eye, a nose and then a mouth appear. We were seeing what likely was part of an ancient Roman fresco, thousands of years old.”

Who is the man in the fresco? An imperial Roman senator? A patrician? A plebian? A great orator? A ruler who changed the course of history? Or just a wealthy, egotistical landowner who wanted to admire his image on the wall?

Jackson is leaving those questions to art historians. The team already has moved ahead and used terahertz technology to study a Russian religious icon and the walls of a mud hut in one of the earliest known human settlements in what now is the country of Turkey.

This research was funded by the European Commission's 7th Framework Program project CHARISMA (grant agreement no. 228330) and in part by AHRC/EPSRC Science and Heritage Programme. Access was provided by the Louvre Museum and the Institute Nationale Patrimoine.

Abstract Terahertz pulse imaging and spectroscopy is emerging as a tool of high potential for the nondestructive investigation of historical artworks, architecture and archaeological objects for the purpose of research and conservation. We studied a section of the fresco Trois hommes armés de lances from the Louvre's Campana collection using time-domain terahertz imaging. The top painting is 19th C, while the support is composed of wall sections recovered from Roman ruins. No previous technique, including X-ray radiography, XRF, infrared photography, infrared reflectometry and UV florescence, has produced an image of a lost fresco beneath the painting. A composite of the photograph of the section and the composite terahertz image reveals a face hidden beneath the 1st man's drape. Other examples of this application will also be presented, including a Russian icon, a wall painting from the Riga Dom cathedral and a Neolithic site from Catalhoyuk Turkey.