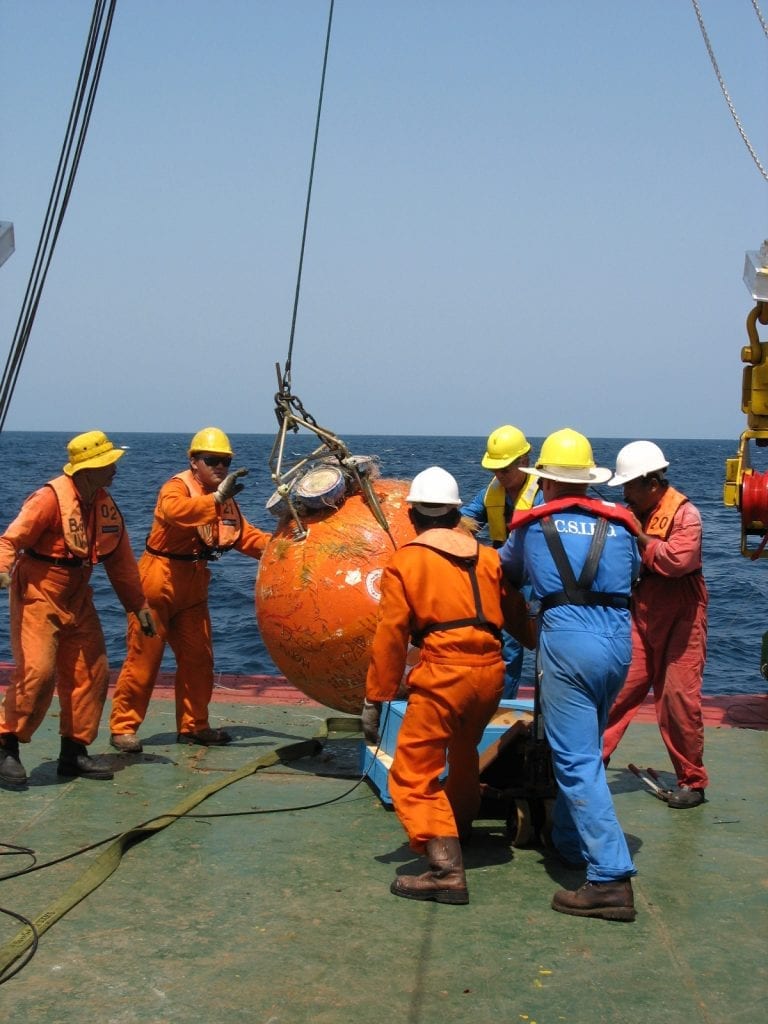 Recovery of the South Ombai mooring, topped with an Acoustic Doppler Current Meter (ADCP) to measures ocean currents, aboard the Indonesian Research Vessel Baruna Jaya I. Observational data in the Indian Ocean is sparse and in situ observations are key to determining heat input to the Indian Ocean. Photo credit: Janet Sprintall 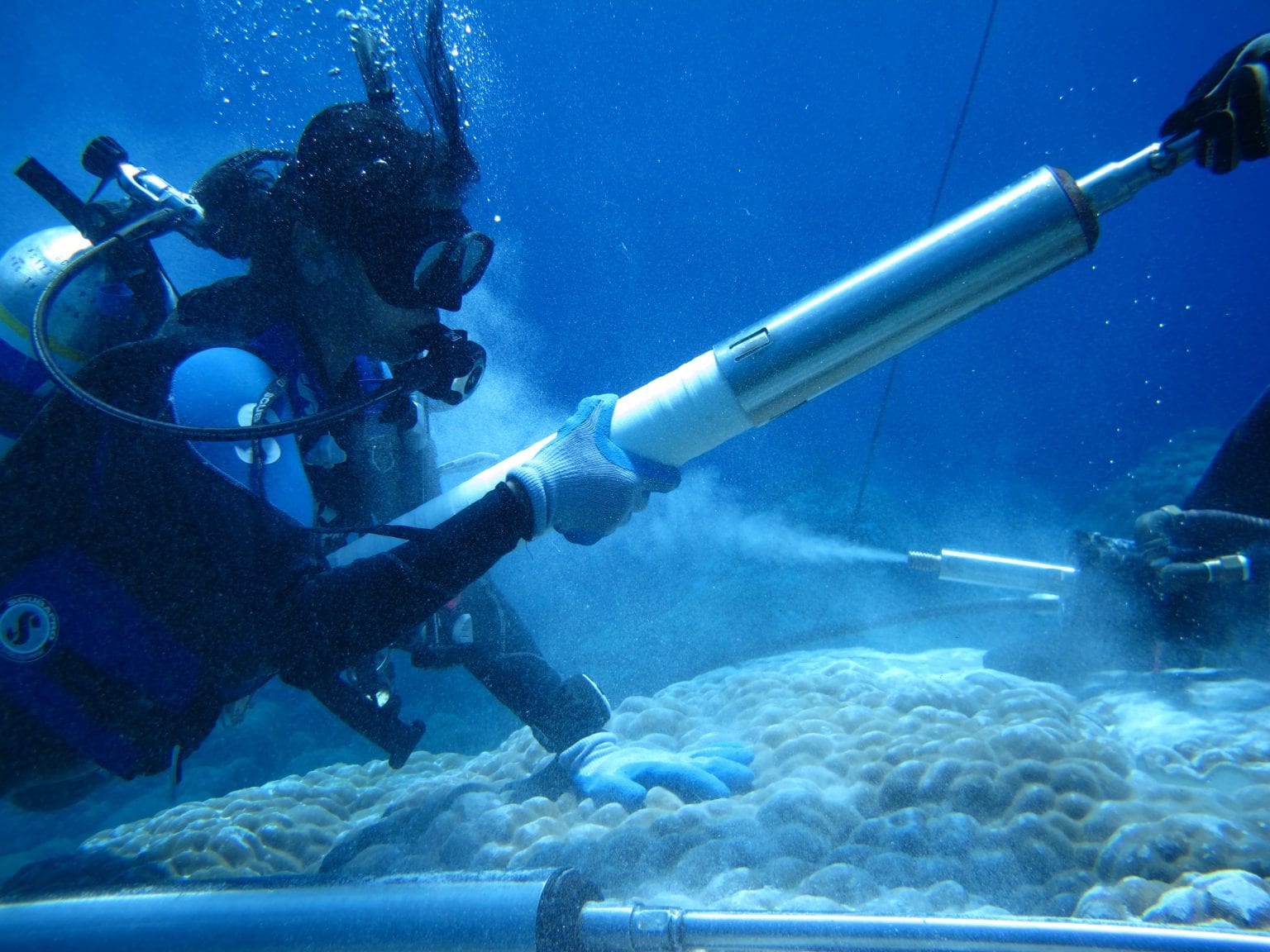 Newswise — The Indian Ocean has been warming much more than other ocean basins over the last 50-60 years. While temperature changes basin-wide can be unequivocally attributed to human-induced climate change, it is difficult to assess whether contemporary heat and freshwater changes in the Indian Ocean since 1980 represent an anthropogenically-forced transformation of the hydrological cycle. What complicates the assessment is factoring in natural variations, regional-scale trends, a short observational record, climate model uncertainties, and the ocean basin’s complex circulation.

A new review paper takes a broad look at whether heat and freshwater changes in the Indian Ocean are consistent with the increase in rainfall that is expected in response to anthropogenic global warming or whether these changes are due to natural variability on multi-decadal and other timescales along with other factors. That distinction has “big implications for climate risk assessment and for the densely populated regions around the Indian Ocean that are vulnerable to the effects of climate change,” says Caroline Ummenhofer, lead author of the paper, Heat and freshwater changes in the Indian Ocean region, published in Nature Reviews Earth & Environment.

The paper brings together various scientific expertise, tools, and data sources to address key questions regarding climate change in the Indian Ocean, says Ummenhofer, associate scientist in the Physical Oceanography Department at the Woods Hole Oceanographic Institution (WHOI). “The different scientific communities need to come together and have very open discussions about what we can tell from our data, how we can compare apples and oranges, and how we can bring all of this information together to have a better understanding of the entire Indian Ocean system,” she says.

“Rather than rely on climate models that struggle to accurately represent the complex circulation, we look at many different observational records including measurements of sea level, and the ocean surface and subsurface temperature and salinity,” says co-author Janet Sprintall, a research oceanographer at the Scripps Institution of Oceanography, University of California San Diego.

While some changes in the Indian Ocean appear to be a consistent response to anthropogenic global warming, “in general our ocean observational records are still far too short to distinguish the naturally driven variability from the man-made changes,” says Sprintall. “This tells us that we need to continue measuring our oceans—particularly below the surface—so that we can better understand these long-term changes and their causes, and so that we can improve our prediction and response to them.”

Quantifying the changes in the Indian Ocean heat and freshwater balance warrants a multi-pronged approach across temporal and spatial scales that integrates in situ observations (including Argo floats robotically programmed to measure ocean temperature, salinity, and other properties; moorings; and buoys), remote sensing by satellites to measure rainfall and sea surface salinity, improved numerical modelling simulations, and paleoclimate proxy networks, the authors note.

Corals are an important paleoclimate archive in the ocean because their calcium carbonate skeletons incorporate the chemical properties of past oceans and so reflect past climate and environmental conditions. “Corals are unique environmental archives that allow us to extend our understanding of Indian Ocean variability centuries farther back in time than the observational record,” says co-author Sujata Murty, WHOI adjunct scientist and assistant professor in the Department of Atmospheric and Environmental Sciences at the University at Albany, State University of New York. “Including the long-term perspective provided by corals alongside that of observations and remote sensing data enriches our understanding of complex climate and ocean systems and improves our ability to anticipate future changes in a warming world.”

Maintaining and expanding current remote sensing, in situ observations, and a network of paleo proxies is “crucial” for “disentangling the effects of multi-decadal natural variability and anthropogenic change on heat and freshwater changes” in the Indian Ocean and the Maritime Continent region between the Indian and Pacific oceans, according to the paper.

The Indian Ocean, the paper notes, “is particularly vulnerable to anthropogenic climate change,” in part because the ocean is bounded to the north by the Asian continent. This means that heat from the Pacific Ocean that enters the Indian Ocean through the Indonesian Seas cannot easily exit the basin.

The basin “could be a kind of canary in a coal mine,” says Ummenhofer, because those changes now being observed in the Indian Ocean also could happen in other oceans. “We can all benefit from having better observations and a better understanding of the ocean so that we can know whether the changes are a climate change signal or part of a natural cycle.”

Caption: Recovery of the South Ombai mooring, topped with an Acoustic Doppler Current Meter (ADCP) to measures ocean currents, aboard the Indonesian Research Vessel Baruna Jaya I. Observational data in the Indian Ocean is sparse and in situ observations are key to determining heat input to the Indian Ocean. Photo credit: Janet Sprintall