Rewriting the History of the Autobiographical Graphic Novel 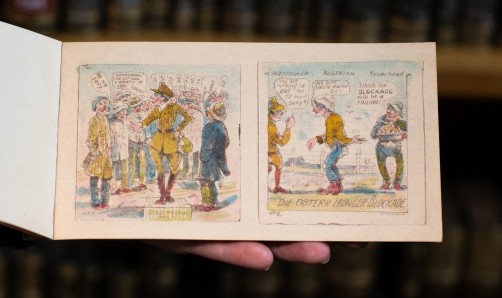 The Voyage and Adventures of a Good Little German in Kangarooland comic. 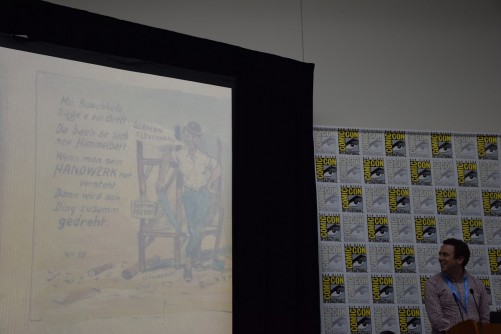 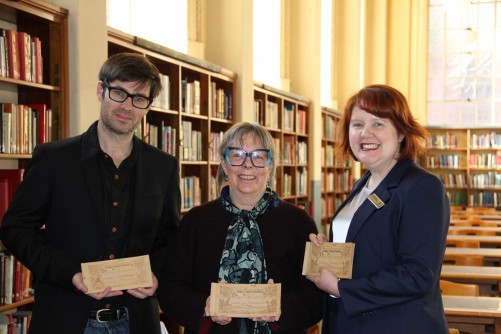 Researchers at the University of Adelaide believe what might be the earliest autobiographical graphic novel is held in the University Library’s Special Collections, thanks to a recent generous donation from an alumna. The collection predates the idea that comic books began in the 1970s.

The autobiographical graphic novel was drawn by C. Friedrich, a previously unknown German cartoonist, while he was detained between 1916 and 1919 in an Australian internment camp.

Dr Aaron Humphrey, Lecturer in Media and Digital Humanities, and Dr Simon Walsh, Lecturer in German Studies, from the School of Humanities at University of Adelaide, have researched this unique material extensively.

“Voyage and Adventures of a Good Little German in Kangarooland, features an autobiographical character who begins a new life in Australia. Upon arrival he is suspected of being a spy during World War I and is sent to the Holsworthy internment camp in Liverpool, New South Wales, the same camp where Friedrich was detained.

“While autobiographical graphic novels have become a very popular literary genre during the 21st century, their history is generally assumed to begin with underground comix – small press or self-published comic books – in the 1970s. This discovery, from nearly half a century earlier, calls that history into question”, says Dr Humphrey.

Dr Humphrey is presenting his and Dr Walsh’s research at the 2022 Comic-Con International in San Diego, which runs from Thursday 21 to Sunday 24 July.

The comics paints a portrait of life and struggles in the camp. The University’s experts say this subject matter is still relevant today.

“Friedrich’s stories emphasise the struggles of detainees, and points to the human and emotional cost of borders. Differences in language and national identities are not insurmountable. Instead, it is the fences, bayonets and draconian systems of detention that are enacted without due cause, which separate people from each other and their shared humanity,” says Dr Walsh.

“This is a remarkable document of the German-Australian experience during World War I, a significant part of Australia’s cultural heritage, and holds international importance as an early example of one of the great literary innovations of the 20th century.”

Friedrich has since passed into obscurity, and it’s unknown if this was his real name or a pseudonym. Despite this, his work lives on in the University Library’s Special Collections, thanks to a recent donation from University of Adelaide alumna Sally Goers Fox on behalf of the Goers family.

“The comics were brought back from the internment camp by my great uncle, Hermann Carl “Charlie” Goers, the wartime editor of a local Barossa Valley newspaper, who was imprisoned alongside Friedrich due to his German origins, despite being born in Australia.” Ms Goers Fox explains.

“I donated the comics to the University of Adelaide to ensure that the history of the camps, and the experiences of the prisoners, are remembered. It is appropriate that the comics be kept in the University’s Library where they will be read, researched, and appreciated for years to come.”

Ms Goers Fox’s donation, consisting of five small books, is the only full collection of all five of Friedrich’s books known to exist.

The University Library’s Special Collections have digitalised the five books, which are accessible via Adelaide Connect. Adelaide Connect is open access to historical resources, making these books available to anyone, anywhere in the world.