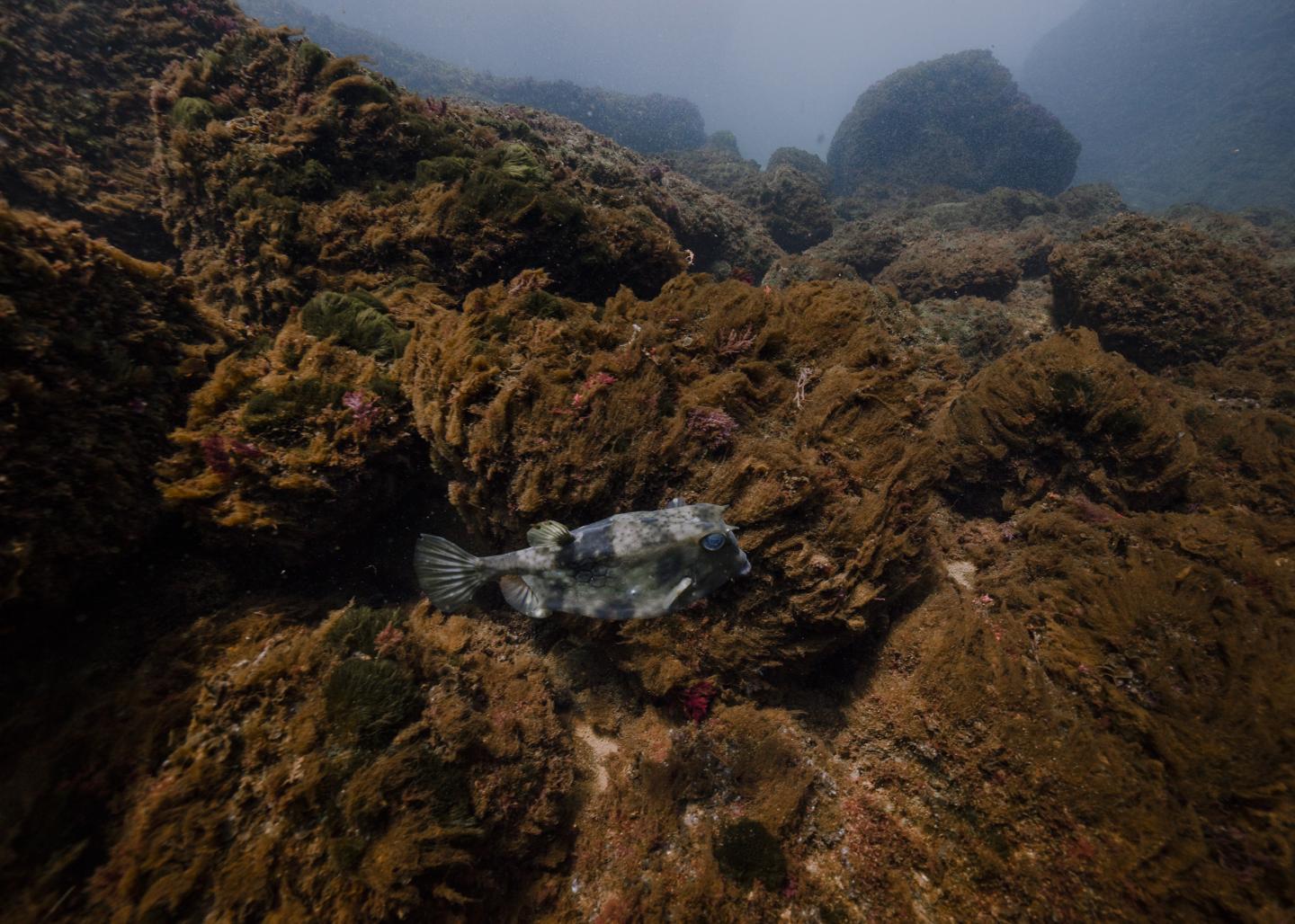 A boxfish swimming above dense mats of diatoms in the high CO2 site along the Shikine volcanic gradient. 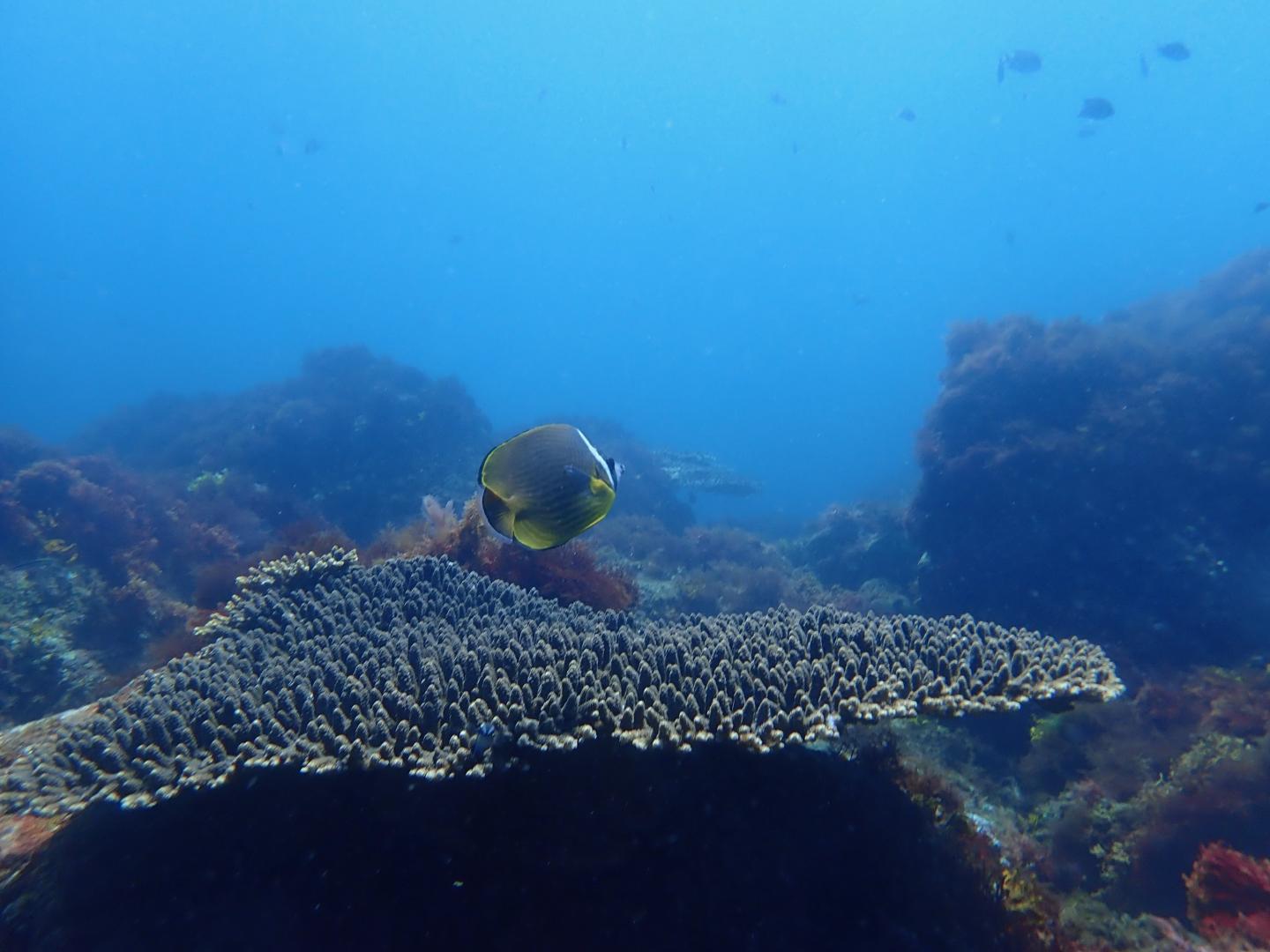 A butterflyfish swimming above a colony of the coral table Acropora solitaryensis at the Control CO2 sites off Shikine Island.

Newswise — Rising carbon dioxide in the atmosphere and the consequent changes created through ocean acidification will cause severe ecosystem effects, impacting reef-forming habitats and the associated fish, according to new research.

Using submerged natural CO2 seeps off the Japanese Island of Shikine, an international team of marine biologists showed that even slightly higher CO2 concentrations than those existing today may cause profound changes in marine habitats and the fish that rely on them.

Writing in Science of The Total Environment, researchers from the Universities of Palermo (Italy), Tsukuba (Japan) and Plymouth (UK) showed that under elevated dissolved CO2 conditions, habitats are dominated by few ephemeral algae.

In such conditions, species such as complex corals and canopy-forming macroalgae mostly disappeared. This shift from complex reefs to habitats dominated by opportunistic low-profile algae led to a 45% decrease of fish diversity, with a loss of coral-associated species and a rearrangement of feeding behaviour.

Lead author Dr Carlo Cattano, from the University of Palermo, said: "Our findings show that the CO2-induced habitat shifts and food web simplification, which we observed along a volcanic gradient in a climatic transition zone, will impact specialist tropical species favouring temperate generalist fish. Our data also suggests that near-future projected ocean acidification levels will oppose the ongoing poleward expansion of corals (and consequently of reef-associated fish) due to global warming."

"Submerged volcanic degassing systems may provide realistic insights into future ocean conditions," added Dr Sylvain Agostini, from Shimoda Marine Research Center. "Studying organism and ecosystem responses off submerged CO2 seeps may help us to understand how the oceans will look in the future if anthropogenic CO2 emissions won't be reduced."

In addition to the new findings, the study also reinforces previous research which has demonstrated the ecological effects of habitat changes due to ongoing ocean acidification.

This has shown that decreased seawater pH may impair calcification and accelerate dissolution for many calcifying habitat-formers, while rising CO2 concentrations may favour non-calcifying autotrophs enhancing the primary production and carbon fixation rates.

As a result, there will be losers and winners under increasingly acidified conditions, and fish species that rely on specific resources during their different life stages could disappear. This would lead to the composition of fish communities changing in the near future with potential severe consequences for marine ecosystem functioning and the goods and services they provide to humans.

Jason Hall-Spencer, Professor of Marine Biology at the University of Plymouth, said: "Our work at underwater volcanic seeps shows that coastal fish are strongly affected by ocean acidification, with far fewer varieties of fish able to cope with the effects of carbon dioxide in the water. This underlines the importance of reducing greenhouse gas emissions to safeguard ocean resources for the future."

Caption: A boxfish swimming above dense mats of diatoms in the high CO2 site along the Shikine volcanic gradient.

Caption: A butterflyfish swimming above a colony of the coral table Acropora solitaryensis at the Control CO2 sites off Shikine Island.