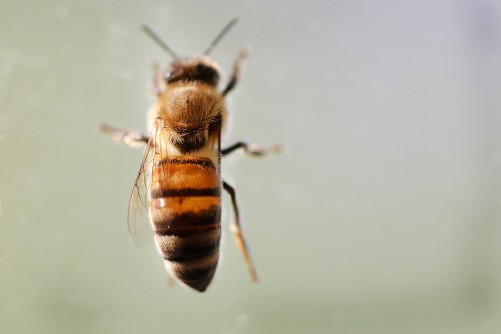 Bees rely on goldenrod pollen as a food source, but it's less nutritious than it used to be, a Purdue study finds.

Researchers found that the overall protein concentration of goldenrod pollen fell about one-third from the onset of the Industrial Revolution to the beginning of the 21st century.

Previous studies have shown that increases in carbon dioxide can lower the nutritional value of plants such as wheat and rice - staple crops for much of the global human population - but this study is the first to examine the effects of rising CO2 on the diet of bees.

"Bee food is less nutritious than it used to be," said Jeffrey Dukes, study co-author and professor of forestry and natural resources and biological sciences. "Our findings also suggest that the quality of pollen will continue to decline into the future. That's not great news for bees."

Native bee species and honeybees rely on flowering plants for energy and nutrition. While nectar is the primary energy source for bee colonies, pollen is the sole source of protein for bees. Pollen is essential for the development of bee larvae and helps maintain bees' immunity to pathogens and parasites.

Goldenrod, a common North American perennial that blooms from late July through October, offers bees some of the last available pollen before winter. Bees that overwinter must store substantial amounts of pollen to rear their winter young. Declines in pollen protein could potentially threaten bee health and survival and weaken bees' ability to overwinter on a continental scale, said Jeffery Pettis, study co-author and research entomologist with the U.S. Department of Agriculture's Agricultural Research Service.

The researchers noted, however, that this study only assessed pollen protein levels and did not look at the impact of protein reductions on bee health and populations.

"Our work suggests there is a strong possibility that decreases in pollen protein could contribute to declines in bee health, but we haven't yet made that final link," said Dukes, who is also director of the Purdue Climate Change Research Center housed in Discovery Park.

Dukes collaborated with a team led by USDA-ARS researchers to examine protein levels in historical and experimental samples of goldenrod pollen. They found that pollen protein levels dropped about a third in samples collected from 1842-2014, a period during which the amount of carbon dioxide in the Earth's atmosphere rose from about 280 parts per million to 398 ppm. The greatest drop in protein occurred during 1960-2014, a time when atmospheric carbon dioxide levels rose dramatically.

"These data provide an urgent and compelling case for establishing CO2 sensitivity of pollen protein for other floral species," the researchers concluded in their study.

Bees provide a valuable service to U.S. agriculture through pollination, contributing more than $15 billion in added crop value each year.

But a number of new and mounting pressures are crippling colonies and endangering bee populations. These threats include emerging diseases and parasites such as deformed wing virus, Varroa mites and Nosema fungi; a lack of diversity and availability of pollen and nectar sources; and exposure to a wide variety of pesticides. From 2006 to 2011, annual losses of managed honeybee colonies averaged about 33 percent per year, according to the USDA-ARS.

"Bees already face a lot of factors that are making their lives hard," Dukes said. "A decline in the nutritional quality of their food source going into a critical season is another reason to be concerned."

Elevated levels of atmospheric carbon dioxide - a building block for plant sugars -have allowed many plants to grow faster and bigger. But this growth spurt can dilute plants' total protein, rather than concentrating it in the grain, resulting in a less nutritious food source.

"The impact of carbon emissions on the nutritional value of our food supply is something people need to be aware of. This issue isn't just relevant to honeybees and people - it will probably affect thousands or even millions of other plant-eating species around the world. We don't yet know how they'll deal with it."

The study was published in Proceedings of the Royal Society B on Wednesday (April 13) and is available to journal subscribers and on-campus readers at http://dx.doi.org/10.1098/rspb.2016.0414.

Researchers from Williams College, the Smithsonian Institution and the University of Maryland also co-authored the study.

The work was funded by the USDA-ARS.

5 Department of Forestry and Natural Resources and Department of Biological Sciences, Purdue University, West Lafayette, IN 47907,

At present there is substantive evidence that the nutritional content of agriculturally important food crops will decrease in response to rising levels of atmospheric carbon dioxide, Ca. However, whether Ca induced declines in nutritional quality are also occurring for pollinator species is unknown. Flowering late in the season, goldenrod (Solidago spp.) pollen is a widely available autumnal food source widely acknowledged by apiarists to be essential to native bee (e.g., Bombus spp.) and honeybee (Apis mellifera) health and winter survival.Using floral collections obtained from the Smithsonian Natural History Museum, we quantified Ca induced temporal changes in pollen protein concentration of Canada goldenrod (Solidago canadensis), the most widespread Solidago taxon, from hundreds of samples collected throughout the United States and southern Canada over the period 1842-2014 (i.e., a Ca from ~280 to 398 ppm). In addition, we conducted a two year in situ trial of S. canadensis populations grown along a continuous Ca gradient from ~280 to 500 ppm. The historical data indicated a strong significant correlation between recent increases in Ca and reductions in pollen protein concentration (r2 = 0.85). Experimental data confirmed this decrease in pollen protein concentration, and indicated that it would be ongoing as Ca continues to rise in the near term, i.e. to 500 ppm (r2 = 0.90). While additional data are needed to quantify the subsequent effects of reduced protein concentration for Canada goldenrod on bee health and populations, these results are the first to indicate that increasing Ca, can reduce protein content of a floral pollen source widely utilized by North American bees.