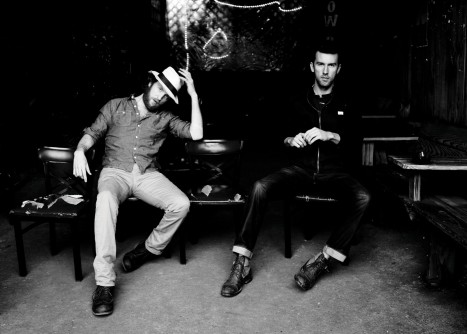 Certified as "One to Watch in 2014" by "Country Weekly" magazine, the Brothers Osborne will appear at The Julep Ball on May 2 benefiting the James Graham Brown Cancer Center at the University of Louisville.

Newswise — Two of the hottest acts making names for themselves in country music have just been added to the lineup of performers at The Julep Ball.

The duo Brothers Osborne, who recently dropped their latest single “Rum,” and Hart of Dixie and Anger Management star Laura Bell Bundy, whose country single “Giddy On Up” garnered over 4 million streams, will join J.D. Shelburne and the Bob Hardwick Sound on The Julep Ball stage.

The premier Derby Eve Party with a Purpose, The Julep Ball is held annually on the evening before the Kentucky Derby and supports the work of the James Graham Brown Cancer Center at the University of Louisville. The event on May 2 at the KFC Yum! Center kicks off with a 6:30 p.m. cocktail reception, followed by dinner and a live auction at 8 p.m.

An Official Event of the 140th Kentucky Derby®, The Julep Ball provides a celebrity-studded night to remember with a multi-course seated dinner, a knock-your-socks-off auction, multiple open specialty bars, complimentary valet parking, and dancing until the wee hours of Derby morning. A limited number of tickets to The Julep Ball are still available. The full evening’s entertainment is $600 per person, $5,000 for a table of 10, and $100 per person for dance-only tickets. For further information and to buy tickets, go to The Julep Ball website, julepball.org.

One of 15 acts chosen by Country Weekly as “Ones to Watch in 2014,” Brothers Osborne were chosen this month to open for Eric Church in his upcoming tour that includes a stop in Louisville at the KFC Yum! Center on Sept. 25.

The current Rolling Stone (April 24) hails the duo’s current single “Rum”: “There are plenty of drinking songs coming out of Nashville these days, but this twangy party anthem by a rising sibling duo from Maryland takes the genre to a whole new level of catchy fun. Sounds like a hit to us!”

For John and TJ Osborne, getting into music was unavoidable. Growing up in the water town of Deale, Md., their close-knit family of seven spent most nights not in front of the television, but writing and playing songs.

John (guitar) moved to Nashville first to play in other bands before TJ (vocals/guitar) joined him. It was then they formed Brothers Osborne and began playing as many writer rounds as they could. In April 2011, Warner Chappell/King Pen Music offered them a publishing deal. A year later, Capitol Records offered them a record deal. The Brothers Osborne are currently in the studio finishing their debut album, an album they describe as “aggressive, bold and fragile at times.” For more information, visit www.brothersosborne.com.

A Kentucky native, Laura Bell Bundy is a performer who has done it all: from appearing on the Broadway stage as Elle Woods in Legally Blonde – a role that garnered her a Tony Award nomination – Glinda in Wicked, and Amber Von Tussle in the original cast of Hairspray, to the launch of her country music career with a captivating performance on the nationally televised Academy of Country Music Awards, to acting in various film and TV roles including Dreamgirls, Jumanji, The Adventures of Huck Finn, MTV’s smash telecast of Legally Blonde, Guiding Light, CBS’s How I Met Your Mother, Malibu Country, Home Improvement and Cold Case. Bundy’s screen success has followed her to the web, where she has attracted a worldwide audience with her hit comedic web series, Cooter County, which she created, produced and directed.

Bundy released her debut country music album, Achin’ and Shakin’, in 2010, featuring her hit single “Giddy On Up,” which has since garnered over 4 million streams and has been certified gold in Norway. Her most recent singles, “Two Step” and “Kentucky Dirty,” push music boundaries and answer the question of what happens when you combine hot country, dance tracks and hip-hop beats.

Bundy currently can be seen on the CW’s hit television program Hart of Dixie and FX’s Anger Management, both of which are aired throughout the world. Her latest song release, “Kentucky Dirty” hit iTunes in November of 2013. The track references the singer’s good ole Kentucky roots. For more information, visit www.laurabellbundy.com.

The James Graham Brown Cancer Center is a key component of the University of Louisville Health Sciences Center. As part of the region's leading academic, research and teaching health center, the cancer center provides the latest medical advances to patients, often long before they become available in non-teaching settings. The JGBCC is a part of KentuckyOne Health and is affiliated with the Kentucky Cancer Program. It is the only cancer center in the region to use a unified approach to cancer care, with multidisciplinary teams of physicians working together to guide patients through diagnosis, treatment and recovery. For more information, visit our web site, www.browncancercenter.org.