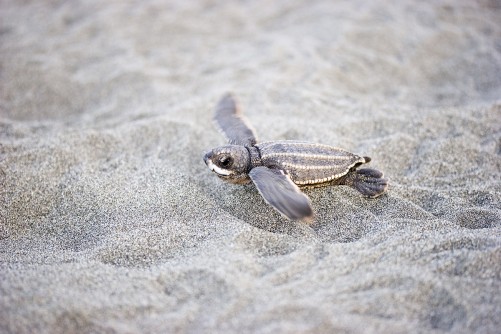 A leatherback turtle hatchling crosses the beach toward the ocean. Heat-related deaths of turtle eggs and hatchlings before they emerge from the nest was identified as a leading cause of projected climate-related decline of the eastern Pacific population of this critically endangered species, in a new study published in Nature Climate Change.

Newswise — PHILADELPHIA (July 1, 2012)—For eastern Pacific populations of leatherback turtles, the 21st century could be the last. New research suggests that climate change could exacerbate existing threats and nearly wipe out the population. Deaths of turtle eggs and hatchlings in nests buried at hotter, drier beaches are the leading projected cause of the potential climate-related decline, according to a new study in the journal Nature Climate Change by a research team from Drexel University, Princeton University, other institutions and government agencies.

Leatherbacks, the largest sea turtle species, are among the most critically endangered due to a combination of historical and ongoing threats including egg poaching at nesting beaches and juvenile and adult turtles being caught in fishing operations. The new research on climate dynamics suggests that climate change could impede this population’s ability to recover. If actual climate patterns follow projections in the study, the eastern Pacific population of leatherback turtles will decline by 75 percent by the year 2100.

Modeling the Ebb and Flow of Turtle Hatching with Climate Variation“We used three models of this leatherback population to construct a climate-forced population dynamics model. Two parts were based on the population’s observed sensitivity to the nesting beach climate and one part was based on its sensitivity to the ocean climate,” said the study’s lead author Dr. Vincent Saba, a research fishery biologist with the NOAA National Marine Fisheries Service Northeast Fisheries Science Center, former researcher and current collaborator at Princeton University, and a Drexel University alumnus.

Leatherback turtle births naturally ebb and flow from year to year in response to climate variations, with more hatchlings, and rare pulses of male hatchlings, entering the eastern Pacific Ocean in cooler, rainier years. Female turtles are more likely to return to nesting beaches in Costa Rica to lay eggs in years when they have more jellyfish to eat, and jellyfish in the eastern Pacific are likely more abundant during cooler seasons. Turtle eggs and hatchlings are also more likely to survive in these cooler, rainier seasons associated with the La Niña climate phase, as this research team recently reported in the journal PLoS ONE. In addition, temperature inside the nest affects turtles’ sex ratio, with most male hatchlings emerging during cooler, rainier seasons to join the predominantly-female turtle population.

The researchers applied Saba’s combined model of these population dynamics to seven climate model projections assessed by the Intergovernmental Panel on Climate Change (IPCC). The climate model projections were chosen based on their ability to model El Niño Southern Oscillation (ENSO) patterns on the temperature and precipitation in the region of Costa Rica where this team has conducted long-term leatherback studies.

Hot Beaches, More Warm Years Threaten Turtles’ Recovery The resulting projections indicate that warmer, drier years will become increasingly frequent in Central America throughout this century. High egg and hatchling mortality associated with warmer, drier beach conditions was the most significant cause of the projected climate-related population decline: This nesting population of leatherbacks could decline by 7 percent per decade, or 75 percent overall by the year 2100.

The population is already critically low.

“In 1990, there were 1,500 turtles nesting on the Playa Grande beach,” said Dr. James Spotila, the Betz Chair Professor of Environmental Science in the College of Arts and Sciences at Drexel. “Now, there are 30 to 40 nesting females per season.”

Spotila, a co-author of the study, has been studying leatherback turtles at Playa Grande in Costa Rica, the largest leatherback nesting beach in the eastern Pacific, with colleagues and Drexel students, for 22 years.

Poaching of turtle eggs was a major cause of the initial decline, and was once such a widespread problem that virtually no turtle hatchlings would survive at Playa Grande. Spotila and colleagues worked with the local authorities in Costa Rica to protect the leatherbacks’ nesting beaches so that turtle nests can hatch in safety. Bycatch of juvenile and adult turtles in fishing operations in the eastern Pacific remains a threat.

For the population to recover successfully, Spotila said, “the challenge is to produce as many good hatchlings as possible. That requires us to be hands-on and manipulate the beach to make sure that happens.”

Spotila’s research team is already investigating methods such as watering and shading turtle nests that could mitigate the impact of hot, dry beach conditions on hatching success.