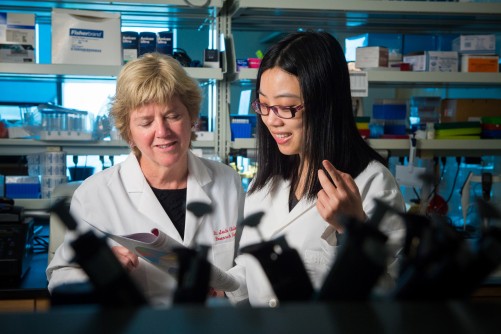 Asparaginase is an important agent used to treat ALL, but is also a major cause of acute pancreatitis in ALL patients. The painful and sometimes life-threatening condition occurs in 2 to 18 percent of the patients, complicating their treatment and threatening their chances of being cured. If the association between a rare variation in the CPA2 gene and asparaginase-related pancreatitis is confirmed, the results could help identify patients who are candidates for chemotherapeutic regimes that do not include the drug.

“In this study we identified several independent risk factors for asparaginase-induced pancreatitis and also gained insight into the mechanism responsible for this serious treatment complication,” said corresponding author Mary Relling, Pharm.D., chair of the St. Jude Department of Pharmaceutical Sciences. “Understanding the risk factors for acute pancreatitis is important because in patients who can tolerate the drug, asparaginase reduces the likelihood that ALL patients will relapse.”

The study confirmed previous reports that older age as well as higher doses and longer duration of asparaginase therapy were associated with a greater risk of pancreatitis. Researchers found that the risk in ALL patients was higher in teenagers than in young children.

The research included 5,398 ALL patients ranging from infants to young adults who were treated in clinical trials organized by St. Jude or the Children’s Oncology Group, a federally funded pediatric cancer clinical trials network. The study included 188 patients who developed pancreatitis at least once during ALL therapy. The project was the largest yet to identify risk factors for asparaginase-related pancreatitis in ALL patients.

The search for risk factors involved checking patient DNA for more than 920,000 gene variants. Researchers also sequenced 283 genes, including genes associated with ALL risk and treatment outcome plus genes linked to an elevated risk of pancreatitis in patients with different health problems.

Two study participants each carried one copy of a CPA2 variant that yield a truncated version of the pancreatic enzyme proCPA2. Both patients developed severe pancreatitis within weeks of receiving their first dose of asparaginase. “That suggests patients with this rare variant cannot tolerate the drug long enough to benefit from treatment. For these patients, ALL treatment regimens that do not depend on asparaginase may be preferable,” Relling said. Researchers estimated about 9 in 100,000 individuals carry the suspected high-risk CPA2 variant.

Other more commonly occurring gene variants identified in this study provided insights into the mechanisms underlying asparaginase-associated pancreatitis. The variants were more modestly associated with pancreatitis in this study. The variations included genes involved in purine metabolism and the cytoskeleton, which helps cells maintain their shape.