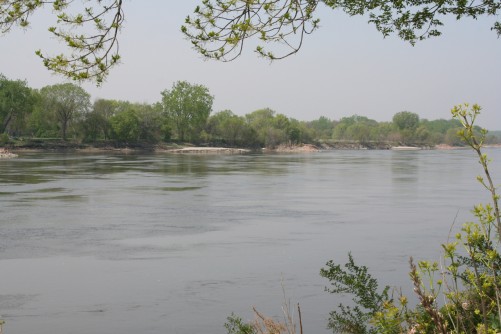 Scientists say the Missouri River, shown here near Sioux City, Iowa, needs a flow of sediment as well as water to stay healthy.

Newswise — The Missouri River needs a flow of sediment, not just water, to stay healthy, and regulatory agencies and scientists need to do a better job of gathering and understanding information about that process.

A South Dakota State University river ecologist who served on a national panel on Missouri River sediment issues that recently released its findings said that was one important consensus of the group. The panel’s report in late September 2010 offered expert advice that can help agencies such as the U.S. Army Corps of Engineers, in particular, to better manage the Missouri River. The study also takes into account the historic role the Missouri has played in supplying sediment to maintain coastal wetlands along the Gulf Coast in Louisiana.

SDSU Distinguished Professor W. Carter Johnson said the problem is that the 20th century dams built along the Missouri River in South Dakota, North Dakota and Montana were designed to manage water, not sediment.

“The Missouri River was a turbid river. It had a lot of sediment in it. It was called ‘the Big Muddy,’” said Johnson, who was one of 13 scientists appointed to the National Research Council’s panel on Missouri River Recovery and Associated Sediment Management Issues. “Now, of course, it’s not that, it’s much clearer water. Sometimes the Environmental Protection Agency standards for how much sediment should be allowed in the river don’t match what the historic river was like.”

The panel recommended that water quality criteria for the Missouri River should take into consideration the historical sediment conditions in the river.

The study also tried to evaluate management practices to protect two native bird species, the piping plover and the least tern, and a native fish species, the pallid sturgeon. All are listed under the Federal Endangered Species Act. Recovery practices to help those species include building artificial islands as nesting sites for the birds or adding sediment to the river to create turbid conditions favorable for the pallid sturgeon.

Importantly, the report concluded that although the Corps’ projects adding sediment to the river also increase the amount of nutrients such as phosphorus from fertilizer reaching the Gulf of Mexico, such practices do not significantly change the size of the Gulf’s “dead zone” — an area of hypoxia that results when nutrients spur algae blooms that in turn deplete oxygen as the algae die and decay.

In the states that have Missouri River dams, Johnson said, one key issue is the formation of deltas, especially where the Missouri River or tributary streams enter the reservoirs. The accumulation of silts is making water shallower in those locations, more like a marsh than a lake, Johnson said, so that some recreational benefits are lost and human infrastructure is flooded.

Another important issue in those states is that there is too little sediment in some areas downstream from the dams, so the relatively clear water flowing out of the reservoirs, having dropped its load of sediment above the dams, tries to find new sediment by scouring the channels deeper below the dams.

“Rivers come to some equilibrium in the amount of sediment that they carry. A river scavenges what it needs in order to be in balance,” Johnson explained. “If it has a surplus, it will deposit that, and if it has a shortage, it will gain that from the bed or from the banks.”

One of the panel’s recommendations is that agencies such as the Corps of Engineers and the U.S. Geological Survey collaborate on a “sediment budget” that looks at how much and where sediment is eroded, transported, and deposited in the Missouri River system. Johnson is a nationally recognized river ecologist who served previously on three similar panels for the NRC’S umbrella organization, the National Academy of Sciences, dealing with the Missouri River ecosystem, endangered and threatened species of the Platte River, and managing the Columbia River for wild salmon.

Below is a link to the Missouri River panel’s report and briefings on sediment issues: http://www.nationalacademies.org/morenews/20100928b.html

The National Academies Press will be making the final report available soon as a 182-page book co-authored by Johnson and his colleagues on the panel.