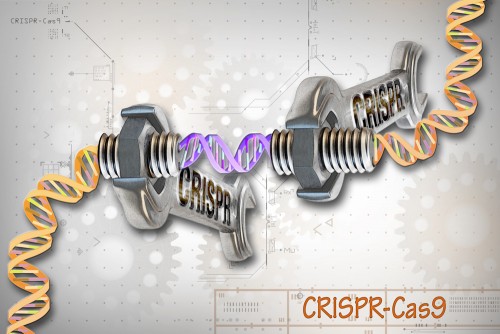 The conventional CRISPR-Cas9 system comprises two parts: the Cas9 enzyme, which acts like a wrench, and specific RNA guides (CRISPRs), which act as different socket heads. These RNAs guide the Cas9 protein to the target gene on a DNA strand. This technique allows researchers to study genes in a specific, targeted way.

Newswise — In just the past few years, researchers have found a way to use a naturally occurring bacterial system known as CRISPR/Cas9 to inactivate or correct specific genes in any organism. CRISPR/Cas9 gene editing activity runs continuously, though, leading to risk of additional editing at unwanted sites. Now, researchers at University of California, San Diego School of Medicine, Ludwig Cancer Research and Isis Pharmaceuticals demonstrate a commercially feasible way to use RNA to turn the CRISPR-Cas9 system on and off as desired — permanently editing a gene, but only temporarily activating CRISPR-Cas9. The study is published November 16 by Proceedings of the National Academy of Sciences.

CRISPR/Cas9 works like this: researchers design a “guide” RNA to match the sequence of a specific target gene. The RNA guides the Cas9 enzyme to the desired spot, where it cuts the DNA. The cell can repair the DNA break, but it does so imprecisely, thereby inactivating the gene. Alternatively, researchers can coax the cell into replacing the section adjacent to the cut with a healthier version of the gene. Researchers are now testing the CRISPR/Cas9 system in a variety of applications to repair defective genes that cause disease.

The new approach introduces chemically modified, RNA-based drugs to transiently activate the CRISPR/Cas9 gene editing system. An initial, specially modified RNA is used to replace the usual guide RNA. This RNA directs Cas9’s DNA-cutting activity to a selected target gene and the editing process proceeds. Activity is transient, however, as the editing stops when the guiding RNA drug is cleared. An extension of the approach can switch off the molecular scissors even faster by addition of a second, chemically modified RNA drug that directs inactivation of the gene encoding the Cas9 enzyme.

“The RNA-based drugs we developed in this study provide many advantages over the current CRISPR/Cas9 system, such as increased editing efficiency and potential selectivity,” said Cleveland. “In addition, they can be synthesized efficiently, on an industrial scale and in a commercially feasible manner today.”

“Today’s published work is another demonstration of the successful synergy between Dr. Cleveland’s lab and my team at Isis Pharmaceuticals,” said C. Frank Bennet, PhD, co-senior author of the study and senior vice president of research at Isis Pharmaceuticals. “Leveraging Isis’ expertise in developing RNA-targeted compounds, together the team has demonstrated that we can develop molecules that enhance the effectiveness of the CRISPR mechanism.”

Proceedings of the National Academy of Sciences; National Institutes of Health