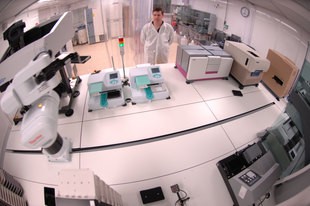 Dan Dry for the University of Chicago

Study-director Kevin White, PhD, professor of human genetics, and ecology and evolution, and director of the Institute for Genetics and Systems Biology at the University of Chicago

Newswise — Large-scale data mining of gene networks in fruit flies has led researchers to a sensitive and specific diagnostic biomarker for human renal cell carcinoma, the most common type of kidney cancer. In the journal Science, published early online January 22, a team based at the University of Chicago shows that the biomarker known as SPOP is produced by 99 percent of clear cell renal cell carcinomas but not by normal kidney tissue.

Physicians could use SPOP levels to confirm or rule out a diagnosis of renal cell carcinoma (RCC). It could also help them determine the original source of cancers that had spread to other organs from an unknown primary tumor.

"This could serve as a diagnostic tool, lead us to new drug targets and potentially help us detect kidney cancers sooner," said study-director Kevin White, PhD, professor of human genetics, and ecology and evolution, and director of the Institute for Genetics and Systems Biology at the University of Chicago. "It also confirms our strategy of using genomics and systems-level analysis of model organisms such as fruit flies to identify factors that play crucial roles in human disease."

The study began with the fly genome. White and colleagues, who study gene regulation—how genes or entire networks of genes get turned on of off—wanted to measure the downstream effects of two key genes, known as Eve and Ftz, that control early steps in the development of flies, beginning just after the eggs are laid.

Because Eve and Ftz regulate the activity of other genes, and many of those genes control the activity of additional genes, both had a large impact. Eve influences the expression of 1,074 different genes and Ftx impacts 1,310 genes.

When they narrowed their search to genes directly impacted, the total fell to 235 genes. About 20 percent of those target genes regulate transcription, the activation of other genes, and 40 percent controlled developmental processes.

About 150 of those target genes have human equivalents. When the researchers ranked those 150 genes according to their impact in flies, the top candidate was a gene known as CG9924, or Roadkill, the central player in a major hub of networked genes and a crucial component in the development of the nervous system. SPOP, the human equivalent, is about 80 percent identical to Roadkill.

Looking closer, they determined that SPOP appeared to play a role not just in development but also in human cancers. It interacts with cell signaling pathways—JNK and RAS—that frequently go awry in multiple human cancers.

At this point, the researchers shifted their focus from fly genetics to human cancer. When they screened hundreds of tissue samples from 18 different tumor types, acquired from patients having surgery, they found that 85 percent of renal cell carcinomas produced high amounts of SPOP, while normal kidney tissue was uniformly negative.

When they looked at 300 renal cell cancer samples, 77 percent were positive for SPOP. All normal kidney samples were negative.

About 75 percent of all renal cell cancers are clear cell RCC. The researchers found that 99 percent of the clear cell RCC samples showed evidence of elevated SPOP. The SPOP test even revealed that a few tumors had originally been misdiagnosed as clear cell RCC. Those turned out to be other types of kidney cancer when examined more closely by pathologists.

"These results indicate that SPOP is a highly sensitive and specific diagnostic biomarker for clear cell RCC," the authors conclude, "and can help distinguish histological subtypes of RCC."