Roadmap to Guide Progress Toward Replacing Animal Use in Toxicity Testing 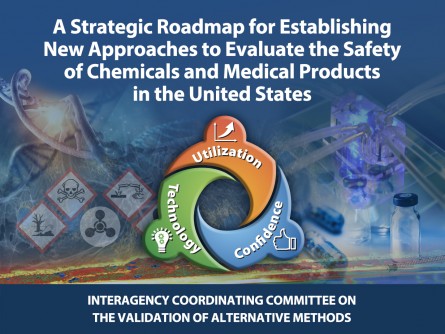 The strategic roadmap from the Interagency Coordinating Committee on the Validation of Alternative Methods offers a new framework for the safety testing of drugs and chemicals.

Roadmap to guide progress toward replacing animal use in toxicity testing

Newswise — Sixteen federal agencies partnered to develop a strategic roadmap that offers a new framework for the safety testing of drugs and chemicals, which aims to provide more human relevant toxicology data while reducing the use of animals. The roadmap was published Jan. 30 by the National Toxicology Program (NTP), a federal interagency program headquartered at the National Institute of Environmental Health Sciences (NIEHS) in North Carolina. NIEHS is part of the National Institutes of Health.

The report, A Strategic Roadmap for Establishing New Approaches to Evaluate the Safety of Chemicals and Medical Products in the United States, was developed by the Interagency Coordinating Committee on the Validation of Alternative Methods (ICCVAM). ICCVAM facilitates the development of toxicological testing methods that replace, reduce, or refine the use of animals. The committee includes representatives from U.S. federal agencies that use, generate, or disseminate toxicological and safety testing information.

“This roadmap represents a coordinated effort by federal government agencies to proactively develop and adopt new approaches to toxicity testing, rather than having changes driven by external influences,” said Warren Casey, Ph.D., director of the NTP Interagency Center for the Evaluation of Alternative Toxicological Methods. “If actionable progress in this area is going to happen, the agencies need to take the lead, and that is exactly what they are doing with this roadmap.”

The roadmap was developed to guide the application of new technologies, such as high-throughput screening, tissue chips, and computational models, to toxicity testing of chemicals and medical products.

Objectives described in the roadmap identify activities that should be undertaken by regulatory agencies, test method developers, regulated industries, funding agencies, and other stakeholders to achieve these goals.

Activities are underway to address the roadmap goals. Presentations at the September 2017 Scientific Advisory Committee on Alternative Toxicological Methods meeting described implementation of the roadmap for skin sensitization and acute systemic toxicity testing. Reviews of U.S. agency information requirements and decision contexts for these areas, as well as for skin and eye irritation, are being prepared for publication later this year.

To continue this process, ICCVAM is sponsoring a session on the roadmap at the Society of Toxicology meeting in March, and several other scientific meetings in the spring.

About the National Toxicology Program (NTP): NTP is a federal, interagency program headquartered at NIEHS, whose goal is to safeguard the public by identifying substances in the environment that may affect human health. For more information about NTP and its programs, visit ntp.niehs.nih.gov.

About the National Institute of Environmental Health Sciences (NIEHS): NIEHS supports research to understand the effects of the environment on human health and is part of NIH. For more information on environmental health topics, visit www.niehs.nih.gov. Subscribe to one or more of the NIEHS news lists (www.niehs.nih.gov/news/newsroom/newslist/index.cfm) to stay current on NIEHS news, press releases, grant opportunities, training, events, and publications.

National Institute Of Environmental Health Sciences National Toxicology Program Interagency Coordinating Committee on the Validation of Alternative Methods (ICCVAM) A Strategic Roadmap for Establishing New Approaches to Evaluate the Safety of Chemicals and Medical Products in the United States Framework for the safety testing of drugs and chemicals Report
COMMENTS | COMMENTING POLICY
close
0.21956