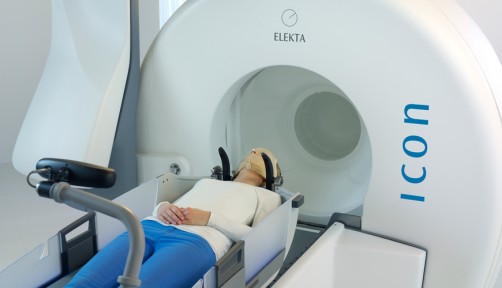 Treatments using the new Icon System are available at the hospital's New Brunswick campus and can now be planned and guided by a frameless approach, when appropriate. The frameless mask solution is one of several new features of Icon and is integrated with a high-definition motion management system.

Nearly 78,000 new cases of primary brain tumors (including cancerous and non-cancerous tumors) were diagnosed in 2015, and today nearly 700,000 people in the U.S. alone are living with primary brain and CNS tumors including malignant tumors, benign tumors, functional disorders (such as essential tremor and severe facial pain (trigeminal neuralgia) vascular disorders and ocular disorders.

Primary and metastatic brain tumors are challenging to treat. While surgery is an effective option, great care must be taken to minimize damage to normal surrounding brain tissue, and patients are at risk for surgical complications such as infection, post-surgical bleeding, and complications due to anesthesia. Traditional radiation therapy delivered to the brain may cause damage to healthy tissue within the brain and other parts of the body, leading to side effects such as hair loss, skin problems, neurocognitive decline and fatigue. Stereotactic radiosurgery (SRS) is a non-invasive treatment that focuses multiple beams of radiation to specific areas within the brain, destroying diseased tissue with precision while minimizing damage to surrounding healthy tissue. The procedure typically involves a single, outpatient session of radiation.

“As a major academic medical center, we are proud to make the latest generation of this technology available to our patients,” explains Kimyatta Washington, MHSA, Assistant Vice President of Oncology Services for RWJUH. “Adoption of this latest advance in SRS technology is consistent with our mission to offer our patients the highest level of care for neurological disorders. Adding Gamma Knife Icon to our multi-disciplinary approach to treating brain cancer and complex neurological disorders in partnership with Rutgers Cancer Institute of New Jersey and Rutgers Robert Wood Johnson Medical School and our other highly advanced cancer treatment centers within RWJBarnabas Health System, will allow us to offer the benefits of cranial SRS to a broader population of patients with brain disease, and to provide these patients with the most precise targeting technology available.”

As the flagship Cancer Hospital of Rutgers Cancer Institute of New Jersey and the principal teaching hospital of Rutgers Robert Wood Johnson Medical School in New Brunswick, RWJUH is an innovative leader in advancing state-of-the-art care. A Level 1 Trauma Center and the first Pediatric Trauma Center in the state, RWJUH’s New Brunswick campus serves as a national resource in its ground-breaking approaches to emergency preparedness.

Both the New Brunswick and Somerset campuses have earned significant national recognition for clinical quality and patient safety, including the prestigious Magnet® Award for Nursing Excellence and “Most Wired” designation by Hospitals and Health Networks Magazine. The Joint Commission and the New Jersey Department of Health and Senior Services have designated the New Brunswick Campus as a Comprehensive Stroke Center and the Somerset Campus as a Primary Stroke Center.