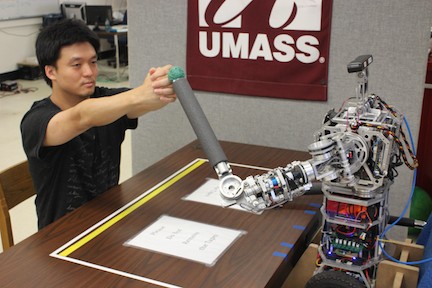 Regarding the overall outcome, speech language pathologist and study leader Yu-kyong Choe says, “It’s clear from our study of a 72-year-old male stroke client that a personal humanoid robot can help people recover by delivering therapy such as word-retrieval games and arm movement tasks in an enjoyable and engaging way.”

A major focus of this case study was to assess how therapy interventions in one domain, speech, affected interventions in another, physical therapy, in two different delivery scenarios. Despite the importance of working with other professionals, the authors point out, until now it has been “largely unknown how interventions by one type of therapy affects progress in others.”

Over the course of the experiment, the client made “notable gains in the frequency and range of the upper-limb movements,” the authors say. He also made positive gains in verbal expression. Interestingly, his improvements in speech and physical function were much greater when he engaged in only one therapy than when the two therapies were paired in sessions immediately following each other. The authors summarize that in such a sequential schedule “speech and physical functions seemed to compete for limited resources” in the brain. Their work is described in the current issue of the journal Aphasiology.

Choe and computer science researcher and robot expert Rod Grupen, director of the Laboratory for Perceptual Robotics at UMass Amherst, are in the second year of a $109,251 grant from the American Heart Association to investigate the effect of stroke rehabilitation delivered by a humanoid robot, uBot-5. It is a child-sized unit with arms and a computer screen through which therapists interact with the client.

Choe, Grupen and colleagues are seeking ways to bring more and longer-term therapy and social contact to people recovering from stroke. It’s estimated that 3 million Americans daily experience the debilitating effects of stroke. But even after years, they can recover significant function with intensive rehabilitation, says Choe. The bad news is that this is rarely available or accessible due to a shortage of therapists and lack of coverage for long-term treatment. Many people are left with chronic low function, which can lead to social isolation and depression. While some may object to robots delivering therapy, the need is great and definitely not being met now, especially in rural areas, Grupen and Choe point out. They hope to aid human-to-human interaction, so a robot can temporarily take the therapist’s place. Grupen says, “In addition to improving quality of life, if we can support a client in the home so they can delay institutionalization, we can improve outcomes and make a huge impact on the cost of elder care. There are 70 million baby boomers beginning to retire now.”

“Stroke rehabilitation is such a monumental financial problem everywhere in the world, that’s where it can pay for itself,” he adds. “A personal robot could save billions of dollars in elder care while letting people stay in their own homes and communities. We’re hoping for a win-win where our elders live better, more independent and productive lives and our overtaxed healthcare resources are used more effectively.”

Choe and Grupen’s study is ongoing and they continue to enroll participants who are recovering from stroke. To learn more, contact Choe at 413/545-4297 or [email protected]