Columbia Engineers use a robotic training method that improved posture and walking in children with CP by enhancing muscle strength and coordination.

Video showing before and after results of robot-driven TPAD training method that improves crouch gait in children with cerebral palsy. 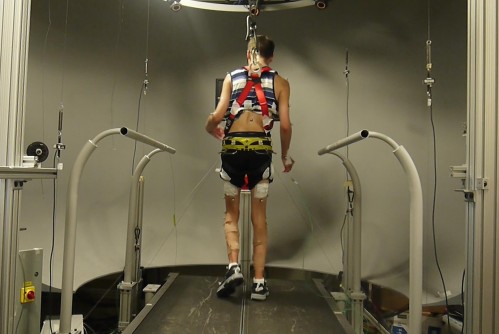 Columbia Engineers use a robotic training method that improved posture and walking in children with CP by enhancing muscle strength and coordination.

Newswise —  New York, NY—July 26, 2017—In the U.S., 3.6 out of 1000 school-aged children are diagnosed with cerebral palsy (CP). Their symptoms include abnormal gait patterns which results in joint degeneration over time. Slow walking speed, reduced range of motion of the joints, small step length, large body sway, and absence of a heel strike are other difficulties that children with CP experience. A subset of these children exhibit crouch gait which is characterized by excessive flexion of the hips, knees, or ankles.

Today, a team led by Sunil Agrawal, professor of mechanical engineering and of rehabilitation and regenerative medicine at Columbia Engineering, has published a pilot study in Science Robotics that demonstrates a robotic training method that improves posture and walking in children with crouch gait by enhancing their muscle strength and coordination. VIDEOS: https://youtu.be/AMRTfLTNV1M and https://youtu.be/ZMPVlGwvkUM

Crouch gait is caused by a combination of weak extensor muscles that do not produce adequate muscle forces to keep posture upright, coupled with tight flexor muscles that limit the joint range of motion. Among the extensor muscles, the soleus, a muscle that runs from just below the knee to the heel, plays an important role in preventing knee collapse during the middle of the stance phase when the foot is on the ground. Critical to standing and walking, the soleus muscle keeps the shank upright during the mid-stance phase of the gait to facilitate extension of the knee. It also provides propulsive forces on the body during the late stance phase of the gait cycle.

“One of the major reasons for crouch gait is weakness in soleus muscles,” says Agrawal, who is also a member of the Data Science Institute. “We hypothesized that walking with a downward pelvic pull would strengthen extensor muscles, especially the soleus, against the applied downward pull and would improve muscle coordination during walking. We took an approach opposite to conventional therapy with these children: instead of partial body weight suspension during treadmill walking, we trained participants to walk with a force augmentation.”

The research group knew that the soleus, the major weight-bearing muscle during single stance support, is activated more strongly among the lower leg muscles when more weight is added to the human body during gait. They reasoned that strengthening the soleus might help children with crouch gait to stand and walk more easily.

To test their hypothesis, the team used a robotic system—Tethered Pelvic Assist Device (TPAD)—invented in Agrawal’s Robotics and Rehabilitation (ROAR) Laboratory. The TPAD is a wearable, lightweight cable-driven robot that can be programmed to provide forces on the pelvis in a desired direction as a subject walks on a treadmill. The researchers worked with six children diagnosed with CP and exhibiting crouch gait for fifteen 16-minute training sessions over a duration of six weeks. While the children walked on treadmills, they wore the TPAD as a lightweight pelvic belt to which several wires were attached. The tension in each TPAD wire was controlled in real time by a motor placed on a stationary frame around the treadmill, based on real-time motion capture data from cameras. The researchers programmed the TPAD to apply an additional downward force through the center of the pelvis to intensively retrain the activity of the soleus muscles. They used a downward force equivalent to 10 percent of body weight, based on the results of healthy children carrying backpacks.  This was the minimum weight needed to show notable changes in posture or gait during walking.

The team examined the children’s muscle strength and coordination using electromyography data from the first and last sessions of training and also monitored kinematics and ground reaction forces continuously throughout the training. They found that their training was effective; it both enhanced the children’s upright posture and improved their muscle coordination. In addition, their walking features, including step length, range of motion of the lower limb angles, toe clearance, and heel-to-toe pattern, improved.

“Currently, there is no well-established physical therapy or strengthening exercise for the treatment of crouch gait,” Agrawal notes.

Heakyung Kim, A. David Gurewitsch Professor of Rehabilitation and Regenerative Medicine and Professor of Pediatrics at the Columbia University Medical Center, who treats these patients, added “Feedback from the parents and children involved in this study was consistent. They reported improved posture, stronger legs, and faster walking speed, and our measurements bear that out. We think that our robotic TPAD training with downward pelvic pull could be a very promising intervention for these children.”

The researchers are planning more clinical trials, to test a larger group and changing more variables. They are also considering studying children with hemiplegic/quadriplegic CP.

The study is titled, “Robot-driven downward pelvic pull to improve crouch gait in children with cerebral palsy.” The other contributors are D. Martelli (Columbia Engineering); V. Vashista (Indian Institute of Technology Gandhinagar); and I. Martinez-Hernandez (department of rehabilitation and regenerative medicine, Columbia University.

The authors declare they have no competing financial interests.

Caption: Video showing before and after results of robot-driven TPAD training method that improves crouch gait in children with cerebral palsy.