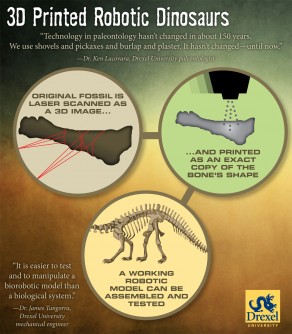 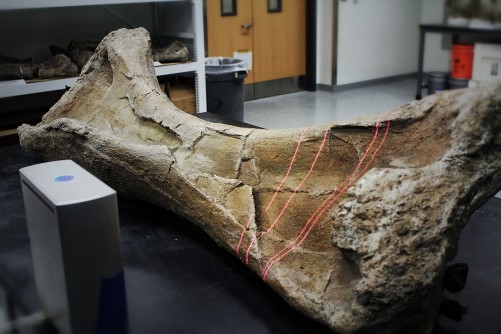 Creating a 3-D scan of the humerus bone from a Paralititan, one of the largest sauropod dinosaurs ever found.

Newswise — PHILADELPHIA (February 20, 2012)— Researchers at Drexel University are bringing the latest technological advancements in 3-D printing to the study of ancient life. Using scale models of real fossils, for the first time, they will be able to test hypotheses about how dinosaurs and other prehistoric animals moved and lived in their environments.

“Technology in paleontology hasn't changed in about 150 years,” said Drexel paleontologist Dr. Kenneth Lacovara, an associate professor in the College of Arts and Sciences. “We use shovels and pickaxes and burlap and plaster. It hasn't changed -- until right now.”

3-D Printing Technology in PaleontologyLacovara has begun creating 3-D scans of giant dinosaur bones and other fossils in his lab. The 3-D scan puts a virtual image in a digital workspace that researchers can manipulate and analyze. To bring these scans to life, Lacovara is also teaming up with mechanical engineer Dr. James Tangorra, an assistant professor in Drexel’s College of Engineering, to use 3-D printing technology to create and test scale models of fossil bones.

A 3-D printer is a technology for rapid prototyping and manufacturing objects based on a digital design. Common models work by repeatedly extruding extremely thin layers of a resin or other material, building up strata to create a physical object.

“It’s kind of like Star Trek technology, where you can press a button and the object pops out,” Lacovara said. A six-inch model of a dinosaur bone can be printed in a few hours using current technology.

This biologically-derived modeling to test possible movements of extinct species is the major focus of Lacovara and Tangorra’s collaboration.Robotic Models to Test Mechanics of Dinosaur Movement

“We don’t know a lot about the way dinosaurs move,” Lacovara said. “How did they stand? How did they ambulate? Did they run or trot? How did they reproduce? It’s all a bit mysterious,” especially when it comes to the largest dinosaurs. Paleontologists’ current methods of understanding such mechanics rely heavily on guesswork and common sense about what types of movements seem possible. With new technology, researchers can begin testing their predictions for the first time.

Lacovara has been part of scientific teams unearthing some of the largest known giant sauropod dinosaur specimens, including the new species Paralititan stromeri found in Egypt in 2000, which is the second-most-massive known dinosaur species and a new giant from Patagonia. Such giant sauropod dinosaurs could reach weights of 60 to 80 tons, which is 12 to 14 times heavier than a large modern elephant.

When working with enormous dinosaur fossils, Lacovara said, it’s simply physically impossible to manipulate the bones to test theories about mechanics and movement. That’s why scaled-down replicas that preserve the exact shape and proportion of the bones can help. Researchers can also digitally reshape the models to correct for changes that may have occurred over millions of years of fossilization and compression.

Lacovara and Tangorra will work together to create robotic models of giant sauropod dinosaurs, attaching artificial muscles and tendons to perform comprehensive tests of how the animal’s body could have handled physical stresses of the environment. This work is similar to Tangorra’s ongoing work modeling and manufacturing robotic fish. “We extract features from biological species and create software-based or robotic testing systems. It’s easier to test a biorobotic model than a biological system,” Tangorra said. This work relies on studies of the fish’s movements, biomechanics and fluid mechanics to ensure that the robot reflects the biological system. Tangorra noted that because the dinosaur species they are modeling are extinct, any robotic reconstructions will be more speculative.

“A Virtual Zoo of Cretaceous New Jersey”In addition to constructing models of giant dinosaurs, the researchers will make 3-D models of some fossils found closer to home. A fossil dig site in Gloucester County, N.J., has yielded a large number of marine animal fossils from the Cretaceous period, 65 million years ago. Lacovara and his students and collaborators from other institutions continue to excavate the site. Now they will begin producing 3-D models of the turtles, crocodilians, fish and other animals found at that site, for what Lacovara called “a virtual zoo of Cretaceous New Jersey.” A sample of their first reconstruction, of an ancient New Jersey crocodile, can be seen here: http://www.drexel.edu/now/features/archive/2011/November/Evan-Boucher-Dream-Job/

See A Giant Dinosaur Bone and its 3-D Model in PhiladelphiaA cast of the giant, 5.5-foot-long humerus bone of the Paralititan dinosaur is on display alongside a 1/10 scale 3-D printed model at the Franklin Institute as part of the Giant Mysterious Dinosaurs exhibit. The Franklin and the Academy of Natural Sciences of Drexel University are offering a “Giant Dinosaur Deal” combination ticket, available at the box offices of both museums through March 18, 2012. 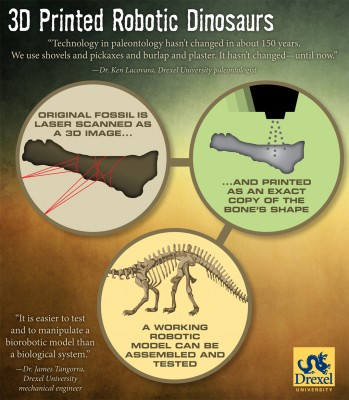 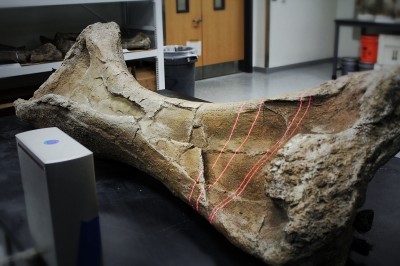 Caption: Creating a 3-D scan of the humerus bone from a Paralititan, one of the largest sauropod dinosaurs ever found.