The American College of Gastroenterology Invites the Public to “Tune It Up: A Concert To Raise Colorectal Cancer Awareness” Free Virtual Event Open to All on March 31, 2022 at 8:00 pm EDT 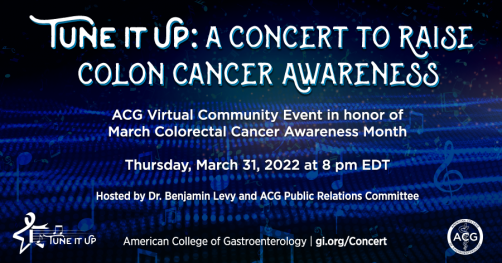 Newswise — Bethesda, MD (March 24, 2022) – The American College of Gastroenterology offers an open invitation to all to enjoy a free virtual event, “Tune It Up: A Concert To Raise Colorectal Cancer Awareness,” on Thursday, March 31, 2022 at 8 pm EDT featuring dynamic performances by a talented collective of musicians.

The virtual concert includes messages from celebrity cancer advocate Katie Couric and performances by notable stars such as Rufus Wainwright and Ben Folds, along with a group of musicians from a wide range of genres who all donated their time and performances to support colorectal cancer awareness efforts. ACG’s goal is to tap the connection and energy that music creates to shine a light on the importance of colorectal cancer screening and prevention.

Rock, Jazz, Hip-Hop, Broadway & Classical Performers Headline Virtual Concert
This free event is open to all for an evening of rock, jazz, hip-hop, Broadway, and classical music performed by acclaimed musicians. The concert includes performances and special video appearances, including introductions to several performances from Jamie Bernstein (author, narrator, filmmaker, and daughter of Leonard Bernstein) and actors from The Mandalorian and Mad Men.

“This virtual concert is an amazing way to build bridges within the gastroenterology community and beyond to connect in new and meaningful ways through music to bring attention to potentially lifesaving colorectal cancer screening. I am so proud of Dr. Levy and the ACG for envisioning such a creative and inspiring event to reach patients and the public, and to spread the message about the importance of colorectal screening at a time when we know that the pandemic has caused too many people to delay preventive care,” commented ACG President Samir A. Shah, MD, FACG.

Benjamin Levy, MD, is the “Tune It Up” Concert Director and has invited musical guests to celebrate Colorectal Cancer Awareness Month. “My goal was to create a concert with music celebrities and empowering health education messages,” he said. Dr. Levy, a cellist and gastroenterologist, says he is “always looking for ways to combine music and medicine.”

Thanks to Dr. Levy’s vision for this virtual concert experience, more than 30 artists have agreed to contribute performances to this program that will air by webstream from the College’s website at gi.org/concert.

Watch the Concert
Explore all the performers from a diverse range of musical genres and bookmark this link to access the webstream on Thursday, March 31, 2022 at 8:00 pm Eastern Daylight Time: gi.org/concert

About Concert Director Dr. Benjamin Levy
Benjamin Levy, MD, is a board-certified gastroenterologist at the University of Chicago. Previously, as Division Head of Gastroenterology at Mount Sinai Hospital, Dr. Levy founded a gastroenterology clinic for refugees resettling in Chicago. His clinical projects focus on health care disparities and the development of colorectal cancer screening campaigns. During the COVID-19 pandemic, Dr. Levy organized a virtual health education concert series, “Concerts & Cocktails,” which teamed up musicians with physicians and nurses on the front line, and gave a TEDx talk about preventive medicine.

About Colorectal Cancer Screening
In the United States, colorectal cancer is the third most common cancer, yet it is one of the most preventable types of cancer. It is highly treatable and is often curable when caught early. Even during COVID-19, colorectal cancer screening is essential and should not be delayed. Screening colonoscopy can find growths in the colon called polyps so they can be removed before they turn into colorectal cancer. During the pandemic, patients are urged to not put off needed health care, especially preventive tests. The most common symptom of early colon and rectal cancers is NO symptom, so it is important to get screened. No matter what your age, never ignore new or worrying bowel symptoms. ACG’s message for March Colorectal Cancer Awareness Month: You can prevent colorectal cancer. Don’t let COVID-19 stop you! Learn more at gi.org/ColonCancer. To find a gastroenterologist near you, visit gi.org/findagi.

About the American College of Gastroenterology
Founded in 1932, the American College of Gastroenterology (ACG) is an organization with an international membership of over 17,000 individuals from 86 countries. The College's vision is to be the preeminent professional organization that champions the prevention, diagnosis, and treatment of digestive disorders, serving as a beacon to guide the delivery of the highest quality, compassionate, and evidence-based patient care. The mission of the College is to enhance the ability of our members to provide world class care to patients with digestive disorders and advance the profession through excellence and innovation based upon the pillars of Patient Care, Education, Scientific Investigation, Advocacy and Practice Management. www.gi.org