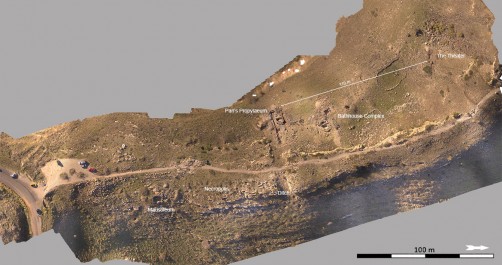 The Sussita saddle-ridge area which leads towards the city itself and the areas of excavation along it. 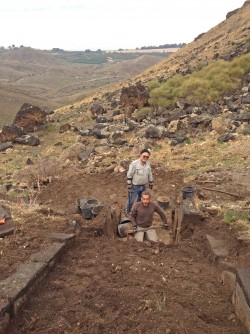 Dr. A. Iermolin (standing) and Dr. M. Eisenberg during the excavation of the first vaulted passage (vomitorium) 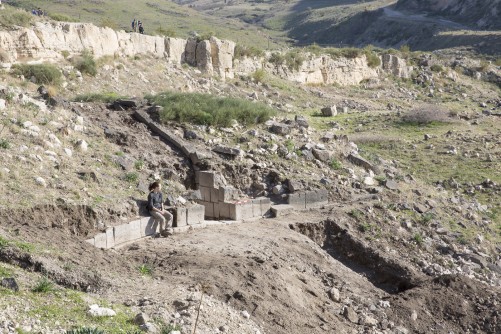 3. The results of the trial excavation at the theater: semicircular passage between the lower and upper seating arrangements (praencinctio) and entrance to a vaulted corridor (vomitorium)

Newswise — The University of Haifa's excavations at the Hippos (Sussita) site have uncovered the location of a large Roman theater. However, the theater's location outside the city walls supports the hypothesis that the facility was used mainly for religious ceremonies rather than shows for the masses. Dr. Michael Eisenberg of the University of Haifa, who heads the Hippos Excavations Project, revealed the new findings at the annual research conference of the Zinman Institute of Archeology at the university. "The excavations outside the city over the past few years are falling into place like in a detective story," he remarks. "First we found the mask of Pan, then the monumental gate leading to what we began to assume was a large public compound - a sanctuary. And now, this year, we find a public bathhouse and theater in the same location, both facilities that in the Roman period could be associated with the god of medicine Asclepius or with gods of nature such as Dionysus and Pan."Hippos overlooks the Sea of Galilee from a prominent hill some two kilometers east of the lake, and is situated within the area of Sussita National Park, operated by the Israel Nature and Parks Authority. In the Roman period, Hippos was an important city in the Golan and the area to the east of the Sea of Galilee. Over the past two years, researchers from the Institute of Archeology at the University of Haifa have repeatedly been amazed by the astonishing findings uncovered outside the city walls - not something that would usually be expected.

A feature that was missing in the excavated city until now was the theater - a public building capable of accommodating thousands of people that served as the venue for the most popular public shows. Dr. Eisenberg explains that no self-respecting Roman city in this period could allow itself to remain without a theater; yet until now, no such structure was uncovered. "From the moment our delegation began to uncover Hippos, we waited for the moment when we would find a theater in the city. It's simply unthinkable that any Roman polis could have existed without a theater. Some researchers suggested that the small odeon we uncovered might have served as a substitute for the theater, given the small size of the city, but we knew that this was not the case. Prof. Arthur Segal, who headed the Hippos project for many years and is a leading expert on the subject of theaters in the Roman East, insisted that there must be a theater in the city," Dr. Eisenberg recalls.

In the meantime, the researchers uncovered various intriguing findings outside the city over recent years. In 2015 they uncovered the unique bronze mask of the god Pan, and a year later they located a monumental gate on which the mask must have been placed. "Pan's gate" was chosen several days ago as one of the "Top 10 Biblical Archaeology Discoveries in 2016" by the Biblical Archaeology Review. These findings led them to assume that the gate formed the entrance to a large compound, perhaps a ritual site devoted to Pan or Dionysus, who were often worshipped together. "This year, like the pieces of a jigsaw puzzle falling into place, we have found the first buildings in this compound - the public bathhouse and the theater, both of which are associated with ritual," Dr. Eisenberg explains.

The researchers located the public bathhouse relatively easily, although they have only exposed a small part of its extensive and rich compound. Alexander Iermolin, the member of the delegation who found the famous Pan mask, noticed a basalt depression covered in a huge layer of debris and suggested that this could be the site of the theater. After excavating for several days, two findings were uncovered that prove almost beyond doubt that this is indeed the theater: A passageway limited by a semicircular wall built of basalt ashlars, that served as a divide between the lower and upper blocks of seats, and one of the vaulted corridors that crossed the seating area, allowing the audience to reach their blocks of seats (the vomitorium). A small excavation revealed the foundations of several rows of seats, though needless to say the seats themselves have long since vanished. The gate is dated to the early second century CE, and the probe excavation suggests that this is also the period when the theater itself was built.

As noted, what is even more exciting for the researchers than the discovery of the theater is the fact that they may have uncovered an expansive sanctuary outside the city walls. "Dionysus, the god of wine, is associated with change and the loss of identity, and accordingly with the masks used in the theater. From the earliest days of the theater in the Greek world, the buildings served for the worship of Dionysus. In both Greek and Roman sites, we find a bathhouse as part of the sanctuary associated with healing and with Asclepius, the god of medicine,' Dr. Eisenberg explains. "The monumental gate, which we almost completed excavating this year, probably bore the bronze mask of Pan that was found in one of the gate towers. All these findings suggest that this was a large sanctuary outside the city - something that completely changes what we knew about Hippos and the surrounding area until now. If our hypothesis is correct, it is quite possible that thousands of visitors to the theater came not to see the latest show in town, but to take part in rituals honoring one of the gods of the Greco-Roman pantheon. They watched and listened to the priests here until they entered a state of ecstasy and catharsis," he concludes.The excavations and discoveries at Hippos are possible thanks to a devoted team of archeologists and other participants who volunteer their time on Fridays, without any support from government sources, at one of the most important Classical Period sites in Israel. 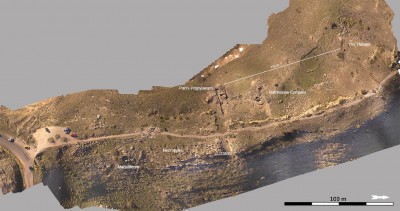 Caption: The Sussita saddle-ridge area which leads towards the city itself and the areas of excavation along it. 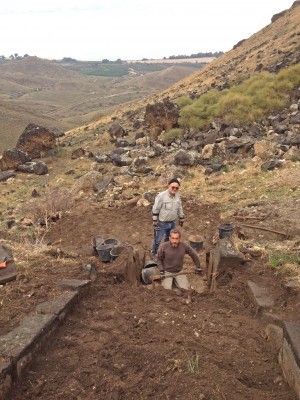 Caption: Dr. A. Iermolin (standing) and Dr. M. Eisenberg during the excavation of the first vaulted passage (vomitorium) 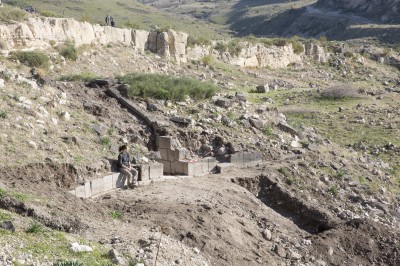 Caption: 3. The results of the trial excavation at the theater: semicircular passage between the lower and upper seating arrangements (praencinctio) and entrance to a vaulted corridor (vomitorium)