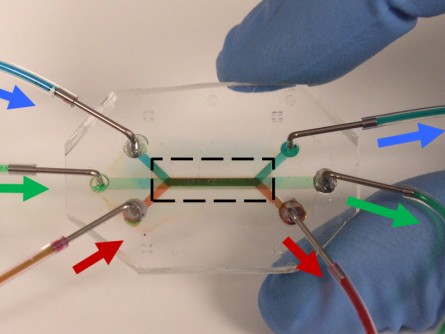 RTI’s lung-on-a-chip emulates the multilayer airway tissue microarchitecture. In this picture, dyes are flown in the three vertically stacked compartments separated by transparent membranes (shown by the dotted rectangle).

Newswise — RESEARCH TRIANGLE PARK, N.C. — Researchers at RTI International, in collaboration with the University of North Carolina at Chapel Hill, have developed a new lung-on-chip microdevice for laboratory studies of respiratory challenges and therapeutics. The microdevice includes multiple vertically stacked cellular layers that mimic the structure of the airway tissue.

The lung-on-a-chip model, funded by a contract from the Defense Threat Reduction Agency, was featured in an article published in "Lab on a Chip."

"The development of this microfluidic lung model, as well as other organs-on-chip, holds the promise of improving the physiological relevance of cellular models for more accurate prediction of the effects of toxicants and drugs on humans, and for reducing the use of animals in medical and pharmaceutical research," said Sonia Grego, Ph.D., research scientist at RTI and the project's principal investigator.

The cellular model of the airway mucosa could provide insight into biological and pathophysiological effects that conventional cell cultures or animal models do not capture, and help lead to the development of new therapeutics.

Researchers leveraged microfabrication and microfluidic techniques to achieve a system with three vertically stacked fluidic microcompartments separated by nanoporous membranes. Researchers demonstrated that the device was able to support viable cultures of sensitive and physiologically representative primary cells instead of using the more common immortalized cell lines. The engineered cell culture enabled interaction between three cell types of the airways and reproduced their physiological interfaces – becoming essentially an "organ-on-chip."

"The microfluidic cell cultures reproduced functions of the airway tissues such as mucus secretion and acted as a barrier to molecules," said Katelyn Sellgren, Ph.D., a postdoctoral research scientist at RTI and first author of the paper. "These properties are critical for inhalation toxicology and drug studies."

The conducting airways are involved in major diseases such as asthma and chronic obstructive lung diseases.

The research team included Scott H. Randell, Ph.D., a leading expert in the culture of primary lung cells, from the Cystic Fibrosis/Pulmonary Research and Treatment Center at the University of North Carolina at Chapel Hill.

"Our work demonstrated how a sophisticated investigation tool for the lung can be obtained," Grego said. "Next steps include studies ranging from exposure to environmental toxicants to pulmonary disease modeling and drug screening."