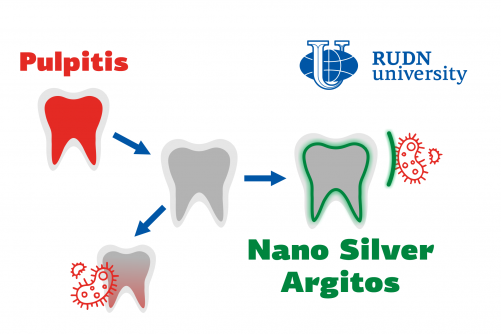 RUDN doctors have tested a new method therapy after the treatment of pulpitis. They used a solution with silver nanoparticles. It will potentially protect the tooth from harmful microorganisms longer. The results are published in Nanomaterials.

Newswise — Untreated cavities lead to a serious complication — inflammation of the tooth internal tissues -pulpitis. An important part of pulpitis treatment is to provide antimicrobial protection after a doctor's intervention. Usually, a solution of sodium hypochlorite is used for this, which helps in 40-75% of cases. In more complex situations, if for example the shape of the root canal is too complex, clinicians use other substances that do not last long. RUDN University dentists have tested a new drug based on nano silver.

The antibacterial properties of silver have been known for a long time. The goal of RUDN University doctors was to check if it is suitable for tooth after pulpitis treatment. For the study, the dentists applied ARGITOS, a colorless solution with silver nanoparticles that inhibits microorganisms. The researchers were able to show that silver forms a strong protective layer on the treated surface. Such treatment will protect the damaged tooth from dangerous bacteria for a long time.

Dentists of RUDN University conducted a study on 70 teeth. Half was treated with ethylenediaminetetraacetic acid (EDTA) solution, then all 70 teeth were treated with ARGITOS nano silver solution. EDTA destroyed the smear layer lining the dentin after instrumentation. To assess how deeply silver penetrates the root canal and how well it covers it, doctors used microcomputer tomography. 100% of the teeth with the preserved smear layer were covered with a strong protective layer of silver. For teeth treated with EDTA, the results were slightly lower - silver was revealed only in 73.5%.

“Successful endodontic treatment depends on the quality of mechanical and medical root canal treatment. This study was the first to evaluate the effectiveness of nano-silver solution as a final irrigant in penetrating the dentinal surfaces and creating a silver film in the inner wall of root canals. The preservation of the nano-silver film on the dentinal surfaces forms a barrier to the penetration of microorganisms. Nanosilver particles can have an antibacterial effect without staining the tooth tissue,” said Svetlana Razumova, MD, a Head of the Department of Propaedeutics of Dental Diseases at RUDN University.