4-Apr-2016 7:05 AM EDT, by University of Florida Institute of Food and Agricultural Sciences
favorite_border 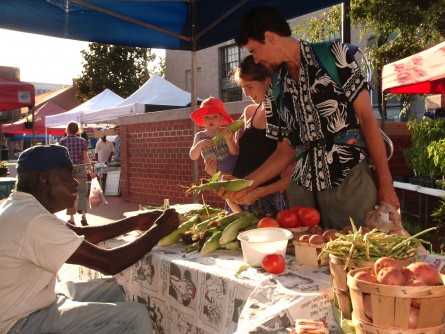 A newly published UF/IFAS study reveals rural residents go to farmers markets more than urban residents, and some see it as a day trip.

Newswise — GAINESVILLE, Fla. --- People who buy their produce from farmers markets love the freshness and nutritional value of the product. Not only that, rural residents seek out such markets more than urban residents, a University of Florida Institute of Food and Agricultural Sciences researcher says.

The latter finding surprised the researchers, led by Alan Hodges, an Extension scientist in the UF/IFAS food and resource economics department.

“We interpret this effect as due to greater awareness of farming and farm-fresh foods in rural areas,” Hodges said. “The finding also suggests that rural households may be seeking out farmers’ markets as a travel destination rather than as part of a multi-stop shopping trip, as would often be the case with urban consumers. In addition, there is greater competition among food retailers in urban areas, simply due to the larger number of venues available.”

If you establish farmers markets within about three miles of someone’s home, it will increase the chances urban residents will go to the market, but only by about 3.7 percent, the UF/IFAS study showed.

The findings are published in the journal Renewable Agriculture and Food Systems and come from the master’s thesis of former UF/IFAS graduate student Ruoding Shi, now a doctoral student at Virginia Tech.

Hodges and Shi surveyed 7,500 randomly selected households in Florida and obtained 1,599 valid responses from the primary food shopper in the residence. They asked consumers about shopping frequency and value of foods purchased through multiple local food distribution channels – in this case, farmers markets, U-pick operations and roadside stands.

Of those surveyed, 62 percent said they had bought locally grown foods at a farmers’ market, roadside stand or U-pick operation. Of those respondents, 90 percent rated freshness as very important; 78 percent mentioned food safety and 67 percent noted the produce’s nutrition as very important.

“The main takeaway from this study for local economic development is that consumer perceptions about local food attributes affect the likelihood of shopping at farmers’ markets,” Hodges said. “These favorable attributes, such as freshness and nutrition, can be emphasized by market managers to increase business volume. In addition, accessibility of farmers’ markets to consumers in terms of distance from home is just one factor among others that should be considered for locating markets.”