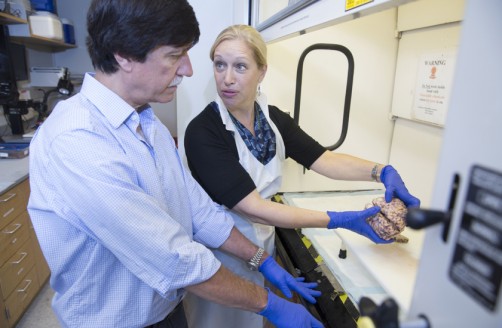 Newswise — (CHICAGO) – Dr. David Bennett has been awarded the 2018 Potamkin Prize for Research in Pick’s, Alzheimer’s and Related Diseases by the American Academy of Neurology and the American Brain Foundation.

Sometimes referred to as the Nobel Prize of Alzheimer’s research, the Potamkin Prize is an internationally recognized tribute in the field.

Bennett was chosen for the honor for his research on memory loss. He will receive the award, which includes a $100,000 prize, at the American Academy of Neurology’s 70th Annual Meeting in Los Angeles in April 2018.

For the past 25 years, Bennett and his team at the Rush Alzheimer’s Disease Center have enrolled nearly 3,500 older people into two ongoing studies – the Religious Orders Study, which examines memory loss in nuns and priests from across the United States, and the Rush Memory and Aging Project, which is a similar study of lay persons in northeastern Illinois.

Both studies are funded by the National Institutes of Health. Participants do not have dementia when enrolled, but some have developed it over time.

The studies annually collect clinical information and biospecimens (blood, etc.) from the participants, all of whom voluntarily donate their brain to research after their death. To date, more than 1,500 deceased participants have donated their brains, which are preserved at Rush.

By comparing the pathology of the brain samples of people who did and didn’t develop Alzheimer’s disease with the clinical data recorded during their lives, researchers have made a trove of new discoveries about how and why Alzheimer’s develops and progresses and why some people develop the disease's brain pathology but do not exhibit memory loss.

“We have measured many things in the brain that we can relate to memory loss over time prior to death and are now using this information to identify new approaches to the treatment and prevention of Alzheimer’s disease and several other causes of dementia,” Bennett said. “We are very interested in finding potential therapeutic targets and are looking closely at resilience — brain characteristics that allow one person’s brain to be more resilient to developing dementia than another person’s brain.”

In addition to drawing on the two studies for its own research, the Rush Alzheimer’s Disease Center shares the data and biospecimens from these studies with researchers around the world to advance the development of therapy to treat and prevent memory loss and dementia.

Alzheimer’s disease is the most common cause of dementia, a condition that degrades cognitive functions such as reasoning, memory and judgment. The disease affects about 5.4 million people in the United States, according to the Alzheimer’s Association, which estimates that Alzheimer’s and other dementias cost the U.S. $259 billion in 2017 and may cost as much as $1.1 trillion by 2050. A recently published paper by Bennett and his colleagues reported that Alzheimer’s contributes to more than 500,000 deaths annually, a rate comparable to heart disease and cancer.

The Potamkin Prize is made possible by the philanthropic contributions of the Potamkin family of New York, Philadelphia and Miami. The goal of the prize, awarded annually since 1988, is to help attract the best medical minds and most dedicated scientists in the world to the field of dementia research.

“Identifying better therapies for Alzheimer’s disease is among the most urgent public health priorities of this century,” said Bennett. “I am very honored to be receiving this award and am indebted to the Potamkin family for their generous support for this award. I thank the Potamkin committee for this honor. Finally, I am grateful to the study participants and families for their generous donation, and to the remarkable faculty and staff of the Rush Alzheimer’s Disease Center."