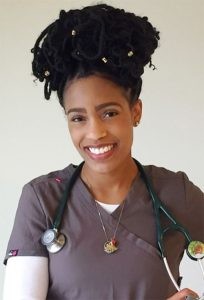 Newswise — Edgewater Park resident Laura Tolver has been named a Tillman Scholar by the Pat Tillman Foundation. A student in the doctor of nursing practice (DNP) program at Rutgers University–Camden, she is one of only five nursing students, and only 61 students overall, to earn this highly competitive scholarship.

Additionally, Tolver is one of two students attending Rutgers, The State University of New Jersey, to receive this award. No other New Jersey university or college received a Tillman Scholarship in 2017.

Tolver began her service in the U.S. Marine Corps in 2011. She was named recruit training honor graduate, received meritorious masts, and was awarded Squadron Marine of the Quarter. Stationed in North Carolina, she was an aircraft mechanic on the MV-22 Osprey.

It was her family ties that led Tolver to pursue a career in nursing. She was honorably discharged from the USMC in order to care for her father, who had suffered an anoxic brain injury. “For the first few months, I spent virtually every minute of every day in the hospital, interacting with his doctors and nurses,” she recalls. “I saw the care that he was getting, and I really wanted to be part of that for someone else.”

Tolver also was a support for her mother, who suffered from congenital heart defects and renal disease. But it was her grandmother’s example that ultimately compelled her to enroll in the accelerated bachelor’s degree program at the Rutgers School of Nursing–Camden.

“My grandmother earned her master’s in nursing at a time when African Americans couldn’t practice in most areas of the country,” she says. “Her persistence and passion paid it forward for me, and her struggle taught me the value of dedication.”

After earning a bachelor’s degree in liberal studies from Wilmington University, Tolver met with representatives from the Rutgers–Camden nursing school, who connected her with the Rutgers–Camden Office of Veterans Affairs. From there, she received the support and encouragement needed to realize her dream of becoming a nurse.

“The veterans services office at Rutgers–Camden took care of me. They showed me benefits for vets that I didn’t even know existed, which made my Rutgers degree affordable and accessible,” says Tolver.

It was the Rutgers–Camden veterans services office and its director, Fred Davis, that helped her access important services to deal with a dark period in her life. “I was sexually assaulted while I was in the military. I kept silent for such a long time, but the assault was like a thorn in my side that I needed to address in order to find peace. Fred Davis had a relationship with The Vet Center in Philadelphia. They helped me with counseling, and that helped me to grasp and be vocal about what happened to me,” reflects Tolver.

“If it wasn’t for Fred Davis, the late Josh Piccoli, and the Rutgers–Camden veterans office, I would never have accessed this resource. I would not have been able to grow.”

Rutgers University–Camden is New Jersey’s first and only Purple Heart University. The campus consistently is recognized as a “Military Friendly School” by the magazine G.I. Jobs.

Tolver’s growth while earning her undergraduate degree at the Rutgers School of Nursing–Camden has been impressive. She was inducted into the Athenaeum and Sigma Theta Tau honor societies, and was a member of the Student Veterans Association and the National Student Nurses Association. She also worked with other nursing students by traveling to Haiti to help that country recover from the devastation of Hurricane Matthew.

In May 2017, she received her bachelor of science in nursing degree from Rutgers University–Camden, where she currently is pursuing her doctor of nursing practice degree in adult gerontology.

“Life experience in any capacity is beneficial,” she says. “If you learned from a situation, consider it tuition.”

A native of Burlington Township, Tolver is an active member of Change Church (formerly Kingdom Church) in Westampton. She is the daughter of Karen Bailey and Edward Tolver, both deceased.

In 2002, Pat Tillman proudly put his NFL career with the Arizona Cardinals on hold to serve his country. Family and friends established the Pat Tillman Foundation following his death in April 2004 while serving with the 75th Ranger Regiment in Afghanistan. Created to honor Tillman’s legacy of leadership and service, the Pat Tillman Foundation invests in military veterans and their spouses through academic scholarships to build a diverse community of leaders committed to service to others.