Finds Physicians are Most Trusted Source 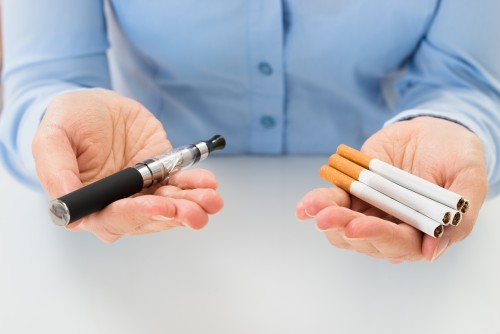 Q: Why is this topic important to explore? A: Recent research by Rutgers and the Truth Initiative shows nearly half of daily cigarette smokers reported having tried e-cigarettes (Nicotine & Tobacco Research, 2015; doi: 10.1093/ntr/ntv237). Understanding how smokers learn about e-cigarettes, as well as where they get their information from about the risk and safety of these devices is important given that this information may impact smokers’ e-cigarette perceptions and use.

Q: What were some of your findings? A: We surveyed 519 adult current cigarette smokers to learn about their e-cigarette information sources. Smokers most frequently reported seeing e-cigarettes in stores (86.4 percent) and used in person (83 percent). Many (73 percent) had also heard about e-cigarettes from known users, broadcast media ads (68 percent), other (print/online) advertisements (71.5 percent), and/or from the news (60.9 percent).

Q: So who do smokers trust when it comes to learning more about the safety of e-cigarettes?A: More than one-third of surveyed smokers said they would turn to a doctor first for e-cigarette safety information. Most (59.6 percent) ranked doctors as the most trustworthy source, and 6.8 percent had asked a health professional about e-cigarettes.

Q: What does this say about the conversation between smokers and their doctors? A: Given that physicians were by far perceived as the most trustworthy source and that physicians have historically been influential in motivating smokers to quit, it is important for health professionals to be informed about e-cigarettes and feel comfortable in talking to their patients about the devices. Physicians should increasingly expect their patients to ask about e-cigarettes.

Q: Any other takeaway message? A: We also found that nearly a quarter of those surveyed said they would turn to the Internet or product packaging first for information about e-cigarettes. While there may be little that can be done about e-cigarette information found online, the study’s findings underscore the need for e-cigarette regulation that would require standards in product labeling and packaging.

Having been awarded a $2.9 million grant (R01CA190444-01A1) from the National Cancer Institute, Dr. Delnevo will continue with the exploration of e-cigarettes along with co-principal investigator Michael B. Steinberg, MD, MPH, FACP, who is the director of the Rutgers Tobacco Dependence Program, a research member at Rutgers Cancer Institute, a professor of medicine at Rutgers Robert Wood Johnson Medical School, and an associate professor of health education and behavioral science at Rutgers School of Public Health. Their project – which will run through May of 2020 – will examine physicians’ perceptions, attitudes and communication mechanisms with regard to e-cigarettes.