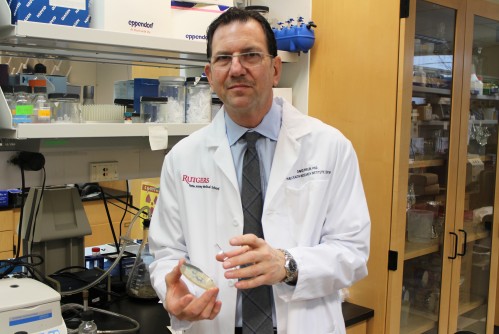 Rutgers infectious disease expert David Perlin leads a team that will use an NIH grant of up to $26 million to seek new ways to combat deadly bacterial resistance.

With a five-year grant of up to $26 million, Perlin will participate in the Centers of Excellence for Translational Research (CETR), a public-private partnership that brings together prominent scientists from Rutgers as well as other institutions. “We are poised for a new era of antimicrobial discovery,” says Perlin. “By joining together leading researchers from academia and the commercial sector in a highly interactive collaborative partnership, and providing comprehensive resources that support drug discovery, we can overcome many of the barriers that limit antibiotic development and begin to reinvigorate the drug pipeline.”

When modern antibiotics were introduced in the 1940s to help control deadly bacterial disease, they were greeted as wonder drugs. Now, just a few generations later, bacteria have adapted and become resistant to many of those drugs, creating a profound new threat to human health.

According to the Centers for Disease Control and Prevention, more than two million people are sickened every year in the United States with antibiotic-resistant infections resulting in at least 23,000 deaths, and health experts predict that serious illness with enhanced death tolls will continue to rise without major new drug discoveries. With few new drugs being developed, many serious infections have become largely untreatable.

Senior leaders of the research team assembled by Perlin, who also is executive director of the Regional Biocontainment Laboratory (RBL) at Rutgers, include Sean Brady, a chemical biologist at The Rockefeller University in New York City; David Alland, an infectious disease researcher at Rutgers New Jersey Medical School; Joel Freundlich, a medicinal chemistry expert from New Jersey Medical School; and Richard Ebright, principal investigator in Rutgers’ Waksman Institute of Microbiology. The institute's founder, Selman Waksman, received a Nobel Prize for the development at Rutgers of the groundbreaking antibiotic streptomycin in 1943.

The global biopharmaceutical company Cubist, the first industry member of the consortium, will have an essential role in the research effort, which will include collaborating to advance new discoveries into the clinical development stage. The recently-formed Institute for Infectious and Inflammatory Diseases at New Jersey Medical School will also play a key role in the partnership as will other major components of the newly-aligned Rutgers scientific community.

CETR will include sophisticated core resources through which highly promising early concept molecules developed by the research team can be turned into potential antibiotics suitable for clinical testing. The center will have access to facilities that include the Rutgers Regional Biocontainment Laboratory, an NIH-designated national research center for pathogens such as high-threat bioterror agents that can be engineered to be resistant to existing antibiotics. The team also will seek to develop new bacteria-fighting approaches that are designed to sidestep, or at least significantly slow, development of bacterial resistance in the future. Perlin and a distinguished Scientific Advisory Committee, which includes veteran members of the pharmaceutical industry, will guide the overall program.