The software, which is being used by law enforcement agencies around the world, is being used as a teaching tool for criminal justice students. 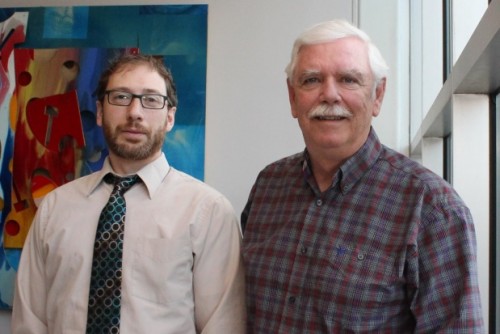 Newswise — NEW BRUNSWICK, N.J. – RTMDx, a program developed by Joel Caplan and Leslie Kennedy, who are faculty members in criminal justice at Rutgers University–Newark, is now being licensed through Rutgers’ SoCrates program to SUNY Cortland for use in classrooms.

RTMDx is the software package that was produced by Caplan and Kennedy’s research into risk terrain modeling. The spatial risk analysis technique takes crime data for a specific locale, combined with other data about the physical environment, and then forecasts where new crimes are likely to emerge and cluster.

Adam Levine, who teaches a course on GIS/FIS (geographic information systems, facilities information systems) at SUNY Cortland, is the first on that campus to use the RTMDx software and began using it during the current semester. His students viewed an introductory video lecture from Caplan, and then Levine taught them to use the software. The students currently are working on their final project, which entails conducting a RTM analysis on a specific location and then providing conclusions based on the analysis.

Levine also conducted an RTM analysis for a local police department in the Cortland area and is meeting with the department’s chief next week to present his findings.

RTMDx is now being used for crime analysis and prevention around the world, including major cities such as New York, Chicago, Paris, Milan and Bogotá, and on six of the world’s seven continents.

“Crime hotspots tell you where to go, but not what to do when you get there," said Kennedy, University Professor of Criminal Justice and director of the Rutgers Center on Public Security. "As symptoms of risky places, mapping recent crime yields valuable information, but not the complete picture of a problem place. Our system lets police prioritize risky places before crimes emerge and thoughtfully implement risk-mitigation activities. It’s crime forecasting with a focus on places, not people.”

Joel Caplan is an associate professor specializing in GIS mapping and spatial analysis, computational criminology, and policing. He joined Rutgers–Newark in 2008, and currently serves as the deputy director of the Rutgers Center on Public Security. Caplan and Kennedy won an award from the International Association of Crime Analysts for RTMDx in 2014.

About Rutgers – Rutgers, The State University of New Jersey, is a leading national research university. Established in 1766 and celebrating a milestone 250th anniversary in 2016, it is the eighth oldest higher education institution in the nation. More than 69,000 students and 22,000 faculty and staff learn, work and serve the public at sites across New Jersey and around the world. Rutgers–New Brunswick is the state’s only public institution in the prestigious Association of American Universities. Rutgers belongs to the Big Ten Academic Alliance, which comprises 14 world-class research universities. It is among the top 20 public U.S. universities for total R&D funding, and over the past two years has seen a 22 percent increase in research grants and sponsored programs, up to $637.9 million in FY2016. The Office of Research and Economic Development is a central point for industry to access Rutgers and offers a website for industry: businessportal.rutgers.edu.