25-Jul-2013 9:00 AM EDT, by Rutgers University's Office for Research
favorite_border 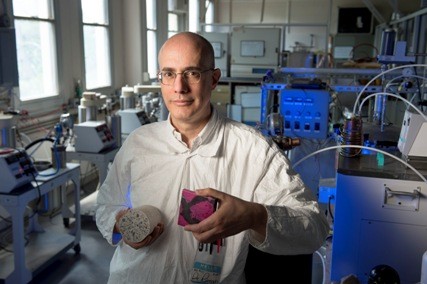 Newswise — Rutgers, The State University of New Jersey, has received two additional patents over the past year for a novel system to manufacture concrete and other hard materials while better managing carbon dioxide, either by emitting less CO₂ during production or consuming it during the curing process.

The new patents are among more than 50 associated U.S. and foreign patents and patent applications that have been licensed by Rutgers to Solidia Technologies® of Piscataway. The local start-up is developing and marketing the low-temperature solidification process, which was chosen recently for R&D Magazine’s 2013 R&D 100 Awards. The prestigious honor, which is given for “revolutionary technologies newly introduced to the market,” spans industrial, academic and government-sponsored research.

The inventors are Richard Riman, Rutgers distinguished professor of materials science and engineering and Solidia’s founder, and Vahit Atakan, Solidia’s R&D director and a former doctoral student in Riman’s lab.

“Together, these patents teach a unique method that enables companies to lower their environmental footprint by operating at far lower temperatures than the conventional method and providing a new means for carbon sequestration,” Riman said. “This innovation has broad application in the ceramics industry and in the production of high-performance concrete.”

Solidia’s patented technologies have the potential to reduce the carbon footprint of concrete products by up to 70 percent. Requiring only modest changes to the processes currently used to make cement and concrete, Solidia’s process, which is more energy- and resource-efficient, makes solids out of packed powders without using a high-temperature kiln or furnace. The process produces innovative materials that offer greater strength and durability.

“When Rutgers licensed these radically innovative patents, we had high hopes for their commercialization, and Solidia Technologies has proven to be an excellent partner for realizing these lofty expectations,” said Kenneth J. Breslauer, Rutgers interim vice president for research and economic development and Linus C. Pauling professor of chemistry and chemical biology.

ABOUT RUTGERSEstablished in 1766, Rutgers is America’s eighth oldest institution of higher learning and one of the nation’s premier public research universities. Serving more than 65,000 students on campuses, centers, institutes and other locations throughout the state, Rutgers is the only public university in New Jersey that is a member of the prestigious Association of American Universities. Rutgers was #1 nationally among public universities in terms of increased federal funding from FY2002 to FY2011, according to the NSF data. The university saw a 185% increase over those ten years, followed by Ohio State (177%), Georgia Tech (158%) and Purdue (142%).

ABOUT SOLIDIASolidia Technologies® is a sustainable technology company with a patented scientific process that makes it easy and profitable to use CO2 to create better building, construction and industrial products. It provides the global construction materials industry and small-scale CO2 emitters a way to benefit from the carbon economy.