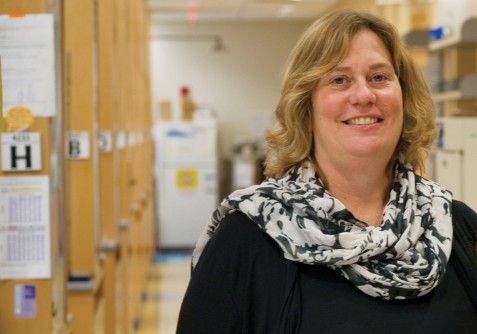 Newswise — New Brunswick, NJ—Scientists are closer to discovering what makes some individuals better able to clear viral infections than others can, thanks to a new study by researchers at Rutgers Robert Wood Johnson Medical School’s Child Health Institute of New Jersey (CHINJ) and the University of Chicago.

The research, reported in the Aug. 15 cover story of Immunity, marks the first time scientists have been able to pinpoint the genetic reason a specific strain of mice is able to produce antibodies that block infection by distinct retroviruses, the same class of viruses as the human immunodeficiency virus (HIV) that causes AIDS. It also showed how mutations in the specific proteins that help people’s immune system recognize foreign pathogens such as viruses can impact the individual’s ability to produce antibodies against that pathogen.

These findings represent the intersection of some two decades of research by scientists whose work in the areas of microbiology, genetics and immunology finally united via a common link.

Lisa K. Denzin, associate professor of pediatrics at CHINJ, had spent the past 25 years studying MHC genes—a genetic system that labels cells as “self” versus “non-self,” thereby allowing the body’s immune system to recognize foreign molecules and avoid targeting itself. Her progressively targeted studies involving the MHC protein H2-O led to a number of discoveries about its potential role in autoimmune diseases and helped establish her as one of the world experts on the protein, but she was still working toward further understanding of the precise functioning of this molecule.

Microbiologist, geneticist and immunologist Tatyana V. Golovkina, nearly 800 miles away at a lab in the University of Chicago, was narrowing down a painstaking search for the mechanism that enables the body’s immune system to detect retroviral infections and neutralize those viruses—a hunt that had consumed her research for the past 20 years. When she discovered that the protein H2-O might be the source of the immune response, the two scientists decided to join forces. The resulting collaboration, they say, is one of the most successful of their careers.

Over the course of the next few years, through in-person visits to Dr. Golovkina’s lab in Chicago, frequent Facetime discussions, and what Denzin describes as “nearly constant” text messages, the two scientists forged a partnership that paired their unique skill sets to solve this biological puzzle.

Together with computational biologist Aly A. Khan from the Toyota Technologic Institute and teams from CHINJ and the University of Chicago, Denzin and Golovkina definitively identified H2-O as the gene responsible for controlling the antibody response to mouse retroviruses, but also uncovered some surprising results. For example, counter to the prevailing theory that all mechanisms involved in immune response are dominant traits, they discovered that this particular mechanism is recessive, meaning two copies of the altered molecule would be needed in order to resist pathogens. The research also shed light on H2-O’s previously unappreciated role in controlling persistent viral infections. In addition, the findings indicate that, in people, some individuals’ ability to clear hepatitis B or hepatitis C viruses might be a result of mutations in the HLA-DO gene, which is the human equivalent of H2-O, says Denzin.

“Some people can get the same virus and some get very sick, while others don’t. It could be in part due to different variants of these molecules. Your [HLA-DO] could be different from mine, and I have a better immune response than you do because mine doesn’t function as well in inhibiting antibody responses,” she says.

If that hypothesis proves true, it opens up a number of areas for ways to deal with chronic viral infections like hepatitis B and C, and HIV. It could be important in terms of developing pharmaceuticals to promote immune response in people who are sick, Denzin explains. It could also be important in helping prevent autoimmunity by “turning up” the molecule’s normal functioning. And, it could potentially be used as an additive during vaccination, where you would incorporate something in the vaccine design to inhibit the function of the HLA-DO molecule, thereby giving the person a stronger immune response to that vaccine, she says.

“So there are lots of therapeutic options and potential here, once we know more,” she says.

“My lab has shown before that small changes in this pathway can translate to a big difference in immune responses,” Denzin continues, “but which cells are doing it? How is it happening? When is it happening? What are the important events that lead to either an antibody response or no antibody response? The virus could have evolved in a way to subvert an immune response—to hide from the immune system—and prevent this protein from functioning. These are the things we hope to figure out in the next couple of years.”

Eventually, says Golovkina, they hope to gain a better understanding of how the molecule regulates immune response, so that they can translate their findings to explain why people respond differently to the same viral infections.

Their research was supported in part by funding from the U.S. Department of Health and Human Services, the National Institutes of Health, and the Robert Wood Johnson Foundation. In addition to Denzin, Golovkina, and Khan, the research team includes CHINJ’s Francesca Virdis and Michele Witkowski; Alexander V. Chervonsky, Jessica Wilks, Melissa Kane, Helen A. Beilinson, Stanislav Dikiy and Laure K. Case from the University of Chicago; and Derry Roopenian from the Jackson Laboratory, Maine.