Jose Medina, the son of Cuban émigrés, is also an activist, raising funds for cancer and volunteering to improve communities 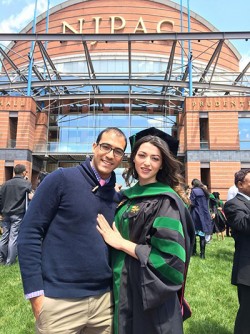 Jose Medina with his wife, Ellina Hattar-Medina, at her graduation from New Jersey Medical School in 2016.

Newswise — With a healthy streak of activism, tempered by a keen interest in helping others, it’s totally in Jose Medina’s character to be a change agent. Trained in social work and bioethics, the second-year medical student – who was recently elected to the Association of American Medical Colleges as a student delegate – has his sight on specializing in family medicine so he can provide health care to those in need.

“I believe a strong factor in swaying fellow representatives to vote for me was my background in social work and my role here at New Jersey Medical School creating informal learning opportunities, via the Humanism Center, for topics related to health and humanism in medicine,” said Medina, who as a delegate to the northeast region of the AAMC’s Organization of Student Representatives, is the first NJMS student to hold a national leadership position. “I’m excited about this opportunity to connect with other students and learn about innovations and best practices at other medical schools.”

Medina was born in Miami. His parents, Cuban émigrés, came to the U.S. in the late 1960s to escape the Castro regime. They first settled in New Jersey, later relocating to the vibrant Cuban community in Miami, where they operated a traditional Cuban bakery. His dad, a food scientist, had worked for Entenmann’s, the large commercial baker. “He knows how to do all kinds of food-related things and that includes mass-producing baked goods,” explains Medina. “I pretty much grew up in the bakery and learned to bake alongside my parents. Everyone loves my pumpkin cheesecake.”

Medina has always been interested in a career in heath care, but took a roundabout route to medical school. He obtained his undergraduate degree in public health at Johns Hopkins University, where many of his fellow students aspired to become physicians. There he became involved in 4K for Cancer, an annual cross-country bike trip (Baltimore to San Francisco) to raise money for cancer research. An avid biker, he was the ride’s tour director in 2010, leading a group of 28 bikers across country, raising more than $120,000. “The trip takes two months,” he says. “We slept in schools, churches, YMCAs and even outdoors, once we got to the desert. Along the way we did some education and fundraising. It was a life-changing experience.”

Nearing graduation, he’d almost finished his medical school applications but decided to go in a different direction. “Hopkins gave me a great education and opened my eyes to all the different options open to me, and not just medicine,” he says. “I wanted to take some time to explore them.”

He signed on with the nonprofit organization WorldTeach, which sends volunteer teachers to developing countries, and traveled to Guyana to teach math and science to high school students. “Guyana is a community-minded society and I fell in love with it,” he says. “But there’s also great poverty. I experienced what happens when safety net systems don’t exist, and it made me even more interested in social work.”

After a year he returned to the U.S. to complete a Master of Social Work and a Master of Bioethics at the University of Pennsylvania. His training included the full range of social work experiences, including a stint supervising community health workers. Working with individuals with high rates of illness and hospital readmission rekindled his desire to become a physician, so he applied to NJMS as an early decision candidate.

Medina was well acquainted with NJMS because his wife, Ellina Hattar-Medina, is a 2016 graduate. The two met as undergraduates at Johns Hopkins. She’s currently a resident in neurosurgery at Thomas Jefferson University Hospital in Philadelphia. Drawn to NJMS because of its commitment to community engagement, he volunteers with the Department of Family Medicine’s Student Family Health Care Center and is a fellow at the Healthcare Foundation Center for Humanism and Medicine.

Medina’s vision for the future includes specializing in family medicine so he can provide health care to the full spectrum of those in need. “With the tremendous shortage of basic primary care in our country, many people lack access to health care,” he says. “These are the communities I want to serve, whether it’s through practicing medicine, working for a state or city health department, or being involved in policy.”