S&T Testing Provides a Better Understanding of How Chlorine Spreads

Newswise — Our society relies heavily on chlorine. It is widely used in many forms - from plastics and household cleaning chemicals to chlorinated pool and tap water. Each year, millions of tons of pressurized chlorine gas are safely transported in tankers through highly populated areas to be used in a variety of chemicals and products. Due to the potential health risks, however, it’s essential to have a thorough understanding of how chlorine gas can spread should it ever escape from containers, either in the case of an accident or intentional attack.

For this reason, the Department of Homeland Security (DHS) Science and Technology Directorate (S&T) conducted a series of large-scale field tests in 2015 and 2016, releasing chlorine to determine how the gas spreads and how it reacts with different materials. Called Jack Rabbit II, these tests were conducted and led by S&T’s Chemical Security Analysis Center (CSD) and were co-sponsored by the Department of Defense’s  Defense Threat Reduction Agency. CSD is part of S&T’s Homeland Security Advanced Research Projects Agency.

These experiments were also sponsored through S&T’s partnerships with Defense Research and Development Canada’s Centre for Security Science and Transport Canada. In 2010, S&T led and conducted the Jack Rabbit I tests, which were much smaller in scale, involving both chlorine and ammonia.

The Jack Rabbit II testing site was situated in the barren desert salt-flats in Utah at the U.S. Army’s Dugway Proving Ground—a large, extremely remote and secure test range for biological and chemical defense capabilities. There, an interagency and international team of scientists led by S&T’s Dr. Shannon Fox, Jack Rabbit I and II program manager, performed multiple outdoor chlorine release tests to address data and knowledge gaps critical to hazard prediction modeling, industrial safety and emergency preparedness and response. In the 2015-2016 testing, Fox’s team successfully conducted a total of nine field trials, unprecedented in size and scope, in which five to 20 tons of pressurized liquefied chlorine was rapidly released from storage tanks and a tanker truck vessel.

Fox presented Jack Rabbit II’s findings in May at the Euro Chlor Technology Conference in Berlin, Germany. “A lot of countries, just like the United States, are looking to understand the predictions and how to minimize and reduce the risk from chlorine. We had nine different countries involved in the Jack Rabbit II as participants, planners and stakeholders,” he said. “There is also quite a bit of concern because chlorine is increasingly being used as a weapon.

”Chlorine is a yellow-green gas, two-and-a-half times denser than air. Because of this density, it stays close to the ground and collects in low-lying areas when released. When compressed, even at room temperature, it will become a liquid, which is how it is stored and transported.

Although found naturally in many safe and stable forms such as table salt (sodium chloride), chlorine gas is highly reactive and can cause rapid corrosion and damage to many substances including metals and living tissue. Inhalation of dangerous doses will rapidly damage the airways and lungs, and can result in severe injury or death.

“Chlorine can be very dangerous, so there is a great deal of interest to make sure we understand it completely to minimize the risk,” said Fox.

The spread of chlorine depends on various factors such as quantity, wind direction and speed, and direction of gas release (up, down, or sideways). To fully understand the effect of all these variables, Fox’s team conducted tests in two phases.

During Phase I, S&T released five to nine tons of liquefied chlorine in five tests to see how different quantities spread through a mock urban grid made of cargo containers. The scientists also measured how much of the gas leaked inside structures and vehicles, and studied how chlorine affects different first responder equipment.

Fox and his team parked several emergency vehicles close to the chlorine containers to see chlorine’s impact on their structural integrity and operation. Although they observed high corrosion of exposed metal surfaces, the vehicles could still run and operate.

Collaborating scientists from Lawrence Berkeley National Laboratory also conducted experiments measuring chlorine inside the vehicles and cargo containers to understand the risk to people sheltering inside buildings and cars.

In Phase II, S&T conducted four tests, this time releasing 10 to 20 tons of chlorine. The gas was released at different angles – downward, upward and sideways from 10-ton tanks, and downward from a full 20-ton tanker truck. Sensors measured a chlorine concentrations of 100,000 parts per million and above near the source of the release, which meant the air consisted of at least 10 percent chlorine.

The results of these tests can help emergency managers better prepare for different scenarios depending on the direction of chlorine release.

With the vast amounts of unprecedented data and information that has been generated in Jack Rabbit II, S&T is now engaging a broad range of interagency stakeholders to make improvements in emergency preparedness and response, training, hazard modeling and industrial safety.

Jack Rabbit II will end in 2018. Scientists are currently studying the damaging effects of chlorine on soil and vegetation.

“Chlorine is not something we can just stop using; it is critically important. But by studying it and understanding it, we can minimize that risk and danger to the greatest extent possible, ultimately saving many lives,” Fox said.

For more information on S&T’s work to strengthen our nation’s chemical and biological defense capabilities, visit the Chemical and Biological Defense Division’s webpage.

Caption: Chlorine spreads in a mock urban grid during one of the tests in Phase I of Jack Rabbit II. Some of the containers are configured to mimic residential and office structures where indoor chlorine concentration was measured. 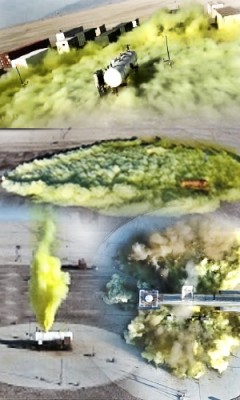