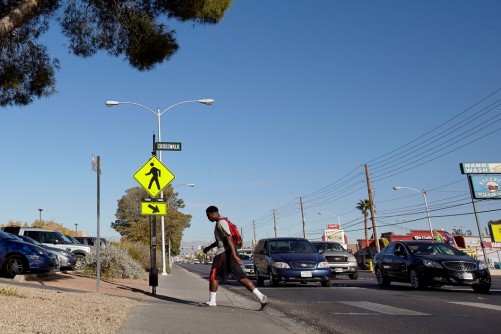 UNLV researchers have been studying pedestrian bias in crosswalks.

Newswise — LAS VEGAS — A UNLV study has found that motorists approaching mid-block crosswalks are less likely to yield for black pedestrians than white pedestrians. And, the pedestrian bias is apparently even worse in high-income than low-income neighborhoods.

Researchers say the findings — which replicate the results of a similar study out of Portland — may help explain why people of color are disproportionately affected by fatal pedestrian crashes.

According to the Centers for Disease Control, pedestrian fatality rates between 2001 and 2010 for black and Latino men were more than twice the rate for white men, and American Indian/Alaska Native men had a rate more than four times higher.

For three consecutive years, the number of pedestrian deaths in Nevada have increased. In March 2016, the state declared an epidemic of pedestrian fatalities with numbers up 46 percent from the same time period in 2015. In 2016, Smart Growth America ranked Nevada as the 12th most dangerous state to be a pedestrian, and Las Vegas as the 21st most dangerous metropolitan area (out of 52).

Researchers had two female students, one white and one black, of similar height and build and wearing jeans and neutral-colored shirts take turns crossing the street alone in a high- and a low-income neighborhood on opposite ends of the valley about 130 times (roughly 30 times each per neighborhood). The observations took place between 10 a.m. and noon, peak daylight hours, on a Saturday and Sunday.

In the low-income neighborhood, there was no significant difference in driver yield rates for pedestrians either on the curb or in the road.

UNLV researchers wondered whether the speed limit (45 mph in the high-income neighborhood vs. 35 in the low-income area), difference in road design, or drivers being unaccustomed to seeing pedestrians contributed to poor yielding behaviors overall at the high-income intersection.

Nonetheless, they called for implementation of policies, such as lower speed limits, or pedestrian safety enhancements, such as push-button activated stop lights, to make roadway use equitable for all users.

Courtney Coughenour, the UNLV Community Health Sciences professor who led the study, said other methods of increasing safety might include police enforcement of proper crosswalk rules or driver and pedestrian education campaigns designed to foster understanding that motorists by law must yield to pedestrians and that "no one type of user owns the road; cars, pedestrians and cyclists have the same right to those shared spaces and deserve respect."

That's troubling, given that the Vision Zero Initiative, a multi-national road safety project aimed at creating traffic systems with no fatalities or serious injuries, reports that pedestrians struck at 30 mph do not survive 50 percent of the time and those struck at 40 mph die 90 percent of the time.

"We've been very effective at designing our roadways to move cars. Unfortunately, this is sometimes done at the expense of pedestrian safety," Coughenour said.

She said the study and similar findings from Portland show that pedestrians of color experience an increased risk on the roadway, which may be one factor that contributes to the higher rates of pedestrian crashes.

"From an urban design perspective, it is important to take this into consideration when designing pedestrian facilities, especially in communities of color," Coughenour said. "Given the design of this study, we are unable to determine the nature of driver bias. However, often times the decision of whether or not to yield to a pedestrian is made very quickly, so it is likely that any bias drivers may have is unconscious. It's important to understand and discuss findings of this nature, as dialogue is a critical first step in beginning to address such biases."

UNLV students are continuing research on this topic, examining various types of bias and working to understand what might be done in the short term to enhance pedestrian safety.