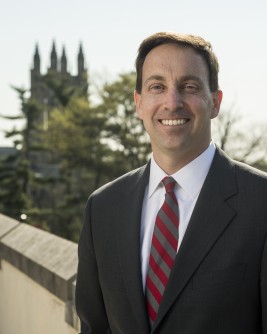 Newswise — PHILADELPHIA (April 22, 2015)—The Saint Joseph’s University Board of Trustees today elected Mark C. Reed, Ed.D., as the Jesuit institution’s 28th — and first lay — president in its 164-year history. Reed currently serves as senior vice president and chief of staff at Fairfield University, in Fairfield, Conn., which along with Saint Joseph’s is one of the nation’s 28 Jesuit colleges and universities.

“The Board of Trustees made history today in electing Mark Reed as the first lay president of Saint Joseph’s University,” says Edward W. Moneypenny ’64, chair of SJU’s Board of Trustees. “Dr. Reed’s lifelong commitment to Jesuit values and mission, and his outstanding record as a leader in Catholic higher education, make him the perfect choice to lead Saint Joseph’s into the future.”

On July 1, Reed will succeed current president C. Kevin Gillespie, S.J. ’72, who announced last August that he would step down at the end of his three-year term. An inauguration ceremony for Reed will be held in the fall.

“On behalf of the Maryland Province, I am pleased to endorse Dr. Mark C. Reed as the president-elect of Saint Joseph's University,” says Robert M. Hussey, S.J., the provincial of the Maryland Province of the Society of Jesus. “Given Dr. Reed's dedication to Jesuit education and Ignatian values, I have the utmost confidence in his ability to lead the mission of Saint Joseph's with great wisdom, strength and vision.”

“I am honored and humbled to be chosen as Saint Joseph’s University’s first lay president,” says Reed. “As a Philadelphia native, I have known and cared about Saint Joseph’s all of my life. I am deeply inspired by its Jesuit, Catholic heritage, its reputation for academic excellence, and its dedication to serving the surrounding community and the world beyond its borders. I look forward to working with the University’s outstanding faculty and staff to help fully realize its mission.”

At Fairfield, Reed leads and manages the university’s largest non-academic division. As the principal advisor to Fairfield president Jeffrey P. von Arx, S.J., he is the senior officer of the university and its leadership team, and has been responsible for the execution of multiple strategic plan initiatives. In addition, he has directly solicited and received funding commitments at all levels, including a recent $10 million gift to expand and modernize the campus recreation complex.

“The presidential search committee was charged to find a visionary leader to champion its mission through a time of growth and change,” adds Robert J. Bowman ’81, vice chair of the Board of Trustees and chair of the presidential search committee. “After conducting an open, nationwide search, Dr. Reed emerged as the top candidate among an impressive field of highly qualified applicants — both lay and Jesuit. We are confident in his superb leadership skills coupled with extensive experience in higher education, and his lifelong passion for Jesuit values. Dr. Reed will serve Saint Joseph’s with great energy, creativity and distinction.”

Preceding his career in higher education, Reed worked as a teacher and administrator in Catholic secondary education. Reed, his wife Kate, and their two young daughters will be relocating to the Philadelphia area this summer.

Background: As Philadelphia's Jesuit, Catholic University, founded by the Society of Jesus in 1851, Saint Joseph's University provides a rigorous, student-centered education rooted in the liberal arts. SJU ranks as a top university in the Northeast, with a Phi Beta Kappa chapter in the College of Arts and Sciences and AACSB accreditation of the Erivan K. Haub School of Business. The University is also deeply committed to the Jesuit tradition of scholarship and service, earning a place on the President's Higher Education Community Service Honor Roll and the community engagement classification from the Carnegie Foundation for the Advancement of Teaching. With courses offered on campus and online, SJU prepares its more than 9,000 undergraduate, graduate and doctoral students to lead lives of personal excellence, professional success and engaged citizenship.