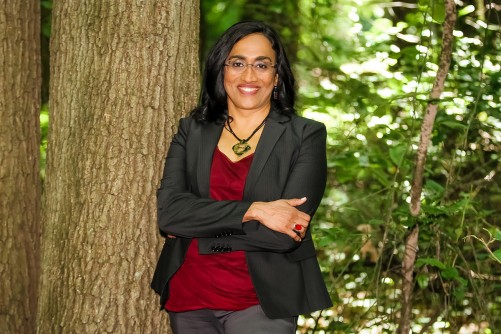 Newswise — PHILADELPHIA (June 29, 2017) — Shaily Menon, Ph.D., an accomplished biologist and administrator, will join Saint Joseph’s University as the next dean of the College of Arts and Sciences. Menon will assume the role effective August 1, 2017.

Menon most recently held the position of associate dean for research, facilities planning and community engagement in the College of Liberal Arts and Sciences at Grand Valley State University (GVSU) in Allendale, Michigan. In that role, she worked tirelessly to foster a culture of academic excellence, providing grant support, enhancing research and creative activities for faculty and students, and acting as a leader to improve and renovate facilities for the sciences, arts and humanities.

An ardent advocate of the value of the liberal arts, Menon participated in a revision of GVSU’s general education program to create sets of elective courses focused on contemporary issues. She believes strongly that many of the current and future challenges facing society require interdisciplinary thinking and collaboration between leaders from varied fields.

Menon brings to Saint Joseph’s a wealth of experience in setting priorities, identifying goals and shaping the future of an organization at multiple levels. She played an integral role in the development and execution of strategic plans as chair of GVSU’s biology department, as associate dean and as a member of the University’s Strategic Positioning Task Force.

In addition to this work, Menon is a firm believer in the importance of regional and global engagement. She has developed courses in which students worked with local organizations to address targeted community issues. She has also been an active supporter of underrepresented populations, serving on the board of directors for Asian Pacific Americans in Higher Education and as an inclusion advocate at GVSU.

“This appointment comes at a time of great opportunity for both the College and Saint Joseph’s as a whole,” says Jeanne Brady, Ph.D., provost and vice president for academic affairs. “I am confident in Dr. Menon’s ability to discern strengths and identify challenges, to encourage growth and innovation, and to lead the College in preparing its students for success in the classroom and beyond our walls.”

About Saint Joseph's University: As Philadelphia's Jesuit, Catholic University, founded by the Society of Jesus in 1851, Saint Joseph's University provides a rigorous, student-centered education rooted in the liberal arts. SJU ranks as a top university in the Northeast, with a Phi Beta Kappa chapter in the College of Arts and Sciences and AACSB accreditation of the  Erivan K. Haub School of Business. The University is also deeply committed to the Jesuit tradition of scholarship and service, earning a place on the President's Higher Education Community Service Honor Roll and the community engagement classification from the Carnegie Foundation for the Advancement of Teaching. With courses offered on campus and online, SJU prepares its more than 8,000 undergraduate, graduate and doctoral students to lead lives of personal excellence, professional success and engaged citizenship.