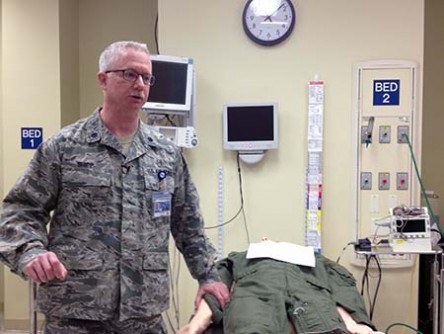 Saint Louis University's C-STARS (Center for Sustainment of Trauma and Readiness Skills) is the first and one of only three programs in the country that prepare Air Force medical staff to take care of patients injured in war.

Newswise — ST. LOUIS - Over a decade and thousands of Air Force medical personnel trained later, the C-STARS program at Saint Louis University is branching out to offer a special course for a group from the Missouri Army National Guard.

C-STARS (Center for Sustainment of Trauma and Readiness Skills) is the first program in the country to prepare U.S. Air Force medical technicians, nurses and doctors to take care of traumatic injuries to patients during war time. The two week course, taught by Air Force personnel on faculty at Saint Louis University, uses high-fidelity simulators to teach real world skills. The course includes a stint at St. Louis University Hospital working with patients.

Recently C-STARS hosted a one-day crash course that condensed its basic curriculum for members of the Missouri Army National Guard 206th Detachment from Jefferson Barracks. The group will return in May for the full C-STARS training.

Major Denise Winters of the National Guard pushed for the training for her soldiers.

"This training platform allows the medics the opportunity to practice their skills in a safe environment," Winters said.

She noted that other trainings typically involve an instructor lecturing to the medics, where the C-STARS instruction allowed them to use the animatronic patients to test their skills in real-world simulations.

The C-STARS program launched at Saint Louis University in 2003. Since then 19 sessions a year are held, training roughly 300 Air Force members annually.

C-STARS Director of Operations and Training Support Major Scott Fallin said 3,070 people have been through the program since its inception.

Lt. Col. Joseph M. Shipp, a SLU physician assistant and C-STARS instructor, said he hoped the one-day National Guard course would lead to future interaction between the Army and C-STARS.

"This is a very small snippet of what we have to offer in the two-week course here at C-STARS St. Louis, but one that we hope the Army will take advantage of and partner in a joint-service type environment," he said.

Fallin noted that the winding down of military actions in Afghanistan might lead some to question the need for programs like C-STARS.

"It's even more critical now to have this training, as many of these Airmen return to their roles at U.S. Military Treatment Facilities (MTFs) after being deployed," he said. "In Desert Storm we were unprepared from a medical perspective. We've come a long way since by partnering with academic centers of excellence such as SLU and the Air Force is committed to making sure that this training continues."