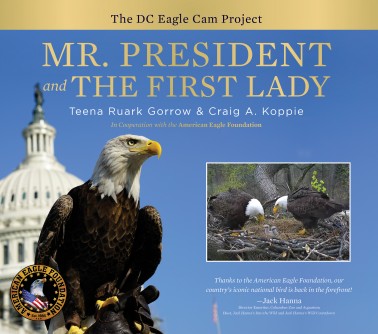 Newswise — SALISBURY, MD---It makes for a patriotic story: a pair of wild American bald eagles nesting in Washington, D.C., not far from the U.S. Capitol.

In cooperation with the American Eagle Foundation (AEF), the co-authors documented the two raptors – named Mr. President and The First Lady – that became an international Internet sensation via the DC Eagle Cam in 2016. With two high-definition, live-stream cameras placed above their nest in a tulip poplar tree in the U.S. National Arboretum, the birds garnered some 63 million fan views from 100 different countries.

“It was truly an honor to work with the American Eagle Foundation to showcase our national emblem – our national bird – in the nation’s capital,” Gorrow said. “AEF is an internationally recognized, not-for-profit 501(c)(3) organization whose mission is to care for, restore and protect the American bald eagle and other birds of prey. Purchasing books through AEF will help support wildlife education and conservation initiatives.”

According to the AEF, Mr. President and The First Lady “...will likely become the most talked about book among bald eagle enthusiasts in 2017.” It also was endorsed by Jack Hanna, director emeritus of the Columbus Zoo and Aquarium and host of Into the Wild and Wild Countdown.

With more than 300 cam images and photographs, the book features nest-building, egg-laying, egg-hatching and the transformation of the pair’s hatchlings – named Freedom and Liberty – into fledglings. The parents have returned to their nest for a third season, with The First Lady expected to lay a new clutch of eggs this month.

Through their books, Gorrow and Koppie hope to inspire in others an appreciation for wildlife and promote environmental stewardship. Their previous Schiffer titles include Inside a Bald Eagle’s Nest, a 2014 Green Earth Book Award winner, and Inside an Osprey’s Nest (2016).

Mr. President and The First Lady is now available at www.dceaglecam.org. Books are expected to ship in March.