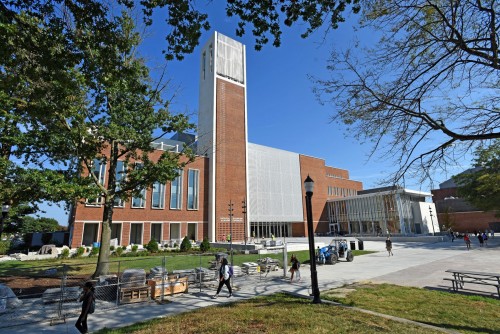 It turns out the Maryland chapter of the U.S. Green Building Council (USGBC) is a fan, as well. The organization recently named the building as the winner of its prestigious 2016 Wintergreen Award for Excellence in Green Building in Education category.

“For over a decade, sustainable design has been at the forefront of all new construction and renovations at Salisbury,” said Eric Berkheimer, SU associate vice president of facilities and capital management. “With the Patricia R. Guerrieri Academic Commons, our team went above and beyond, installing features that make it unique among buildings on campus.”

At the top of those elements — literally — is a 20,000-square-foot “green roof,” comprised of sedum and other regional low-growing plants, covering much of the top of the structure. They act as a collection and filtration system, absorbing and cleaning rainwater before a system of stone and concrete collectors distributes it back into the ground, significantly reducing runoff. The plant cover also serves as a natural buffer between the roof and sun, providing an interior cooling effect.

Inside, LED illumination not only uses less energy than traditional bulbs, but provides a spectacular effect in areas such as the main entryway. There, vertical light fixtures make an aesthetic — as well as environmental — statement.

In addition, paneling in the structure’s dining areas was created using recycled paper (including the fronts of the built-in recycling bins). Paint, carpeting and other construction elements were selected with an eye toward those with a low rate of volatile organic compound emissions. Materials were sourced locally when possible. The large sun screen covering much of the building’s exterior facing campus, for example, was built by Crystal Steel in Delmar, DE. It reduces fuel use and subsequent emissions.

These are just some of the environmental features of the $117 million, four-story, 221,000-square-foot building, the largest academic construction project in SU’s history.

This is not the first time the USGBC has lauded the University’s commitment to sustainability. The national organization has granted Leadership in Energy and Environmental Design (LEED) certification for nine buildings on campus, including Conway Hall, the first new construction project on the Eastern Shore to receive the designation, in 2008.