Salk Scientists Redraw the Blueprint of the Body's Biological Clock 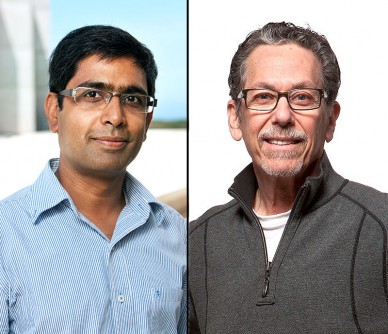 Credit: Images: Courtesy of the Salk Institute for Biological Studies

Newswise — La Jolla, CA----The discovery of a major gear in the biological clock that tells the body when to sleep and metabolize food may lead to new drugs to treat sleep problems and metabolic disorders, including diabetes. Scientists at the Salk Institute for Biological Studies, led by Ronald M. Evans, a professor in Salk's Gene Expression Laboratory, showed that two cellular switches found on the nucleus of mouse cells, known as REV-ERBα and REV-ERBβ, are essential for maintaining normal sleeping and eating cycles and for metabolism of nutrients from food. The findings, reported March 29 in Nature, describe a powerful link between circadian rhythms and metabolism and suggest a new avenue for treating disorders of both systems, including jet lag, sleep disorders, obesity and diabetes. "This fundamentally changes our knowledge about the workings of the circadian clock and how it orchestrates our sleep-wake cycles, when we eat and even the times our bodies metabolize nutrients," says Evans. "Nuclear receptors can be targeted with drugs, which suggests we might be able to target REV-ERBα and β to treat disorders of sleep and metabolism." Nurses, emergency personnel and others who work shifts that alter the normal 24-hour cycle of waking and sleeping are at much higher risk for a number of diseases, including metabolic disorders such as diabetes. To address this, scientists are trying to understand precisely how the biological clock works and uncover possible targets for drugs that could adjust the circadian rhythm in people with sleep disorders and circadian-associated metabolic disorders. In mammals, the circadian timing system is orchestrated by a central clock in the brain and subsidiary clocks in most other organs. The master clock in the brain is set by light and determines the overall diurnal or nocturnal preference of an animal, including sleep-wake cycles and feeding behavior. Scientists knew that two genes, BMAL1 and CLOCK, worked together at the core of the clock's molecular machinery to activate the network of circadian genes. In this way, BMAL1 acts like the accelerator on a car, activating genes to rev up our physiology each morning so that we are alert, hungry and physically active. Prior to this work REV-ERBα and β were thought to play only a minor role in these cycles, possibly working together to slow CLOCK-BMAL1 activity to make minor adjustments to keep the clock running on time. However, genetic studies of two genes with similar functions can be very difficult and thus the real importance of REV-ERBα and β remained mysterious. The Salk scientists got around this hurdle by developing mice in which both genes could be turned off in the liver at any point by giving them an estrogen derivative called tamoxifen. Now mice could develop normally to adulthood, at which point the scientists could turn off REV-ERBα and REV-ERBβ in their livers ---- an organ crucial to maintaining the correct balance of sugar and fat in blood ---- to see what effects it had on circadian rhythms and metabolism. "When we turned off both receptors, the animal's biological clocks went haywire," says Han Cho, first author on the paper and a postdoctoral researcher in Evan's laboratory. "The mice started running on their exercise wheels when they should have been resting. This suggested REV-ERBα and REV-ERBβ aren't an auxiliary system that makes minor adjustments, but an integral part of the clock's core mechanism. Without them, the clock can't function properly." Digging more deeply into the clockworks, the Salk scientists mapped out the genes that the REV-ERBs control to keep the body operating on the right schedule, finding that they overlap with hundreds of the same genes controlled by CLOCK and BMAL1. This and other findings suggested that the REV-ERBs, act as a brake on the genes BMAL1 activates. "We thought that the core of the clock was an accelerator, and that all REV-ERBα and REV-ERBβ did was to pull the foot off that pedal," says Evans. "What we've shown is that these receptors act directly as a brake to slow clock activity. Now we've got a accelerator and a brake, each equally important in creating the daily rhythm of the clock." The scientists also found that the REV-ERBs control the activity of hundreds of genes involved metabolism, including those responsible for controlling levels of fats and bile. The mice in which REV-ERBα and REV-ERBβ were turned off had high levels of fat and sugar in their blood ---- common problems in people with metabolic disorders. "This explains how our cellular metabolism is tied to daylight cycles determined by the movements of the sun and the earth," says Satchidananda Panda, an associate professor in Salk's Regulatory Biology Laboratory and co-author on the paper. "Now we want to find ways of leveraging this mechanism to fix a person's metabolic rhythms when they are disrupted by travel, shift work or sleep disorders." Other researchers on the study were Xuan Zhao, Megumi Hatori, Ruth T. Yu, Grant D. Barish, Michael T. Lam, Ling-Wa Chong, Luciano DiTacchio, Annette R. Atkins and Michael Downes, from the Salk Institute; Christopher K. Glass, of University of California San Diego; Christopher Liddle, of University of Sydney, Australia; and Johan Auwerx, of Ecole Polytechnique Fédérale, Switzerland. The research was supported by the National Institutes of Health, the National Health and Medical Research Council of Australia, the Leona M. and Harry B. Helmsley Charitable Trust, the Glenn Foundation for Medical Research and the Howard Hughes Medical Institute.About the Salk Institute for Biological Studies:The Salk Institute for Biological Studies is one of the world's preeminent basic research institutions, where internationally renowned faculty probe fundamental life science questions in a unique, collaborative, and creative environment. Focused both on discovery and on mentoring future generations of researchers, Salk scientists make groundbreaking contributions to our understanding of cancer, aging, Alzheimer's, diabetes and infectious diseases by studying neuroscience, genetics, cell and plant biology, and related disciplines.