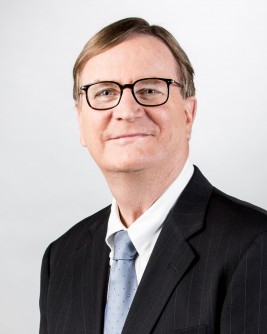 The appointment, which The University of California Board of Regents approved Jan. 23, 2014, places Hawgood at the helm of the $4 billion university during the national search for its 10th chancellor. He assumes the role from Chancellor Susan Desmond-Hellmann, MD, MPH, who will become chief executive officer of the Bill & Melinda Gates Foundation on May 1.

Hawgood has been dean of the UCSF School of Medicine and vice chancellor for medical affairs at UCSF since September 2009, after serving as interim dean since December 2007. The school has excelled under his leadership. It currently is ranked first among all schools nationwide in funding from the National Institutes of Health, indicating the excellence of its research enterprise. It also ranks fourth nationwide in both research and primary care education, according to the recent survey conducted by U.S. News & World Report.

As dean, Hawgood has been a core member of the Chancellor’s Executive Council, playing an integral role in the university’s leadership and guidance during a time of profound growth.

“Sam is a highly respected physician, scientist and leader, with a collaborative and inclusive style that will serve the campus well through this transition,” said UC President Janet Napolitano. “I have full confidence that his leadership will enable UCSF to maintain its renowned excellence in research, education and clinical care into the foreseeable future.”

Napolitano appointed an advisory committee of university faculty, staff, students, alumni and foundation representatives in January to support the national search, which Napolitano will oversee.

As dean of the School of Medicine, Hawgood leads an organization with an operating budget of more than $1.7 billion, nearly 8,000 faculty and staff, and 3,655 medical and graduate students, residents, fellows and postdoctoral scholars.

The school received $439.6 million in NIH funding in 2013, with many of its departments also leading the nation in their fields in these highly competitive grants.

As interim chancellor, Hawgood will oversee the entire UCSF campus, which is the only member of the 10-campus UC system that focuses solely on graduate-level education. In addition to the School of Medicine, it includes top-ranking schools of Dentistry, Nursing and Pharmacy, as well as a graduate division and UCSF Medical Center and Benioff Children’s Hospital.

The campus is renowned for its innovative patient care and groundbreaking fundamental science and translational research in such areas as cancer, cardiovascular disease, genetics, HIV/AIDS, neuroscience, pediatrics, pharmacology and stem cell research.

Hawgood will continue to advance UCSF’s initiatives in both clinical and basic science, including its leadership in the nascent field of precision medicine, bringing together the fields of genetics, molecular research, bioinformatics and medicine to understand the basis of diseases and provide predictive and precise therapies for patients.

During the transition, he also will maintain his current role as medical dean, as well as president of the UCSF Medical Group, the faculty plan that represents more than 1,800 physicians at UCSF.

Hawgood, 61, has had a distinguished career at UCSF, which he joined as a research fellow in 1982. He went on to become a professor, and later served as division chief of Neonatology, chair of the Department of Pediatrics and associate director of the Cardiovascular Research Institute, while also maintaining an active presence in clinical medicine and earning an international reputation in neonatology research.

A native of Australia, Hawgood completed medical school with First Class Honors at the University of Queensland in Brisbane, and trained there in pediatrics as a resident.

His scientific contributions have been recognized by numerous awards, publications and invitations to present in national and international forums. He is a past president of the Society for Pediatric Research, and was elected in 2010 to the Institute of Medicine (IOM), part of the National Academy of Sciences.

UCSF is the nation’s leading university exclusively focused on health. It is dedicated to transforming health worldwide through advanced biomedical research, graduate-level education in the life sciences and health professions, and excellence in patient care. It includes top-ranked graduate schools of dentistry, medicine, nursing and pharmacy; a graduate division with world-renowned programs in the biological sciences, a preeminent biomedical research enterprise and two top-tier hospitals, UCSF Medical Center and UCSF Benioff Children’s Hospital.