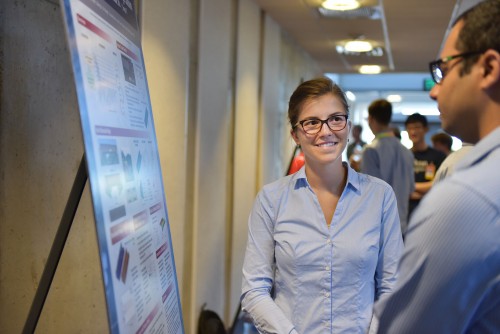 Anela Bajric, a graduate student at Denmark Technical University and a participant in Sandia National Laboratories’ NOMAD Summer Research Institute, discusses the results of her research on detecting damage on railroad bridges, a nonlinear system

Newswise — ALBUQUERQUE, N.M. — How many engineers does it take to study two steel bars bolted together?

“The heart of NOMAD is that the problems we’re trying to solve in nonlinear mechanics and nonlinear dynamics are too large to be solved by a single researcher at a single institution. My idea was to create some mechanism for graduate students to come in, learn the basics of research in these fields, develop networks and collaborations and really get inspired,” said Matt Brake, Sandia mechanical engineer and founder of the NOMAD Summer Research Institute.

Over the course of the six-week institute held at the University of New Mexico’s Manufacturing Training and Technology Center the students — mentored by about 30 Sandia engineers and external faculty members — pounded and prodded, modeled and simulated the two-piece three-bolt steel bar.

A simple steel bar is well understood at a mathematical level. How it responds to stress and where it might break can be calculated with a pretty high degree of confidence. However, by cutting the bar in two and bolting it back together, all the rules change. It becomes “nonlinear.” Understanding nonlinear systems is important because practically everything outside a textbook is nonlinear: bridges, cars, airplanes and bicycles. NOMAD also is investigating how other nonlinear systems wear out or break; this year’s theme was “Friction, Fatigue, and Failure.”

Scott Smith, a graduate student at the University of Maryland, Baltimore County and a year-round intern at Sandia, has attended the institute all three years. He said he keeps coming back because he likes doing the experiments and enjoys meeting people from around the world and escaping the mid-Atlantic humidity.

Long Wu, a graduate student at the Delft University of Technology, met Brake at a conference and heard about the institute. “I thought this is a good chance to collaborate with people from different universities and different countries.” Wu said, “In my Ph.D. project, I can only talk with my adviser; everyone else is doing different research. I think this is a good chance for us to share our knowledge.”

Martin Buck, a graduate student at the University of Stuttgart, heard about the institute from a colleague who had attended the first two years. Buck came to NOMAD hoping to learn about improving the understanding and implementation of interface reduction methods, network with experts in the field and learn whether he wanted to stay in academic research or go into industry after he graduates.

A new facet of NOMAD is a science, technology, engineering and math (STEM) education outreach project. Frustrated by the lack of diversity among the mechanical engineering applicant pool, Brake set out to inspire local high school students from under-represented groups to consider science and engineering.

As part of NOMAD, 11 high school students were hired as Sandia interns. They assisted the graduate students with the experiments and administered a cross-cultural psychology research survey for Brake and his collaborator Gergana Todorova at the University of Miami. But the students also played around with engineering software tutorials and participated in student-directed lectures.

“I want to give the students around here a chance to learn about the engineering sciences and the social sciences. Engineering is not something scary where you have to be an expert in mathematics; it’s something that you can do,” said Brake. “Despite the stereotypes, engineers are real people. We have a lot of fun. We get to play with cool software and do cool experiments.”

Kestrel Kiegel, a senior at Albuquerque High School, thinks NOMAD is a really cool summer job. She enjoyed helping the graduate students with their experiments and added, “The grad students are really nice.”

Ricardo Smith, a senior at Atrisco Heritage Academy High School, really liked the engineering software tutorials. One tutorial focused on a 3-D model of a teapot that he used to explore how to design and model smooth surfaces, something trickier than building with cubes.

Once the students completed the tutorials, they designed streamlined objects that would efficiently use less building material but stay strong. The objects ranged from cymbals, chairs, bridges, skateboards and even high-heeled shoes, depending on the students’ interests.

Rob Kuether, the future head of the institute, said, “I hope that NOMAD will produce cutting edge research in the area of nonlinear mechanics and dynamics, and provide further insight into some of the technical challenges faced by mechanical engineers. These discoveries will hopefully advance the engineering sciences to allow a variety of industries to design and manufacture new products with improved safety and reliability along with enhanced performance. In addition, I’d like to see the collaborations formed within NOMAD eventually lead to future joint efforts in answering other challenging research problems.”