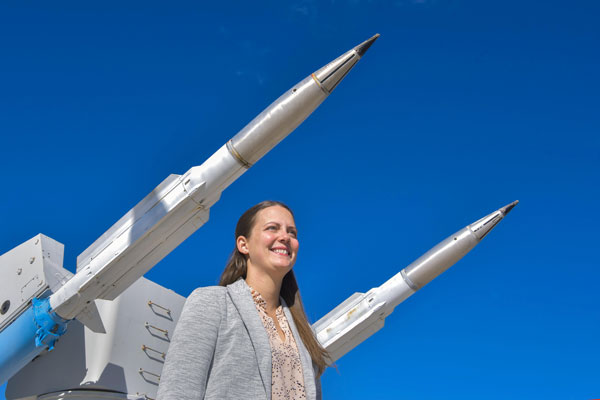 Newswise — ALBUQUERQUE, N.M. — With the resiliency and determination that earned her the U.S. Air Force call sign “Fenix,” Capt. Justine Wolff is using her position as an Education With Industry student at Sandia National Laboratories to better herself and the Air Force.

“How great of an opportunity this is to understand our lab partners,” she said. “It’s good to get the word out to get high-quality officers here to learn and take that knowledge back. There is so much I’m learning here that’s just improving my career and will serve the Air Force.”

Wolff is the second Air Force fellow paired with Sandia in the Education With Industry program, which matches participants with commercial company leaders in their career field. Wolff is the Air Force’s second 21M munitions and missile maintenance officer to be selected for the program — both have been hosted by Sandia’s Military Liaison group.

“Sandia is an excellent company for a munitions and missile maintenance professional to partner with,” Wolff said. “I look forward to expanding my aperture on both strategic relationships in the nuclear deterrence arena and understanding how Sandia contributes to global and national security.”

With more than 11 years in the Air Force and having worked on three continents, Wolff brings a wealth of experience to Sandia. During her first weeks at Sandia, she assisted with facilitating and training students from all over the U.S. nuclear enterprise and took the lead to conduct nuclear stockpile orientation training for the new commander of the Air Force Nuclear Weapon Center at Kirtland Air Force Base.

“Our goal is to immerse Justine in Sandia nuclear weapon mission areas, such as U.S. nuclear stockpile sustainment and surveillance and annual assessment, as well as research and development for life extension programs here and at other locations, such as Pantex and Kansas City National Security Campus,” said systems engineer Mark Meyer with Sandia’s Military Liaison group.

“We are extremely impressed with Capt. Wolff and want to give her a hearty welcome to the Sandia and Kirtland team,” Meyer said. “When she returns to the USAF after 10 months, Justine will have gained a much clearer understanding of how her military requirements for safe, secure and reliable nuclear weapon systems, test gear, handling gear and joint technical publications support our nation’s nuclear triad.”

As a 21M munitions and missile maintenance officer she will use this Education With Industry experience to enhance mission readiness and combat capability for the land-based intercontinental ballistic missiles and air delivered systems, which are two-thirds of the U.S. nuclear triad deterrent mission, Meyer said.

Munitions and missile maintenance officers are responsible for formulating and implementing maintenance procedures that ensure Air Force weapons capabilities are well-maintained, accounted for and logistically available to the warfighter both stateside and abroad.

The experience and fortitude to be called ‘Fenix’

Wolff has had assignments in Japan, Germany and most recently Northern California. Her last assignment before joining Sandia was as the Operations Officer, 9th Munitions Squadron at Beale Air Force Base in California. She was second in command of the Air Force Combat Ammunition Center’s Planning and Production Course and Air Force Senior Officer Munitions Course, providing more than 70,000 hours of academic instruction annually. She was also involved in the development of Air Force Munitions Doctrine as well as tactics, techniques and procedures for combat munitions production directly influencing overseas contingency operations.

It was at an advanced sortie production training course at Nellis Air Force Base near Las Vegas earlier this year that Wolff earned the call sign “Fenix,” an alternative spelling for the mythological bird, phoenix, that arises from ashes to regenerate. Wolff was a distinguished graduate of the training course.

She embraces the call sign Fenix, calling it her “spirit animal” and adding, “No matter what life demands, I’ll awaken, rise above and recreate.”

Wolff, who grew up in Syracuse, New York, enlisted in the Air Force in 2008 as a logistics planner and deployed to Afghanistan in support of Operation Enduring Freedom. She received a Scholarship for Outstanding Airman to the Reserve Officer Training Corp. She received her Air Force commission in 2013 from California State University, Sacramento, and was a distinguished graduate with a Bachelor of Arts degree.

Education With Industry is administered by the Air Force Institute of Technology on behalf of the Secretary of the Air Force, Acquisition. The program sends Air Force officers and enlisted personnel on a 10-month career-broadening tour with a selected company to observe and learn cutting-edge technology and innovative management processes. The program started in 1947, the same year the Air Force was established. Sandia Labs joined the program last year.

In this 73rd Education With Industry class, 45 companies — including Amazon, Delta Air Lines Inc. and UPS Inc. — will support 76 Air Force fellows selected by a personnel board in a competitive process. The program’s stated intent is to broaden and expose selected personnel to the commercial logistics, system design, engineering and industrial maintenance experience. Graduates return to the Air Force and provide first-hand knowledge of how leading firms accomplish best practices to help establish more effective and efficient processes within the Air Force.