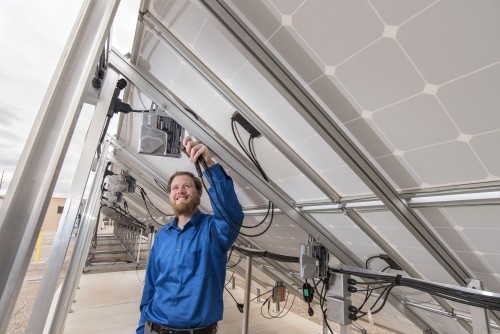 Newswise — ALBUQUERQUE, N.M. – Sandia National Laboratories has been awarded a three-year, $2.5 million award to help utility companies better visualize, manage and protect power systems as they include increasing numbers of distributed energy resources (DER) such as wind and solar.

The project creates open-source advanced distribution management system (ADMS) algorithms that help grid operators better assess the status and health of their power systems. The algorithms will be added to commercial management software to allow utilities to optimize distributed energy resources so they can better manage voltage fluctuations and protect the system from faults.

“The project will create the world’s first demonstration of an open-source, secure, resilient, optimization platform,” said principal investigator Jay Johnson. “The algorithms aggregate field data like inverter data, data from smart meters and industrial control (SCADA) data from utilities, to generate an accurate picture of how the whole system is doing. With that information, the ADMS can adjust the behaviors of individual devices to make the whole system more efficient and safe,” Johnson said.

The project is principally focused on making a lot of small devices, like microinverters on rooftop photovoltaic installations, work together to solve specific problems with high penetrations of renewables. To mitigate the voltage fluctuations from DERs, utilities currently can either add expensive voltage regulators to manage the swings, or they can have the DER devices themselves do that job, Johnson explained.

By intelligently controlling DER functionality, Johnson said, utilities can increase the deployment of variable generation without the need to purchase and install voltage regulators.

“Being able to see the whole system at a glance is increasingly important because, as a greater percentage of power on the grid comes from distributed resources, there can be greater swings in voltage,” Johnson said. “Most utilities do not have real-time, customer-level voltage information available to them right now.”

Partners on the project include the Georgia Institute of Technology, BPL Global, the National Grid and the Public Service Company of New Mexico (PNM).

The software algorithms developed by Sandia in partnership with Georgia Tech will be put into a commercial software package and will first be validated and refined at Sandia’s Distributed Energy Testing Laboratory (DETL). As part of the project, Sandia will collaborate with a major national solar company to strengthen their cybersecurity posture by applying Sandia’s Information Design Assurance Red Team (IDART) tools on an emulation of a system control network. The results of this work will be released as industry best practices and used as the starting place for a new DER cybersecurity working group being launched with this project.

In the third year of the project, the DER management software will be deployed at PNM and the National Grid utility installation in the Northeast.

When finished, the software will be released as an open-source product via an online repository for the source code created by SunSpec Alliance, a trade group for solar energy companies.

The DOE SunShot Initiative is a national effort to drive down the cost of solar electricity and support solar adoption. SunShot aims to make solar energy a low cost electricity source for all Americans through research and development efforts in collaboration with public and private partners. Learn more at energy.gov/sunshot.