Sandia to put nuclear waste storage canisters to the test

Scientists will explore science of cracks caused by corrosion

The canisters began arriving at Sandia National Laboratories in mid-November. 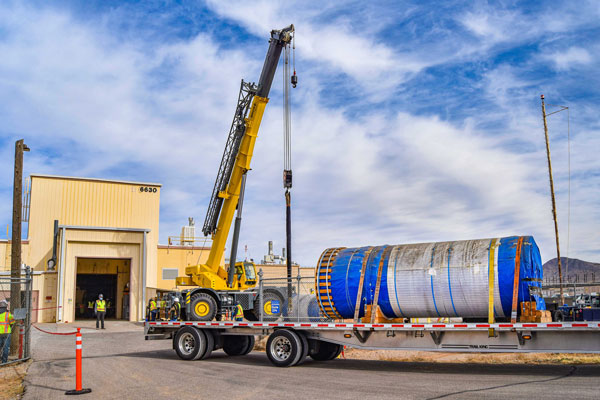 Sandia National Laboratories is putting nuclear waste storage canisters to the test during a multi-year Department of Energy-funded project.

The three canisters, which arrived in mid-November and have never contained any nuclear materials, will be used to study how much salt gathers on canisters over time. Sandia will also study the potential for cracks caused by salt- and stress-induced corrosion with additional canisters that will be delivered during the next stage of the project.

Currently there is not an operating geologic repository in the U.S. for the permanent disposal of spent nuclear fuel. As a result, spent fuel is being stored at commercial nuclear power plants in both storage pools and dry storage canisters. The storage canisters currently holding the spent nuclear fuel were designed to have a useful life of a few decades but will now likely need to be used longer than planned, said Tito Bonano, Sandia’s nuclear energy fuel cycle senior manager.

Data is urgently needed to validate and guide how industry should manage storage canisters for longer than originally anticipated, Bonano said.

“Salt can be present in the ambient air and environment anywhere, not just near the ocean. We need to be able to plan for extended long-term storage of spent nuclear fuel at nuclear power plants for the foreseeable future — it’s a national reality,” he said.

The three-year project is funded by the Department of Energy’s Nuclear Energy office. Overall, fifteen never-used, never-irradiated DOE-owned canisters are being distributed for large scale testing to Sandia and two other national laboratories, an industry research institute and an independent storage facility at an existing nuclear power plant.

Nuclear power plants use uranium pellets inside a metal-cladded tube, called a fuel rod, to power reactors to create the heat needed to make electricity. After the fuel rods can no longer be used in the reactor, they need to be stored onsite until they are taken offsite to another facility and eventually permanently disposed because they will be radioactive for a long time, said Samuel Durbin, a mechanical engineer and Sandia’s canister project lead.

“When fuel is removed from a reactor, it’s very hot, both in temperature and radioactivity” Durbin said. “The utility loads it into a pool for about five years to cool down. After that, the spent fuel can be offloaded into a dry storage canister.”

A storage canister starts as a flat piece of stainless steel that is rolled into a cylinder and then welded where the seams come together. The heat from the welding creates heat-affected zones in the seams of the canister that experience tensile, or pulling, stress. This stress makes these areas around the welds more susceptible to corrosion from salt over time, said Durbin.

Research will test how much salt deposits on canisters over time

Sandia received three canisters Nov. 13. The research team will outfit each of them with 32 electrical heaters to simulate the decay heat, which is heat released as a result of radioactive decay, from the 32 spent fuel assemblies that would typically be stored in this type of canister. No radioactive materials will be used in the testing, Durbin said.

Instruments called thermocouples, which measure temperature, and other sensors for diagnostic testing and surface sampling also will be added, he said.

Once the outfitted canisters have been tested and repacked for transport at Sandia, the team plans to move them to a storage pad at an independent spent fuel storage installation on the West Coast where they will experience the same real-life conditions of in-use canisters. The Sandia team, led by managers Sylvia Saltzstein and Geoff Freeze, Durbin, and chemists/corrosion scientists Charles Bryan and Rebecca Schaller, along with partners from other national laboratories will monitor the test canisters and record surface deposits, especially chloride-bearing salts, for three to more than 10 years, depending on how much the data varies over time.

“Sodium-chloride, or salt, that settles on the surface of spent nuclear-fuel canisters can lead to chloride-induced stress corrosion cracking, and right now there is inadequate data on these surface deposits,” said Durbin.

In real-life storage of nuclear waste, Durbin said the decay heat from the spent fuel creates natural convection around the storage canisters, causing outside air to be drawn over the canister surface. This process helps cool the spent fuel over time. As ambient air is drawn in, salt and other particulates in the air are drawn in as well and can settle on the canister surface. During the test, the electrical heaters installed inside the canisters at Sandia will replicate this decay heat-driven convection without using nuclear materials.

In hot, dry conditions, Durbin said salt deposits alone don’t cause any issues, but over time, as the decay heat decreases and the canister cools, water can condense on the canister surface and a brine can form.

“These conditions can occur nationwide and are seen as precursors to chloride-induced, stress-corrosion cracking. Back when these canisters were being designed, people weren’t thinking about this as an issue because we had a plan for permanent disposal. The current national nuclear waste situation forces canisters to be stored onsite for the foreseeable future, which could be 100 years or longer, so stress corrosion cracking becomes more of a concern,” Durbin said.

In addition to the long-term heating and surface deposition test, Sandia will use up to another three canisters for laboratory-based tests to conduct fundamental research on cracking caused by salt and stress, especially on the welded seams and intersections of the canisters. Researchers will measure the effectiveness of commercially available crack repair and mitigation coatings.

To test these seams, the team will cut the canisters into small segments and test pieces with and without welded seams to study the pre-cursor conditions for salt and stress to cause the corrosion that leads to cracks, he said.