Spring has sprung—but it took a while this year.

Newswise — Spring greenup in Brookings came about a month later than in past years, according to senior scientist Xiaoyang Zhang of the Geospatial Sciences Center of Excellence at South Dakota State University. He and his colleagues have been using environmental satellite data to track vegetation during the growing season since 2000.

“There is high inter-annual variability,” Zhang said. The trees started leafing in early May this year, but this occurred in mid-April the last few years and even as early as late March in 2012.

The researchers track green leaf-on in the spring and brown leaf-off in the fall, which is called phenology, using data from sensors aboard different satellites, two that are reaching the end of their lifetime and another which was launched in 2011.

“We can monitor when crops start to germinate and then blossom and even when the corn silk comes on,” Zhang explained. This data can identify when and where drought and disease outbreaks, such as a pine beetle infestation in the Black Hills, occur.

The geospatial scientists characterize vegetation phenology using 500-meter resolution images from moderate resolution imaging spectroradiometers (MODIS) aboard the Terra and Aqua satellites and, more recently, from the Visible Infrared Imager Radiometric Suite (VIIRS) on the Suomi National Polar-orbiting Partnership satellite. During the next few decades, they will monitor phenology from VIIRS on the NOAA Joint Polar Satellite System series, with the first of four satellite launched in late 2017 and the remaining three scheduled for 2022, 2026 and 2031. This is part of NASA-funded research to provide a long-term global land surface phenology product.

“We use reflectance in visible through near infrared spectral bands,” Zhang explained. The researchers verified the accuracy of satellite observations using field images taken during 2013 and 2014 through an ecosystem phenology web camera network called PhenoCam. This network uses more than 200 high-resolution cameras positioned across the United States to monitor the vegetation canopy.

“We use the digital pictures to analyze seasonal vegetation growth and compare those to the satellite measurements,” he said. The field images are focused on individual areas, while satellite imagery provides a wall-to-wall view.

“The onset of spring is more readily detectable than the onset of autumn,” reported Zhang in an article for Science Trends. “Autumn is more complex because of the mixture of colors,” he said.

The satellite observations more closely mirror the PhenoCam images in areas where the vegetation is similar—forests, followed by grasslands and then croplands.  Savannas are the most challenging because they contain many plant varieties.

About the Geospatial Sciences Center of Excellence

The Geospatial Sciences Center of Excellence (GSCE) is a joint collaboration between South Dakota State University and the United States Geological Survey's National Center for Earth Resources Observation and Sciences (EROS). The purpose of the GSCE is to enable South Dakota State University faculty and students, and EROS scientists to carry out collaborative research, seek professional development, and implement educational programs in the applications of geographic information science. 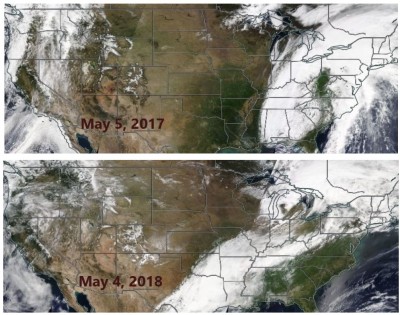 Caption: This satellite image shows the difference in spring greenup on May 5, 2017 and May 4, 2018. Green shows vegetation, brown is soil or dead vegetation and white is cloud cover. In South Dakota, green is barely seen in the 2018 image, while a larger share of the land surface is green in the 2017 image. 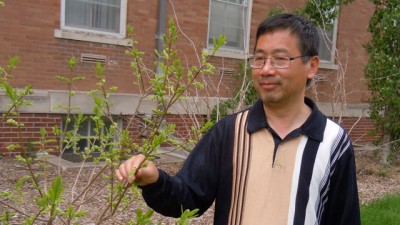 Caption: Senior scientist Xiaoyang Zhang of Geospatial Sciences Center of Excellence at South Dakota State University, explains that this bush near Wecota Hall is one of the later-greening plants. Since 2000, he and his colleagues have been using environmental satellite data to track the growing season, including spring greenup.