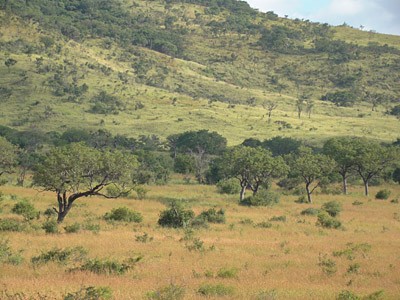 A single global model can't predict savanna tree density as well as continent-specific models, according to research published in Science this week. Photo of a South African savanna courtesy of Dr. William Hoffmann, a co-author of the study.

Newswise — A “one-size-fits-all” model to predict the effects of climate change on savanna vegetation isn’t as effective as examining individual savannas by continent, according to research published in Science this week.

Savannas – grasslands dotted with trees – cover about 20 percent of the earth’s land and play a critical role in storing atmospheric carbon, says Dr. William Hoffmann, associate professor of plant and microbial biology at North Carolina State University and co-author of the study.

“We wanted to find out what controls savanna vegetation – essentially the density of trees within the savanna – and whether we can use a single global model to predict what will happen to savannas if global temperatures rise,” Hoffmann said. “We found that the rules determining tree density are fundamentally different among the three continents studied – Africa, Australia and South America. That means a ‘one-size-fits-all’ approach won’t work.”

The researchers examined more than 2,100 sites in savannas across the three continents. They found that tree density was influenced by a number of different factors, including moisture availability, temperature, soil fertility and frequency of fires. Yet the power of these relationships differed significantly among the three continents.

“For example, greater moisture availability – a combination of rainfall, rainfall seasonality and drought indices – meant greater tree density in Africa and Australia, but it had almost no relationship with tree density in South America,” Hoffmann said.

Not surprisingly, he added, the study showed that fire reduces tree density.

But the researchers found some strong counter-intuitive relationships between rainfall and fire frequency, namely that more moisture meant more fires. Hoffmann explained that more rainfall in a savanna meant faster-growing grasses, which meant any fires in that savanna would have ample fuel to spread quickly and easily.

The researchers also modeled what would happen to tree density if the mean annual temperature increased by 4 degrees Celsius. Because tree density is controlled differently on the three continents, the study predicts different responses to global warming. In Africa, tree density is predicted to climb in hotter temperatures, while it is expected to decline in Australia and Africa. These differences, Hoffmann says, could not be predicted if savannas are assumed to behave identically across the tropics.

Caroline E.R. Lehmann of Macquarie University in Australia led the study. Researchers from some 20 universities around the globe contributed to the work.