Saving the Lesser Prairie Chicken: What Landowners Should Know

The recent U.S. Fish and Wildlife Service announcement, listing the lesser prairie chicken as a threatened species, brings to mind how agricultural producers, livestock ranchers and those with land enrolled in CRP could be affected. 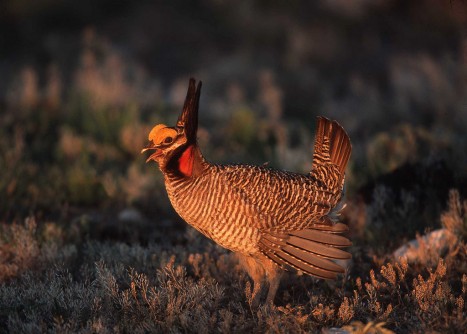 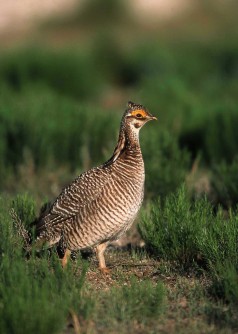 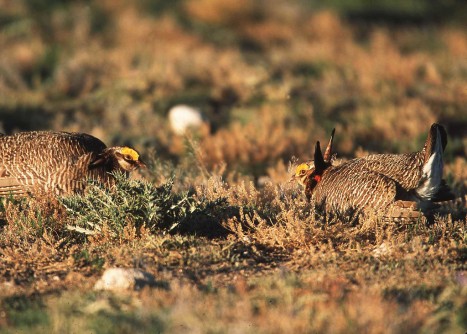 Newswise — MANHATTAN, Kan. – Cumulative habitat loss, encroachment by invasive woody plants, wind energy development, petroleum production and the ongoing drought are just a handful of reasons why there are fewer lesser prairie chickens in the wild today, according to the U.S. Fish and Wildlife Service, which recently announced the species as threatened under the Endangered Species Act.

K-State Research and Extension wildlife specialist Charlie Lee said the designation of the lesser prairie chicken as a threatened species has been anticipated for some time. The U.S. Fish and Wildlife Service’s announcement in late March will go into effect the first full week in May, following a 30-day public comment period.

The U.S. Fish and Wildlife Service reported that last year, the range-wide population of the lesser prairie chicken declined to a record low of 17,616 birds, an almost 50 percent reduction from the 2012 population estimate. The five states included in that range—Texas, New Mexico, Oklahoma, Kansas and Colorado—have a conservation plan in place with a population goal of 67,000 birds range-wide for a 10-year average.

“That doesn’t mean that we have to go from the current estimate of about 17,000 birds up to 67,000 one year, and then having once exceeded the goal, change the status again,” Lee said. “It means having 67,000 birds consistently for a 10-year timeframe.”

Lee said the listing might pose a challenge for some landowners, particularly in western Kansas, where the lesser prairie chicken lives. Significant habitat changes must occur to meet the 67,000-bird decade goal, and those changes will most likely have to come from livestock ranchers and grazers implementing conservation practices that benefit lesser prairie chickens. More normal rainfall patterns would also be beneficial.

Most crop producers will not be affected by the listing, he said, because the section 4(d) rule of the Endangered Species Act exempts most routine farming activity to protect the lesser prairie chicken, including agricultural practices on cultivated lands that are in crop production, as well as maintenance of infrastructure on these operations.

“However, they decided as part of the rule that properly managed grazing is important for lesser prairie chickens, and improperly managed grazing can impact them in a negative manner,” Lee said. “Haying of native grass might not be allowed. It’s not specified, but I think it could probably be implied, that a grazing plan could be required.”

Lee said he anticipates ranchers will face more changes for grazing, including possibly allowing only a certain number of livestock on a particular piece of rangeland and limiting the length of time they are allowed to graze, for the numbers of lesser prairie chickens to increase. It is speculation right now if producers will be required to have a grazing management plan in place, but Lee said that is how he interprets it if ranchers want the protection afforded by the 4(d) rule.

“The way I read the rule, the ranchers might be more affected than crop producers in this particular situation,” Lee said. “When you look at it, the lesser prairie chicken uses cropland for a minor amount of food certain times of the year. Rangeland is the primary habitat, and that is where most changes are going to have to take place.”

How about the landowners who have acres enrolled in the Conservation Reserve Program (CRP)? Rod Winkler, program specialist for CRP, U.S. Department of Agriculture’s Farm Service Agency (FSA) in Kansas, said the U.S. Fish and Wildlife Service has been working with the FSA to ensure implementation of all aspects of CRP has an overall positive impact on habitat for the lesser prairie chicken.

The U.S. Fish and Wildlife Service, in conjunction with the FSA, has been developing a conferencing document, or biological assessment, the past several months, Winkler said. The document should be completed soon.

“Most of the land in Kansas is privately owned,” he said. “Voluntary actions of private landowners are the key to maintaining, enhancing, restoring and connecting habitat for the species.”

Winkler said minimizing the effects of the listing on landowners, along with providing assurances and predictability within the conferencing effort with U.S. Fish and Wildlife Service on CRP, is important for voluntary landowners’ continued participation or future enrollment in the program.

The protections for CRP participants within the conferencing document, he said, provides assurances to participants during the CRP contract period and beyond expiration, by permitting them to make management decisions on their land regardless of whether that decision is to retain the permanent grass cover or convert back to crop production. The basis for this assurance is if one landowner makes the decision to convert the cover back to annual crop production, there will likely be another landowner making the decision to enroll land in CRP, which creates a balancing effect.

The effort has been, as much as possible, to keep the impact on CRP participants within the lesser prairie chicken region the same as those outside the region, Winkler said.

“There will, however, be some differences in a couple of areas, such as early land preparation,” Winkler said. “At the end of some contracts, early land prep can begin as early as May 1. We do not believe the U.S. Fish and Wildlife Service will allow policy to permit action that early. It will be more in line with the end of the nesting season.”

Pushing early land preparation back allows for the lesser prairie chicken to fulfill its nesting and brooding season, which begins April 15 and goes through July 15, said Andy Burr, state biologist for Kansas’ NRCS.

Burr said many landowners who are in their final year of their CRP contracts are questioning now how early land preparation could be affected by the lesser prairie chicken threatened species listing. Early land preparation requests are accepted by the FSA. If destruction of the CRP cover is determined to cause adverse environmental effects, then the CRP participant must obtain an approved conservation plan from the NRCS for destruction of the CRP cover for planned crop production.

The conferencing document produced by the U.S. Fish and Wildlife Services, with input from the FSA, will provide more answers on how CRP in Kansas will be affected due to the listing. In the meantime, those who are interested in learning more about the listing and how their land might be affected, can log on to the lesser prairie chicken website through K-State Research and Extension (http://www.ksre.k-state.edu/p.aspx?tabid=275), which provides more information and other useful links. 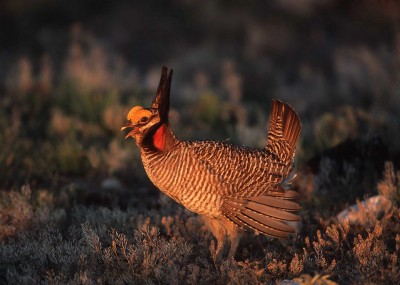 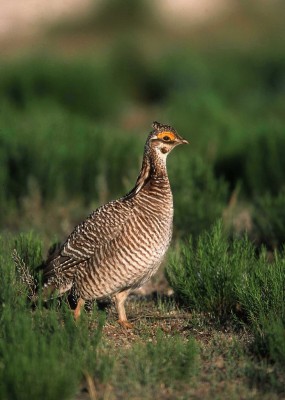 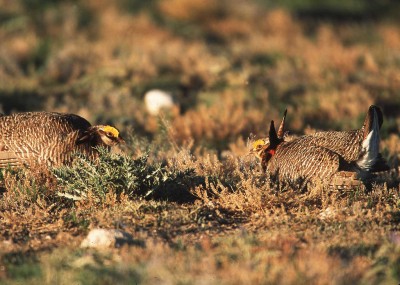