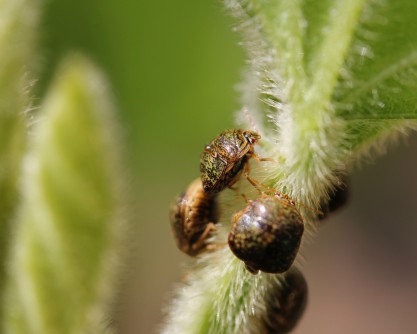 The kudzu bug, though small, decimates on average 20% of crop yields in South Carolina and Georgia. 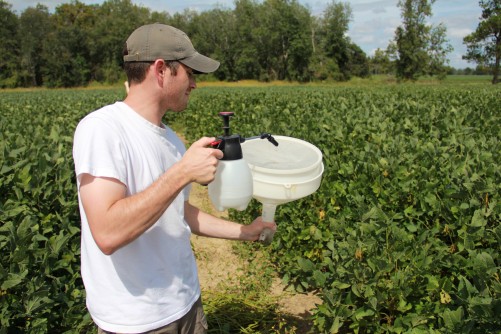 The kudzu bug originated in east Asia and India and showed up in Georgia, Bray’s home state, in 2009. And like its viney plant namesake, the kudzu bug has earned a negative reputation.

“Everybody in Georgia knows about the kudzu bug,” Bray says. Since the bug is attracted to white surfaces, “Anyone with a house painted white has tons of bugs all over it.”

The pest, with its piercing, sucking mouthparts, also brings a taste for soybean plants, a cash crop worth $40 billion a year in the United States. The bug’s invasion has led to crop losses of almost 20% in states like Georgia and South Carolina. Bray’s research through the University of Georgia investigated the bug’s destruction of soybeans—and how to protect the crop.

Some wild relatives of soybean have developed resistance to insect pests after being exposed to them over the long term. The adapted plants have slowly built defense mechanisms against pests. Some damage a bug’s ability to reproduce or to get enough nutrition. Others have altered their appearance, smell, or taste so bugs don’t find them appetizing anymore.

Bray hoped the soy wild relatives would also be able to protect themselves against the kudzu bug. Through his field experiment, Bray discovered that a few strains were able to fight the kudzu bug by limiting the ability of its nymphs, or young, to survive. Bray says the next step is to identify which gene gives the soybeans this defense mechanism.

Scientists study plant resistance in the hopes of cultivating and nurturing plants that can survive the onslaught of pests without a heavy dose of chemicals. Not only is a plant’s natural defense less toxic to the wider environment, it’s less expensive. These are important factors to consider since insecticide use on soybeans quadrupled from 2004 to 2014.

Bray also developed a kudzu bug damage rating for soybeans. This will help plant breeders and farmers get a picture of how resistant a particular strain is to the pest.

“I wanted to develop a visual scale so that a soybean breeder could easily walk out into the field and say on a scale of one to 10 what’s the most stem-damaged plant and what’s the least,“ explains Bray.

In order to develop the damage scale, Bray, with the help of many lab members, meticulously counted the number of kudzu bugs on each plant. In the past, researchers have shaken the plants over white sheets to count them. “But these guys fly around, so it’s hard to get an accurate count,” Bray says. His technique was to dip the plant in a bucket of water and immobilize the bug. “Going forward other breeders can just use our rating scale instead of counting every single bug.” Despite this unpleasant task, studying the kudzu bug did have some perks. It allowed Bray to travel to China to learn from other scientists working with similar species. “The bug offered a lot of opportunities for me to learn, even if it’s a pest,” he said.

Read more about Bray’s research in Crop Science. Bray’s work was done as a graduate student under Zenglu Li & Wayne Parrott. Funding was provided by the United Soybean Board and the Georgia Soybean Commission. For an up-to-date distribution map showing the spread of kudzu bug since 2009, see http://www.kudzubug.org/distribution-map/.