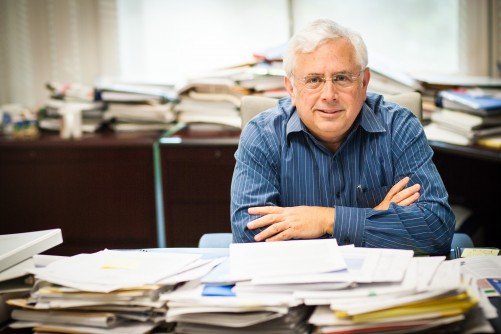 Ronai, a member of several NCI panels and current co-leader of the Scientific Advisory Committee for the Melanoma Research Foundation, has made many key contributions to the understanding of cancer over the last 35 years. Early in his career, he and his team developed a sensitive assay allowing detection of cancer-driving mutations present at very low frequency, providing the initial grounds for today’s precision medicine. Most recently, his research has identified new drug targets that may improve the outcome of patients with drug-resistant melanoma tumors.

The NCI award will allow Ronai’s team the freedom to perform more ambitious studies and take the time to translate basic discoveries into the clinic.

“We will continue investigating how tumors become rewired to withstand harsh conditions, such as low oxygen, starvation, and chemotherapy,” said Ronai. “Understanding these mechanisms is likely to establish new paradigms and offer novel therapeutic modalities for cancer.”

Ronai plans to continue his studies on epigenetic changes associated with altered signaling transduction pathways in melanoma, breast, and prostate tumors. His research aims to understand changes in cellular machines that control key cellular processes, such as protein translation and responses to stress, that account for tumors’ aggressive characteristics. In particular, this work will focus on mechanisms that govern tumors’ ability to acquire resistance to therapy or their propensity to metastasize. He actively pursues advancement of these fundamental discoveries to new therapies, largely in collaboration with SBP’s Conrad Prebys Center for Chemical Genomics.

OIA DescriptionThe National Cancer Institute (NCI) Outstanding Investigator Award (OIA) is a new grant program developed by NCI in 2014 that will provide funding to investigators with outstanding records of productivity in cancer research to continue or embark upon new projects of unusual potential in cancer research over an extended period of seven years. The Award was developed to provide investigators with substantial time to break new ground or extend previous discoveries to advance biomedical, behavioral, or clinical cancer research.

NCI anticipates funding approximately 50 OIAs from the first round of applications submitted in 2015. Award recipients are cancer researchers, nominated by their institutions, who have served as a principal investigator on an NCI grant for the last five years and have demonstrated outstanding cancer research productivity. The OIA provides funding of up to $600,000 in direct costs per year for seven years.

About Sanford Burnham Prebys Medical Discovery InstituteSanford Burnham Prebys Medical Discovery Institute (SBP) is an independent nonprofit research organization that blends cutting-edge fundamental research with robust drug discovery to address unmet clinical needs in the areas of cancer, neuroscience, immunity, and metabolic disorders. The Institute invests in talent, technology, and partnerships to accelerate the translation of laboratory discoveries that will have the greatest impact on patients. Recognized for its world-class NCI-designated Cancer Center and the Conrad Prebys Center for Chemical Genomics, SBP employs more than 1,100 scientists and staff in San Diego (La Jolla), Calif., and Orlando (Lake Nona), Fla. For more information, visit us at SBPdiscovery.org. The Institute can also be found on Facebook at facebook.com/SBPdiscovery and on Twitter @SBPdiscovery.