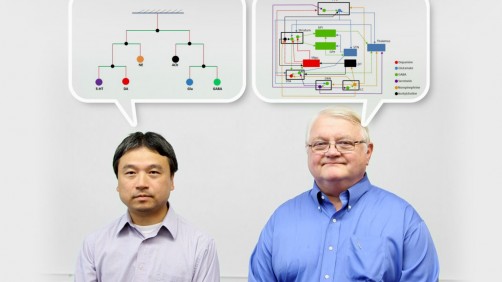 Researchers Zhen Qi and Eberhard Voit data-mined the collective scientific knowledge on a key schizophrenia symptom and engineered a brain chemistry simulator around it.

Users read the results of brain chemistry simulations with ease via a colorful mobile. 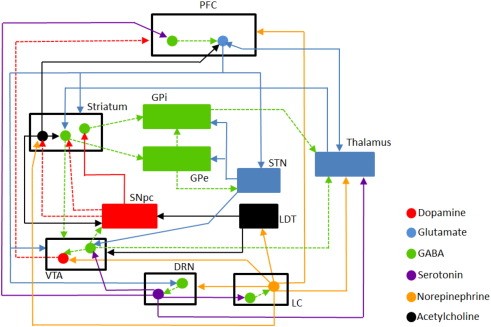 The simulator emulates the brain chemistry of the schizophrenia symptom that disrupts working memory. Data were mined on brain chemistry and regions they coordinate with. The data were then unified and run through differential equations before a program was constructed around them. 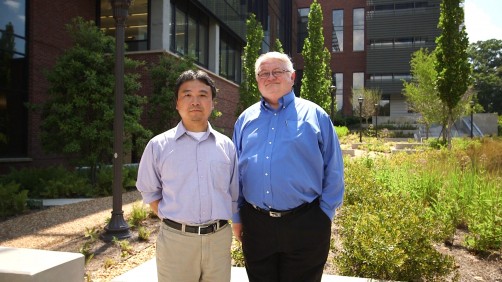 Newswise — It’s called mental imbalance for a reason. Sanity hangs, in part, in the gentle balance of chemicals strung together within regions of the brain in an intricate matrix.

In schizophrenia, the matrix is sharply jarred, debilitating the mind and triggering hallucinations. Now, researchers at the Georgia Institute of Technology have created an interactive model of that matrix to fast-track research and treatment of the tormenting disorder.

It uses massive amounts of research data to simulate major systemic chemical changes in the brains of schizophrenia sufferers but depicts them in simple, colorful graphics.

Clinicians could use it to help patients and their loved ones better understand the chemical underpinnings of the disease and therapeutic alternatives. And researchers could test out hypotheses virtually, quickly and easily, and get a better overall sense of the disease.

The forest, not the trees

Research on schizophrenia can be a bit compartmentalized.

“Most researchers study a disease from their own specialty’s focus and perspective. Then they may form a hypothesis based on dopamine or glutamate or some other single neurotransmitter,” said research engineer Zhen Qi from the Wallace H. Coulter Department of Biomedical Engineering at Georgia Tech and Emory University. “Our model integrates all neurotransmitter systems.”

The research results have been published and are also to appear in print in the journal Biochimica et Biophysica Acta (BBA) – General Subjects. The work is funded by the National Institutes of Health, the National Science Foundation, and the Georgia Research Alliance.

There are a handful of neurochemicals most people have already heard of in connection with mental well-being.

Who hasn’t read articles encouraging us all to eat more chocolate in hopes it will make us cheerier by boosting dopamine and serotonin?

Serotonin is subtler, and has mainly auxiliary functions. It sometimes counteracts dopamine’s effects. Norepinephrine is also well-known, though often mistakenly referred to as adrenalin (which is actually epinephrine).

Together with other substances, these neurotransmitters help regulate the activities of at least 11 regions of the brain to do things like orchestrating parts of consciousness, including what’s called “working memory.”

Qi and his team built the computational model around the neurochemistry behind that cognitive function, which goes badly awry in schizophrenia.

Working memory is short-term recollection that lends the mind coherence. It remembers what we saw, said or did seconds ago and what we want to do seconds from now.

Hallucinations may be the eye-catching, popularized symptom of schizophrenia, but the disease’s impairment of working memory, though less attention-grabbing, arguably debilitates sufferers more.

“Working memory deficits disrupt storing and processing of information as basic as letters and numbers, and they hinder the recall of stored information,” Qi said. “That makes learning and planning difficult.”

The researchers found that there is a stark lack of medical treatment for this symptom.

“Cognitive symptoms were actually associated with schizophrenia before symptoms like hallucinations became the focus,” said Eberhard Voit, a Georgia Tech biomedical engineer and a Georgia Research Alliance eminent scholar, who supervised the modeling effort. “Yet, drugs for schizophrenia mainly target the latter symptoms.”

Two neurotransmitters, glutamate and gamma-aminobutyric acid (GABA) are crucial to working memory in their coordination of two brain regions, the dorsal prefrontal cortex and the basal ganglia.

Glutamate boosts nerve transmission, and GABA tones it down, and it’s important for the two to strike a balance. But other neurotransmitters associated with additional brain regions also tug at that balance.

They all hang together much like in a mobile over a baby’s crib. Bump one substance, and it knocks a whole system out of whack.

This makes it challenging for a psychiatrist to adjust a patient’s prescriptions and predict what the overall effects might be. That’s where Qi’s and Voit’s computational model comes in.

The Georgia Tech researchers collected studies on brain chemistry in schizophrenia from nearly 50 labs around the world, and mined the data.

To interpret them, they consulted researchers who have dedicated their lives to exploring schizophrenia and they fed the information into differential equations representing relationships between neurochemical systems.

They arrived at a novel map of the brain chemistry behind working memory dysfunction in schizophrenia. “That is new, this map. It reflects the collective knowledge of the scientific community,” Voit said.

“With the information assembled, we wrote code to implement this model,” Qi said. The result is a program of the neurochemical matrix that’s easy to use.

Users can input varying levels of neurotransmitters, and the matrix model simulates the labyrinthine domino effects they have on each other. But the output to the user is much simpler, even playful.

“What the user sees is a mobile tilting back and forth,” Voit said. Color-coded dots on the mobile represent neurotransmitters. If doctors or researchers tug at one, the others follow until a new state is reached.

“The mobile looks simple, although it takes into account the underlying complex interactions among neurotransmitters that determine the nodes in the mobile,” Qi said.

With a few months’ work, a graphic user interface could be constructed to allow doctors and researchers to easily use Georgia Tech’s new computational model.

The more new research data other scientists add, the better Qi and Voit will be able to optimize the system and connect isolated pockets of knowledge from labs around the world to a greater whole for the greater good.

Gina Yu from Georgia Tech; Felix Tretter from the Bertalaniffy Center for the Study of Systems Science in Vienna, Austria; Oliver Pogarell from the University of Munich, and Anthony Grace from the University of Pittsburgh co-authored the paper.The research was funded by grants from the National Institutes of Health P01-ES016731, the National Science Foundation MCB-1517588 and an endowment from the Georgia Research Alliance. Any opinions, findings, conclusions or recommendations expressed in this material are those of the authors and do not necessarily reflect the views of the sponsoring institutions. 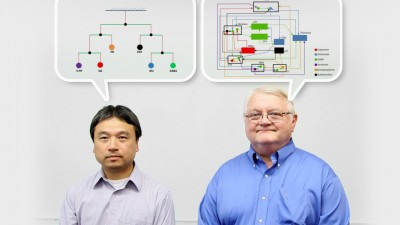 Caption: Researchers Zhen Qi and Eberhard Voit data-mined the collective scientific knowledge on a key schizophrenia symptom and engineered a brain chemistry simulator around it.

Caption: Users read the results of brain chemistry simulations with ease via a colorful mobile. 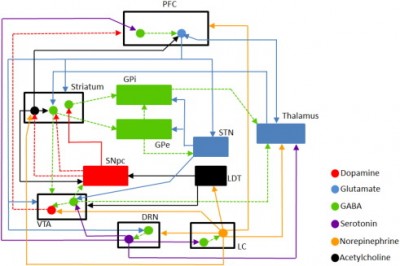 Caption: The simulator emulates the brain chemistry of the schizophrenia symptom that disrupts working memory. Data were mined on brain chemistry and regions they coordinate with. The data were then unified and run through differential equations before a program was constructed around them. 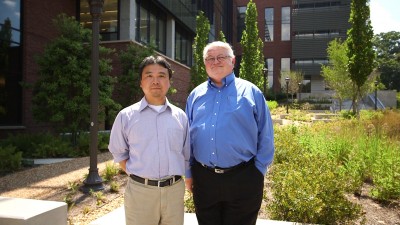