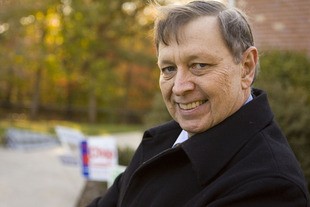 The chaos of the 2000 presidential election in Florida demonstrated the crucial role that voting machines played in shaping the outcome of that election. But Bryan Pfaffenberger believes there is value in understanding that the interaction between technology and culture has been going on for more than a century.

Pfaffenberger, a historian of science and an associate professor at the University of Virginia's School of Engineering and Applied Science, is studying the history of mechanical-lever voting machines. His research focuses on the machines' introduction in New York State in 1892 to 1925, when the technology was employed throughout the state.

By showing how first-generation voting machines enabled national party elites to reduce the autonomy of localities, Pfaffenberger is helping to resolve a long-lasting controversy among political scientists and historians about who was responsible for the sweeping electoral reforms that characterized the 1890s.

A recent, $27,000 grant from the National Science Foundation is allowing Pfaffenberger to pursue archival research on the topic. Already, he has found that scholars have all but ignored the history of voting machines, which he finds surprising given our politically obsessed culture.

"It's almost as if this subject wasn't even explored until the 2000 presidential election," he says. "After that, voting technology suddenly mattered to folks."

Why is Pfaffenberger's current research focused on New York? Not only were voting machines first used in upstate New York, but also the Empire State led the nation in adopting voting machines. In 1927, 80 percent of the votes cast in New York were cast mechanically; the nearest competitor, Indiana, used voting machines in only 20 of 92 counties.

Pfaffenberger's study has already turned up some surprises.

It's well known that, throughout the United States, the decade of the1890s was roiled by ballot reform specifically, implementation of the Australian or secret ballot, a process marked by controversy. Election districts had to choose from three different Australian ballot designs, each of which had differing implications for the balance of political power between local political interests including the likes of New York City's notorious Tammany Hall and national party elites.

In New York, unlike the rest of the country, the Australian ballot was implemented largely on voting machines, not on paper. New York's voting machines embodied a design that strongly favored the interests of national party elites while undermining local political autonomy. Because the design was mechanically embodied, and could not be easily or cheaply altered, national party elites strongly backed the machines and local political organizations, including Tammany Hall, strongly opposed them.

Pfaffenberger's study is part of a larger Democracy and Technology program that he is developing with colleagues in the University's Department of Science, Technology and Society an initiative that has already sparked several cross-University collaborations and additions to the curriculum.

"It's fitting that this initiative is underway at the university Thomas Jefferson founded," says Pfaffenberger. "Jefferson strongly believed that engineers need to be good citizens; today, the need is greater than ever, so it's important for science and engineering students indeed, students throughout the University to reflect on how technologies shape our democracy."

More than a century after issues of electoral reforms were first raised, the controversy over the presidential voting in Florida continues to reverberate. Earlier this year the U.S. House of Representatives passed a bill that would require every state to use paper records permitting voters to see that they had correctly cast their votes. At the same time, electronic voting systems used in California were shown to be vulnerable to hacking.

Clearly, the role of machine voting technology will continue be front and center, not just during off-year elections but especially as the 2008 presidential election nears.